In Iowa 2016, the Iowa State Fair (top) opened on Thursday and will continue through next Sunday, Aug. 21. During 1886, Lucas Countyans were looking forward to early September and the first state fair to be held on brand new grounds in east Des Moines. The fair had moved to Des Moines in 1878 after bouncing from city to city in eastern Iowa since 1854. Now, it was ready to settle down. Here's the little article about the upcoming fair published in The Democrat of Aug. 19:

"(The Iowa State Fair Association) has now a permanent home at the Capital of state --- Des Moines. The first fair on the new grounds, which contain 266 acres of fine timber and prairie lands, will be held September 3-10. Magnificent buildings have been erected to meet the increasing demands of exhibitors. Every arrangement has been made to meet the wants, comfort and convenience of all who come to visit this great fair of the West.

Weather conditions in Chariton, Des Moines and elsewhere across the state were hot and dry that August --- it hadn't rained since Memorial Day. But there still was a good deal of optimism about the crops.

The Democrat reported on Aug. 19 that, "Decoration Day, Sunday, May 30, was our last rain about Chariton. That will be eleven weeks next Sunday. In those eleven weeks there has not been sufficient rain to fairly lay the dust. Lightning has scarcely been seen or thunder heard. A burning sun and brassy sky by day, almost invariably followed by cool nights, and these cool nights are what have made Iowa life endurable. And yet our corn-fields are green, and many men are still insisting that they will have a fair crop. Lucas county thus proves, as it has never proved so thoroughly before, its wonderful powers to withstand drought."

Elsewhere on its principal news page, The Democrat published Gustavus Hinrichs' Iowa Weather Bulletin for July, 1886, datelined "Aug. 4, Central Station of the Iowa Weather Service," then located on the University of Iowa Campus in Iowa City.

Just in case you'd forgotten, Hinrichs, a professor of natural philosophy, chemistry and modern languages at the University, had founded the first state weather and crop service in the United States there some years earlier.

Among other things, Hinrichs reported that "July, 1886, was hot and extremely dry; calms greatly prevailing .... Tuesday, the 6th, was the hottest day record in Iowa, when at the Central Station the temperature of the air reached 101 degrees .... Though continued very hot days prevailed, sunstrokes did not occur because the air was at the same time extremely dry.... While this dryness of the air made the high temperature endurable to man and beast, it greatly increased the harmful effects of the drought on vegetation.... The rainfall has been absolutely zero at a number of stations, and a mere trifle at many others....

"The number of clear days was without precedent, and caused the like extraordinary daily range of temperature. Haze, often dense, was common. The light squalls that reached southeastern Iowa raised only dust, but brought no rain. The sun's disc was generally red and sharply outlined, even long before it reached near the western horizon, and thus presaged another dry day for the morrow.... The northern lights of July 27 were very fine, and recorded at a number of our stations, they were promptly followed by atmospheric disturbances breaking the great drought." 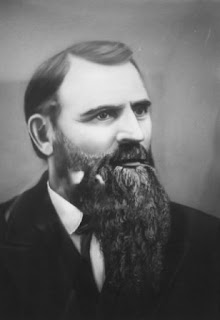 The huge news across Iowa during early August had been the assassination on Aug. 3 in Sioux City by liquor interests of the Rev. George C. Haddock (left), pastor of that city's First Methodist Church and a noted anti-saloon crusader. Sioux City at the time was Iowa's roughest and rowdiest city with some 75 saloons, several breweries and a considerable number of gambling venues and brothels, all operating illegally.

Down at Russell on Wednesday, Aug. 11, there had been a community meeting at First Baptist Church, chaired by J. H. Cook, to allow Lucas Countyans to express their outrage about Haddock's murder, even offer themselves as volunteers to go to Sioux City and help if force were required to bring order.

As background --- the Iowa legislature had passed during 1883 what was known as the "Clark Law," making the sale of liquor in Iowa illegal. That was legislative reaction to an Iowa Supreme Court ruling that the state's 1882 constitutional amendment banning intoxicants was, in fact, unconstitutional.

Results of the amendment and the legislative act were mixed, but in Sioux City both had simply been ignored. Enter the crusading preacher, the Rev. Mr. Haddock, who arrived during 1885 to serve Sioux City Methodists, and to do his best to close the saloons down.

His efforts ended about 10 p.m. on Aug. 3 when he was gunned down in front of a considerable crowd in the streets of Sioux City. Witnesses later identified the shooter as John Arensdorf, foreman of the Franz Brewing Co. He was tried twice for murder, the first trial ending in a hung jury; the second in acquital, after which the defendant and some jury members went out together for a night on the town.

These were not among Iowa's shining moments in the continuing quest for justice.

Back in Russell on the 11th, long before the principal suspect in the shooting had been apprehended in Davenport, where he was being sheltered by his Knights of Pythias brethren, the assembled crowd passed a series of resolutions, including the following:

"RESOLVED 2nd, That we deplore the fact that there should be within the borders of our State a community with public sentiment so debauched as to give comfort to the lawless and encourage secret and open resistance to a law enacted in obedience to the voice of our commonwealth, and that we charge this crime not only upon the miscreant who fired the fatal shot, but also upon a faithless officiary in the local government, and upon a class of citizens who are more ready to truckle to the basest elements of society rather than resist, and more than all, upon the saloon system which is the hot-house of diabolical plots and dark conspiracies.

"RESOLVED 3rd, That the voice of our brother's blood crieth unto us from the ground to be bold and aggressive in our advocacy of the right, fearless in our opposition to the wrong, and faithful to the best interests of humanity; and that we do here and now pledge our lifelong fidelity to the sacred cause of Prohibition, and that we will do all in our power for the overthrow and extermination of the saloon business."

The resolutions were written by a committee of three, all of whom signed off on them: J.E. Nichol, A.J. Woodman and Geo. W. Riker.

So far as I know, no Lucas County crusaders actually headed for Sioux City. And today, even in Russell where when I was a kid it was proudly announced that there were no bars in town, the occasional saloon can be found. If these establishments are hotbeds of diabolical plots and dark conspiracies --- such has not been called to my attention.