Sheriff Gaylord Lyman and his grandson 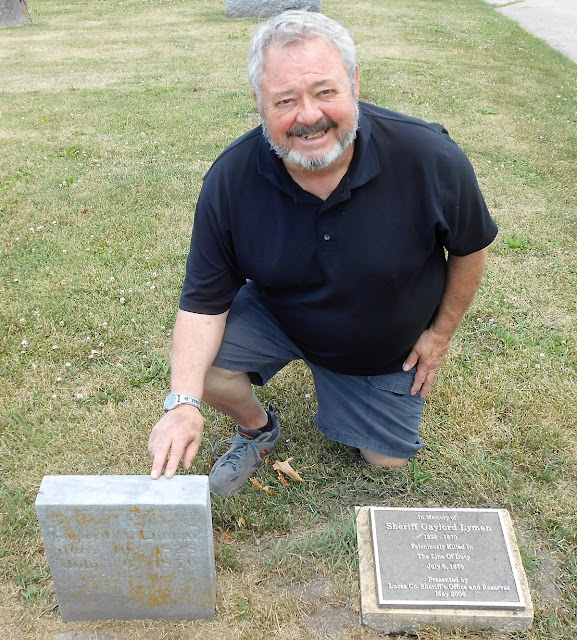 The account of Sheriff Gaylord Lyman's death from a gunshot wound on July 6, 1870, and the lynching that night of his killer, Hiram Wilson, is one of Lucas County's most familiar stories. But the family he left behind is sometimes overlooked in the retelling.

So I was really happy on Tuesday to be able to take the sheriff's grandson (a few generations removed) --- Tim Blanchard of Iowa Falls --- to the gravesite after he had visited the museum looking for related artifacts (sadly, we have none, other than a photograph of the sheriff's widow, Marinda, in front of the family home on South Grand Street).

Tim could have found the grave easily himself --- it's located just to your right not far inside the main gate of the Chariton Cemetery. But I wanted to be able to take this photograph.

Those who have heard the story may remember that Sheriff Lyman confronted the suspected horse thief in a saloon just off the southeast corner of the square on the morning of July 6. Wilson then shot the unarmed sheriff in the street outside and fled.

Lyman was taken to his small home two blocks south (on property now occupied by Fielding Funeral Home) where he died just before 10 p.m.

Meanwhile, a group of men had assembled and pursued Wilson into woods east of town where he was captured, taken to the Lyman home to be identified by the still-conscious sheriff, then confined to a room on the second floor of the 1858 Lucas County Courthouse.

Shortly after news of Lyman's death reached the square after 10 p.m., an angry mob broke into the courthouse, grabbed Wilson, put a rope around his neck and threw out him a window. You can read the story in considerably more detail here.

During the years that followed, Marcella married Frank Phillipi and they moved west to California, and on June 24, 1875, the widow Marinda married John Farber, a prosperous farmer with many children in the Freedom neighborhood whose first wife had died during 1867.

This marriage was not a success, however, although they did have a daughter, Anna. John and Marinda separated shortly after Anna's birth and Marinda moved her Lyman family back into Chariton where both she and Anna used the surname Lyman thereafter. Marinda died in Chariton on Feb. 8, 1911, and was buried by Gaylord's side.

Sons Ellis and William married, raised families and lived out their lives in Chariton, Ellis dying in 1906 and William, during 1938.

Tim Blanchard is descended from William L. Lyman and his wife, Laura, via their daughter, Mabel, who married William A. Blanchard of Russell. The Blanchards were living in Belle Plaine when Mabel died during 1951, but both are buried near Gaylord and Marinda in Chariton.

Nellie Lyman married Albert H. Fanning and they moved to California, too, as did Marinda's daughter, Anna, who married Clarence Froggatt. I've not been able to determine exactly what became of Edwin "Eddie" Lyman, although he predeceased his brother, William. 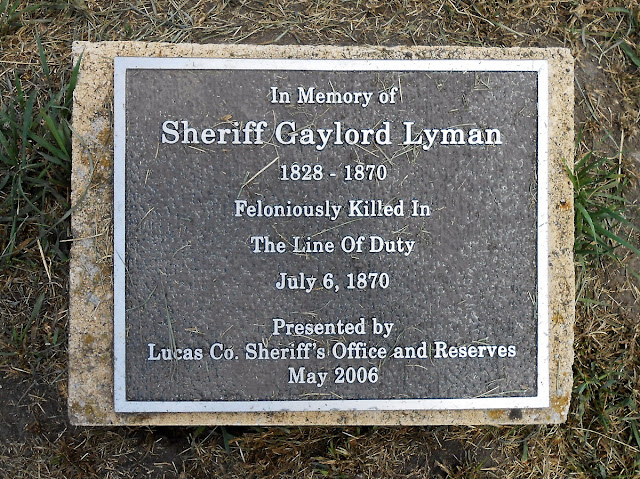 I'm sure you're right, Karen. Edward (or Edwin) was known only as "Ed" or "Eddie" in Chariton, so "Edwin" was taken from the obituary of his brother, William.