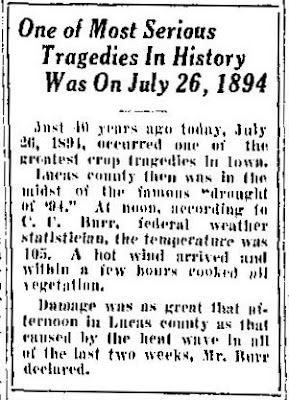 I didn't intend to get stuck for two days straight on the weather, but happened upon the small article at left while reading over the weekend about the drought and extreme heat that struck Lucas County (and much of the rest of Iowa) during 1934. It was published on the front page of the Chariton Herald-Patriot of July 26, 1934, and reads as follows:

"Lucas county then was in the midst of the famous 'drought of '94." At noon, according to C.C. Burr, federal weather statistician, the temperature was 105. A hot wind arrived and within a few hours cooked all vegetation.

"Damage was as great that afternoon in Lucas County as that caused by the heat wave in all of the last two weeks, Mr. Burr declared."

In search of more information, I went back to The Patriot of Aug. 2, 1894, but found only the following brief report:

"Thursday, July 26, 1894, will never be forgotten in Lucas county while a man, woman or child lives who suffered from the terrific heat of the sirocco-like wind which came from the southwest and blew at a speed of thirty miles an hour, scorching and withering everything it touched. It was the climax to  the terrible drought which has been so disastrous this summer. Reports from all parts of Iowa show that the hot winds were general all over the state. It was a most alarming visitation, the like of which has never been seen or felt in the state. The thermometer ranged from 102 to 111 in the shade."

The "Iowa Weather and Crop Report" for the week of July 31 also was published in that edition of The Patriot and it noted that, "The past week has been the worst of the season. The daily temperature averaged seven degrees above the normal. On the 26th the temperature ranged from 100 to 107 degrees, with winds 20 to 35 miles an hour --- the severest in its effects upon vegetation every known in Iowa."

During the week prior to the great wind, several prominent men of Chariton, including the venerable Warren S. Dungan, had called in W.S. Swisher of Lincoln, Nebraska, a rainmaker.

In return for $500, Swisher "promised to bring about a rainfall of one inch covering an area of country extending 10 miles each way, Chariton being the center, within a period of five days. If the promised rain did not come, no money was to be paid."

Those attending a meeting with Swisher at the courthouse took up a collection, raised the $500 and Swisher set to work --- his methods were not specified.

"It was in every way a praise-worthy act," The Patriot opined, "and if productive of hoped for result would greatly benefit thousands of people."

Alas, "the rain did not come --- that is according to contract. Monday, south and west and north and east, refreshing showers fell, but in, and within two or three miles of Chariton, there were very light showers. Just how much the rainmaker had to do with it, we are not sufficiently posted to say.

"At all events, he failed to cause the prescribed amount of rain within the stipulated time, and therefore cannot draw the five-hundred dollars."