The grandfather of Iowa blue laws 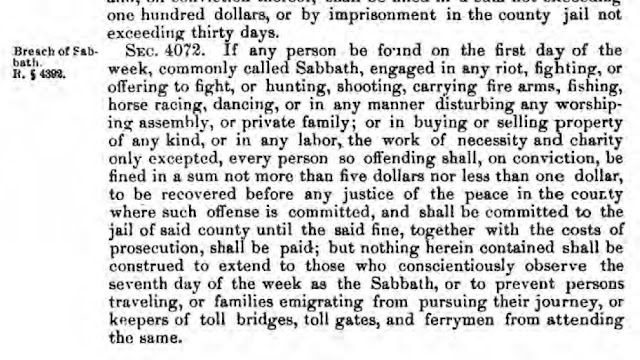 Not many read the Iowa Code for entertainment, but I did a little of that last week while looking for legislation protecting Iowa's songbirds authored during 1870 by Charles Aldrich and published first in the Code of 1873.

Not far away, as Section 4072 in Chapter 12, "Offenses against the public place," I found the grandfather of Iowa blue laws, which dated from the 1850s. Here's how it reads:

"If any person be found on the first day of the week, commonly called Sabbath, engaged in any riot, fighting, or offering to fight, or hunting, shooting, carrying fire arms, fishing, horse racing, dancing, or in any manner disturbing any worship assembly, or private family; or in buying or selling property of any kind, or in any labor, the work of necessity and charity only excepted, every person so offending shall, on conviction, be fined in a sum not more than five dollars nor less than one dollar, to be recovered before any justice of the peace in the county where such offense is committed, and shall be committed to the jail of said county until the said fine, together with the costs of prosecution, shall be paid; but nothing herein contained shall be construed to extend to those who conscientiously observe the seventh day of the week as the Sabbath, or to prevent persons from traveling, or families emigrating from pursuing their journey, or keepers of toll bridges, toll gates, and ferrymen from attending the same."

No one is quite sure why laws of this sort --- practically universal across the United States at one time and still in force in some instances --- are called "blue" laws. They were not printed on blue paper, as some have suggested. The most likely explanation is that "blue" was used first by critics to denote prudery.

Although rarely, if ever, enforced, this law remained on the books in Iowa until 1955, when it was rescinded by the Iowa Legislature during the term of progressive Republican Governor Leo Hoegh, a Chariton boy.

I believe it is still unlawful under the Iowa Code, however, to buy or sell motor vehicles on the Sabbath. Other Iowa "blue" laws have in the past governed liquor sales on a statewide basis and a variety of other activities via local ordinance. There was considerable fuss not that long ago among our Dutch neighbors to the northeast, in Pella, before Sunday commerce finally was allowed.

And blue laws have been upheld as constitutional several times --- unless it could be shown that they were aimed at limiting activities of a specific class of people. Several other states and and some local governments still have them.

Personally, I'd have a terrible time getting through the Sabbath without a stop after church at Hy-Vee where, I believe, it is possible to experience the transcendent in the produce section --- on a good day. And I do consider mowing the lawn a work of both necessity and charity (toward the neighbors).