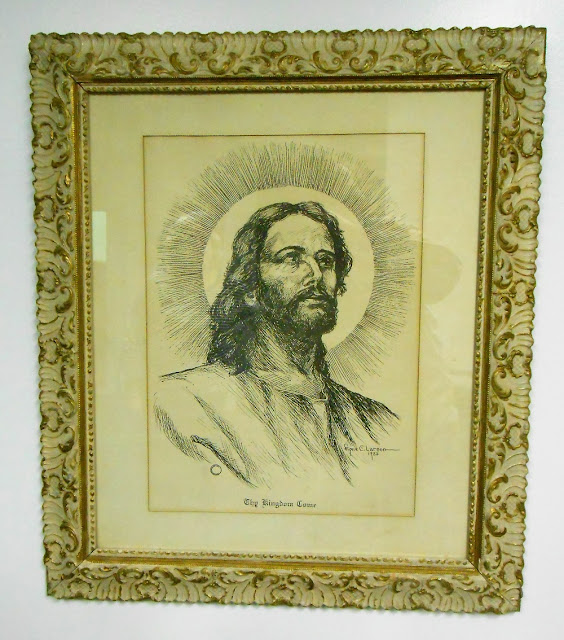 Brenda Crossfield, pastor of Chariton's First and Corydon's Christ the Servant Lutheran churches, caught my attention Monday when she posted to Facebook a photo of this 1933-34 drawing, "Thy Kingdom Come," that hangs in the church library in Chariton. I believe there's another in Corydon and, most likely, in many  other churches Lutheran and otherwise across the heartland.

This probably was the most popular image of Christ --- in the Midwest, at least --- until Walter Sallman came along in 1941 and spat out his slick and highly polished gentleman Jesus (left), formally entitled "Head of Christ," which went out of control and spread everywhere. I call Sallman's version, "Jesus Awaiting a Root Canal."

The artist who produced "Thy Kingdom Come" was Signe Elizabeth Larson, who was confirmed at First Lutheran in Chariton on March 28, 1926, and received her first communion there the following Sunday --- during the pastorate of the Rev. Carl E. Lundgren.

Signe's Jesus looks as if he might know something about being a savior; Sallman's guy, like he's just sucked on a lemon.

Miss Larson was a very talented artist who by now has slipped into obscurity --- although her work still is marketed and collected --- but her backstory involves some of southern Iowa's most interesting places and exciting times. Beyond that, she was a woman who proved that what some might consider a handicap was not a barrier to achievement.

With names like "Signe" and "Larson," you know this woman was serious Swede --- and serious Lutheran, too. She was born on Oct. 16, 1908, in the legendary Monroe County coal mining town of Buxton where her parents, John Emil and Josephine (Peterson) Larson, operated a general store. The family lived in the far northeast corner of Buxton in an area called East Swede Town. The youngest of four children --- Elmer, Elvira, Hilmer and Signe --- she was born deaf.

A majority of Buxton's population was black, but many other varieties of humanity were represented and there were many Swedish miners and a lively Swede community, too. The remarkable thing about Buxton was --- everyone got along just fine.

The Larsons previously had operated a store in the coal mining boom town of Muchakinock, in Mahaska County. When the Consolidated Coal Co. moved its operations from Muchakinock to Buxton about 1900 --- the entire town moved, including the Larsons and their church building, originally known as Muchakincock Lutheran Church but reborn in Buxton as Ebenezer Lutheran Church.

J.E. and Josephine Larson, wishing the best for their youngest daughter, sent her at age 5 to the McCowen Oral School for the Deaf in Chicago, where she learned to speak --- to a degree. After completing the McCowen program she was enrolled at the Central Institute for the Deaf in St. Louis. It was in St. Louis that her artistic potential was fully recognized and upon graduation from Central Institute she was awarded a scholarship to study art at Washington University.

Meanwhile, back in Iowa, the Buxton mines began to be close as the 1920s advanced and not long after 1920, the Larsons moved farther west to the Haydock mining camp just east of the Lucas-Monroe County line where they bought a farm, built a new house and opened another store. Three villages flourished briefly here as Buxton turned into a ghost town. Josephine Larson died at Haydock during 1924.

There was no Lutheran church at Haydock, its neighbor, Bucknell, or nearby Consol; instead, a  mission operated by First Lutheran Church of Chariton that included a regular Sunday school, but irregular worship services. By this time, transportation by car was convenient, and First Lutheran in Chariton became the official home for Lutherans in far west Monroe County. J.E. Larson was one of the leaders of the Haydock mission.

And that's why Signe was confirmed at the Chariton church during the early spring of 1926, when she was 16.

During 1927, J.E. Larson and his children moved west to Lindsborg, Kansas, so that Signe and her siblings could attend Bethany College --- founded in 1881 by Swedish immigrants and affiliated today with the Evangelical Lutheran Church in America.

One of the attractions at Bethany was Birger Sandzen, a painter native to Sweden who taught and headed the art department at Bethany from 1894 until his retirement in 1946. Signe earned her bachelor of fine arts degree from Bethany under his tutelage during 1933 and continued her art studies, primarily during summers, for many years --- at the Colorado Springs Fine Arts Center, University of Colorado at Boulder, University of Washington, University of Minnesota and the Chicago Art Institute.

Sandzen was known to the Larson family in part because a 7-by-10-foot painting of his, Christ at Gethsemane, had been commissioned to hang above the altar at Ebenezer Lutheran Church in Buxton. That church and the painting survived until 1954 when both were destroyed in a fire.

Signe's image of Christ entitled "Thy Kingdom Come" --- executed as pencil sketches and then in oil during 1933 and copyrighted in 1934 --- launched her career. By some estimates it has been reproduced more than a million times in media ranging from pencil and print to oil. Signe herself reproduced it several times herself upon special request.

In practice, however, she painted in many media and undertook a variety of subjects during her long career, especially landscapes, also the specialty of her mentor, Birger Sandzen.

Signe's older sister, Elvira, became her life partner in work and mission --- and during March of 1931, they launched a joint 43-year career of presenting what they called "sacred illustrated messages" in thousands of churches across the United States and Canada --- including at First Lutheran in Chariton, which continued to be the home congregation of the women's kinfolk, the Almkuists. Signe provided the artwork; Elvira, the narrative.

Here's a description of how Signe worked, taken from the Bloomington, Illinois, Pantagraph of Sept. 4, 1957.

"Together the sisters present an unusual program. Pastel pictures, 36 x 48 inches in size, including her head of Christ, are produced before the audience. Attractiveness of the pictures is enhanced by a system of slowly changing colored lighting effects. Unusual effects are produced by the use of luminous crayons and blacklight." 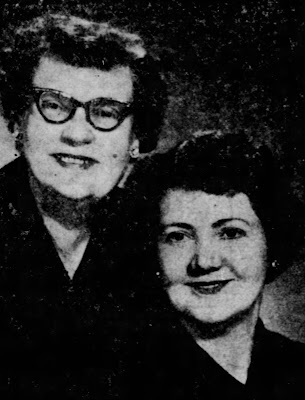 And here's the photo of the Larsons sisters, Elvira on the left and Signe on the right, that accompanied the article from which that paragraph was taken.

The women retired to their home in Lindsborg during the mid-1970s and in 1981 moved to Cordova, Nebraska, to live near a niece who assumed responsibility for their care. Elvira died at age 86 during December of 1986 and Signe passed on Dec. 4, 1993, at a care center in Friend, Nebraska, age 85. Both are buried in the Zastrow Cemetery at Cordova.

Many examples of Signe's art work, both religious and secular, may be found online by anyone who cares to do a name search.
Posted by Frank D. Myers at 6:54 AM

You are a master sleuth, Frank! A lot of that info on Signe I knew--it's somewhere in the archives of the church--possibly on the back of the picture, but you went far beyond what we knew of her as a Lutheran. Really enjoyed reading this, I've always admired that picture and had asked questions about it. It hung until recently in the library at church. Miriam Hibbs knows a lot about her and I'm pretty sure had met her. I'm so glad you found the picture of the two sisters.

Thank you for the post, I enjoyed reading this. Signe Larson is part of my extended family, particularly my grandfather's cousin. It's very possible her deafness was a recessive gene that has been carried through the family for many generations. I was born Deaf too with a recessive identified gene after having my second Deaf child, we got that confirmation. I've always admired Signe's art of Jesus in my parents bedroom growing up, she has several art pieces with our family too. As I discovered her more through google, the more I admire her for her devotion to art and being successful as a Deaf person. Deafness is indeed not a disability but an opportunity for us.

Wish I had the opportunity to meet her once. Thank you for helping her existence to be more purposeful through this blog.