So where is Pvt. John H. Stanley buried? 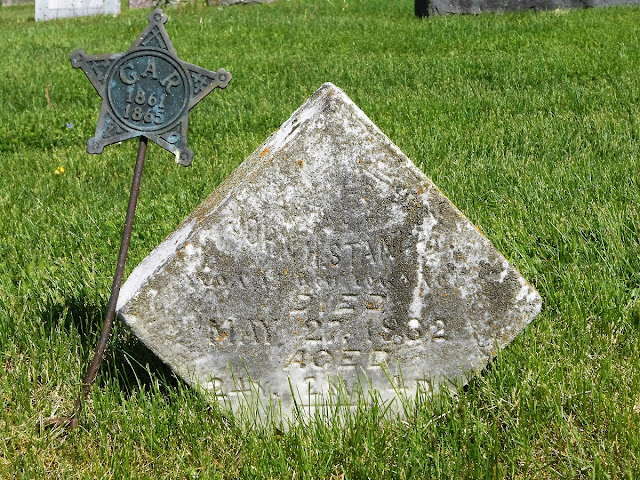 This is the Chariton Cemetery tombstone of John H. Stanley, who died at age 24 on May 27, 1862, at a military hospital in Keokuk of complications --- more than likely infection --- from a shoulder wound sustained two months earlier, on April 6 or 7, 1862, during the Battle of Shiloh. One of the minor puzzles of life (and death) --- are his remains buried here or is it merely a cenotaph, erected in his memory by a grieving family?

John, whose parents were Robert H. and Nancy (Scott) Stanley, was born in Indiana, then moved with his family to Pike County, Illinois. At some point between the reported 1856 death of his mother and 1859, when his father remarried in Lucas County, the extended Stanley family --- including a couple of married sons and their families, moved west to Chariton.

When the 1860 federal census was taken, John was living in Chariton with his brother and sister-in-law, Robert and Eveline Stanley; their two young children, Emma and Henry; his older brothers, James and David Stanley; and a niece, Nancy Stanley, age 13. The patriarch of the family, Robert H. Stanley, was living in Benton Township with his second wife, Margaret (Sutphin) Hobson, and some of her children.

John enlisted as a private in Company C, 13th Iowa Volunteer Infantry, at Chariton on Sept. 28, 1861, and was mustered in Burlington a month later, on Oct. 28.

His company was one of four at Shiloh the following spring that included men from Lucas County. The others were Company B and Company E, 6th Iowa, and Company I of the 8th. After the battle was over, he was among the hundreds sent upriver to military hospitals in Keokuk for treatment of wounds.

It certainly is possible that family members were present when he died, claimed the body and brought it home to Chariton, although that would have been a daunting prospect. The trip to Ottumwa could have been made by rail, but beyond that only wagon transportation was available.

Chariton Cemetery records --- reconstructed some 40 years after John died --- suggest that his remains are buried here and state that he died of "soldier wounds."

The remains of soldiers who died in the Keokuk military hospitals usually were buried in a portion of the city cemetery that later was given to the federal government and became Keokuk National Cemetery. There is no grave there for John, however, unless he was one of the 26 among more than 600 Civil War-era burals whose remains were unidentified. That absence could be seen as affirmation that his body was indeed claimed and taken elsewhere.

Truth of the matter is, we'll probably never know for sure --- excavation motivated by curiosity in a cemetery is frowned upon. But it is something to speculate about.

Have someone dowse (witch) the supposed grave. Then you'll know if someone is there. Really. It works.

Excavating the grave really wouldn't be necessary beyond taking the top off the grave shaft to see if a grave shaft exists. When you dig a hole and refill the hole in the ground, nothing goes back in the way it came out so there will be a rectangular stain of where the grave was dug showing in the undisturbed soil. You might be able to do this simply by using a coring probe and laying out the core and comparing it to one from undisturbed ground nearby. If the color isn't the same going down say two feet, it probably is a grave. If it stays the same, well then it is undisturbed and no grave exists there. Some believe if you go over a grave with two bent wires in your hands and the wires cross as you go over the shaft a burial exists. I have seen it done, but I have not been able to confirm that it is accurate. I watched a grave witch do this in Washington, Iowa in an old cemetery that should not have had room for a road. He walked over the roadway and his wires crossed methodically where there would have been graves and the stones were there but no space for a grave except for where the road was. I'd say go play with some bent wires and see what you get!