Her children rise up and call her blessed .... 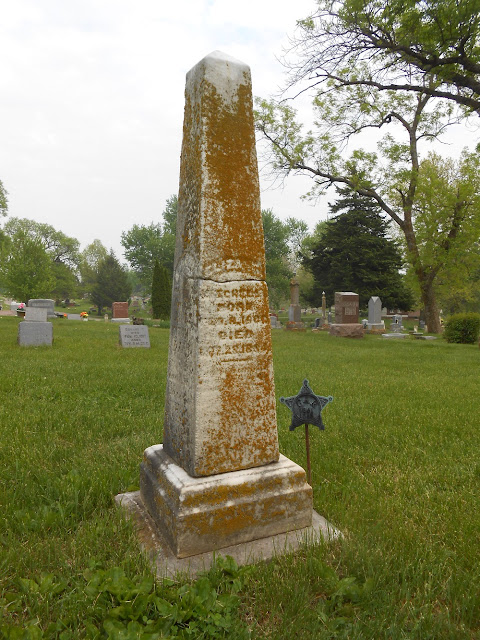 There are a couple of notable things about Eliza Frances Mitchell's obituary, published in The Chariton Democrat-Leader of December 3, 1884, which I set aside a while back for use on Mothers Day.

In the first place, it is long and detailed --- although men quite often at that time received comparable obituary honors, women rarely did. History, obituary and otherwise, has tended to be written in male terms.

Then there's the fact that Eliza's husband, Joseph Mitchell, although acknowledged (he was the father of her 13 children, after all), isn't mentioned by name.

Finally, considerable effort was made to characterize Eliza, so that she might be remembered for who she was --- other than the mother of a great many children.

The Mitchells were among Lucas County's earliest settlers, arriving in 1852 and settling on the former county home site (now home to Hy-Vee's frozen foods distribution complex) just northwest of Chariton. Joseph Mitchell, a veteran of the War of 1812, died less than 10 years later, on Nov. 14, 1861, age 67. Their son, James, had died two months earlier while in Union service during the Civil War; son David would die a year later, also in Union service.

Mrs. Eliza Frances Mitchell died at her residence, in Chariton, on the 28th day of November, in her 78th year.

"Grandmother" Mitchell, as she was familiarly called by her numerous friends, was one of the oldest and best known residents in Lucas county. For years she has been looked upon as one of the few remaining monuments, representative of that hardy and noble class of persons who first settled this part of Iowa, and bravely endured all the hardships and privations incident to a pioneer life in those days.

Her maiden name was Henderson. She was born, raised and married in Jessamine county, Kentucky, and was closely connected with some of the oldest and best families of that commonwealth --- notably the Prices, Crocketts and Gaines. She was married in 1826, and immediately with her husband went to Indiana and settled in the deep, dense and wild forests of Monroe county. There she and her husband cleared out a farm and accumulated an abundance and enjoyed it until 1852. In that year they sold the Indiana farm and moved to Lucas county, Iowa, where she has ever since lived.

When she came to Lucas county, all this part of Iowa was wild and new. Where we now have fine houses, barns, orchards, meadows, corn fields and pastures, then the wild deer grazed in herds undisturbed; and almost where our court house stands --- now old and dilapidated as it is --- the she wolf still suckled her young and made the night hideous with her howls. Then the wild monotony of Iowa in her virgin condition showed no signs of civilization, except here and there, at long intervals of distance, cold be seen the pioneer's cabin rising feebly above the tall surrounding prairie grass and weeds. Then the most enthusiastic optimists never dreamed of living to hear the locomotives whistle on Iowa prairie. But she and her husband wanted lands for their numerous children. Their means were not equal to such desires in Indiana, where civilization had rendered lands high. For the good of their children, they left their ease, comfort and competency in Indiana, and boldly faced the adversities, privations and terrors that surrounded the Iowa pioneer. None but brave souls would voluntarily and unnecessarily assume such conditions.

She was the mother of thirteen children. Three of them died in infancy, and one in early childhood, in Indiana, while all the others lived to reach manhood and womanhood and came with her to Iowa. Between 1858 and 1863, her husband and five of her grown children died --- two of her sons dying in the Union army. In 1874, her daughter Susan died. With the exception of David, they are all buried in the family lot in the Chariton cemetery. Her husband died in November, 1861, and although three of her children died later, yet, by her instructions, a place was left by his side for her grave, where she was laid away last Sunday by her kind and loving friends.

She met many serious reverses in fortune. The pre-eminent characteristic of her nature was patience. Under all her adversities, reverses, privations, afflictions and sorrows, she was never heard to complain, and never, in the least, became soured or unpleasant. Death had no terrors for her; she has for many long years been ready to die, and would sometimes express a desire to soon die, that she might meet on the other shore the numerous members of her family that had gone before. Yet she would always close her remarks with, "the Lord's will be done."

Her patience resulted from her deep and profound religious convictions. She had been a member of the Methodist Church from her girlhood. During all her life, her faith in Christ, in Heaven --- her faith in a future and eternal condition of happiness in Heaven, surrounded by her family and friends, was absolutely unwavering at all times and under all circumstances. She communed with Christ all the time. In her religion she was always quiet and profound --- never excited or given to display.

She was also a woman with remarkable strength of mind, and an inexhaustible supply of common sense. She had read very extensively on religion and politics, and on those subjects could talk fluently and with great sense and judgment. Her fondness for music was almost a passion, and whenever bowed down with sorrow and affliction, or suffering from pain and disease, nothing could give her such apparent relief as music.

She never had an enemy. Truly, "none knew her but loved her." In her presence no one could be rude, none could be wicked, and the most arrant infidelity could only stand and tremble, mute and silent. Her last words were: "Oh, Lord, what is thy will?" thereby showing how deeply she loved and studied the life and character of that one, who in his last agonizing hours, bowed down in prayer, said: "Thy will be done." Her personality became fixed in the minds of all who knew her, as the very highest example of female goodness.