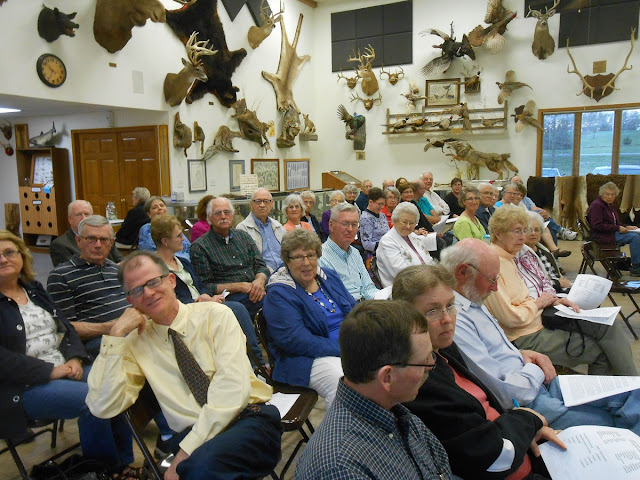 Thanks to everyone who attended --- and helped to organize --- last evening's annual meeting of the Lucas County Historical Society. This isn't the best of photos, but I nearly forgot to take anything at all.

The Lodge at Pin Oak Marsh is a great place to hold a meeting and the crew there had the main room ready for us, but there was a good deal of setting up and taking down to do in the dining room and elsewhere.

Pie and coffee ended the evening --- and that involved every board member showing up with a pie and volunteers to cut and serve it as well as make coffee. Others greeted guests and staffed the registration table.

I can manage the laptop and the projector myself, but we also bring along and set up the society's sound system --- and that would have been beyond me. More volunteers to thank

Everyone sat patiently through what turned out to be a long program, and I appreciated that. As Winifred Wilhite, now positioned on the far side of 90 years, said --- "I enjoyed the program but my butt hurts." Winifred remembered working in several of the buildings shown in vintage images of the square that were part of the program, including the west-side bakery, Montgomery Ward and others.

The membership affirmed the board's action, taken during its annual meeting last week, to add three terrific new members to to its ranks --- Ann Moon, John Hamilton and Ray Meyer; to return to the board two veterans, Steve Laing and Joe Sellers; and to re-elect the current officers, Frank Myers, president; Adam Bahr, vice-president; Lucinda Burkhalter, treasurer; and Steve, as treasurer.

We acknowledged the service of two board members who left us during the past year, Bill Marner, who died during August, and Ilene Church, who resigned last year because of health issues. In addition, Kay Brown and Ron Christensen decided not to accept new terms on the board, but still will be around as volunteers.