I've been reading, not writing ... 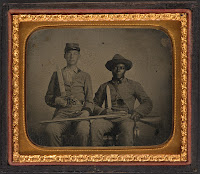 I usually arise sometime between 4 and 4:30 a.m. and start writing, but this morning started reading instead. And as a result, haven't time to write about anything other than what I read. (The goal here, generally, is to "publish" by 7 a.m.)

What caught my attention while browsing news sites first thing was a BuzzFeed article headlined "The Chandler Boys" by Adam Serwer about the lore (and myth) behind a tintype of a white man and a black man, both in Confederate uniform, that surfaced during 2010 in an episode of Antiques Roadshow (right click and open in a new window to enlarge).

It's fairly common knowledge that some slaves were forced to accompany white masters as servants into the Confederate military or to function as servants to various Confederate units. But this photo seemed to suggest that there might have been black Confederate soldiers, too.

This thought reinforces revisionist thought in the old Confederacy and elsewhere that the Civil War really wasn't about slavery at all --- and that some black men had been willing, even eager, to fight for the "lost cause."

The photo caused quite a bit of excitement among Confederate heritage groups, even resulted in a ceremony at the grave site, in the black cemetery at West Point, Mississippi, of Silas, the former slave, and the flowering there for a time of Confederate flags and other symbols.

In the years since the old tintype went public, it was purchased from the (white) Andrew Chandler family and donated to the Library of Congress. The Chandler families, black and white, pretty much have come to agree that the relationship between the two men was master and slave, even though it was personally amicable and continued after the war had ended, and that Silas was there to serve his master, not to fight for the Confederacy.

It's an interesting read, but a longish one --- so grab another cup of coffee and proceed.