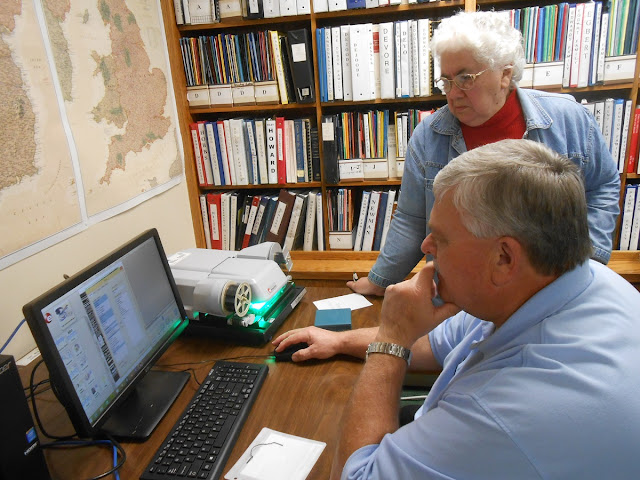 Although the timing is coincidental, the Lucas County Genealogical Society will introduce a brand new microfilm reader-printer to the public when it celebrates 40 years of achievement from 11:30 a.m. until 2:30 p.m. on Saturday, April 9. The event will be held in the family history room and elsewhere on the ground floor of the Chariton Free Public Library. Featured speakers will include John Pierce, among the society's founding members.

The new reader-printer was installed on Wednesday by Don Ruby, territory manager for the Microfilm & Imaging Division of Koch Brothers, Des Moines. Darlene Arnold, a principal researcher who also serves as LCGS treasurer and staffs the genealogical library three days a week, is looking on.

The need for a new reader-printer has been evident for some time as the old reader, in use for more than 20 years, began to fail. That device, the size of a major household appliance, could no longer be repaired because parts for it are no longer manufactured. It broke down entirely several weeks ago.

The society used its own funds and a matching grant from the South Central Iowa Community Foundation to pay for the new equipment, an investment of several thousand dollars.

The new reader-printer, about the size of a small suitcase, displays pages of microfilmed documents, scanning from rolls as it advances them, on a computer monitor. Individual stories or portions of pages then may be "clipped" and pasted into new documents which then are saved, shared and/or printed. Entire pages also may be saved. The monitor in place now will be replaced as soon as the society determines how much larger the new one should be.

The new reader, like the old, is intended for use by the public.

A reader-printer is vital to the work of the society because all of Lucas County's microfilmed records are maintained in its library. These include all known issues of Chariton and Russell newspapers as well as dozens of rolls of courthouse and other miscellaneous records.

While most of the newspaper microfilm has been digitalized and also is available in that format on the library server, a considerable number of issues are available only on microfilm. Darlene's index to vital records in Chariton newspapers dating back to 1867 makes finding the stories on microfilm or digitally a fairly simple task.

The genealogical library is staffed entirely by volunteers who try to keep it open during regular public library hours. When that's not possible, the general library staff will call in volunteers to open the library if asked to do so. 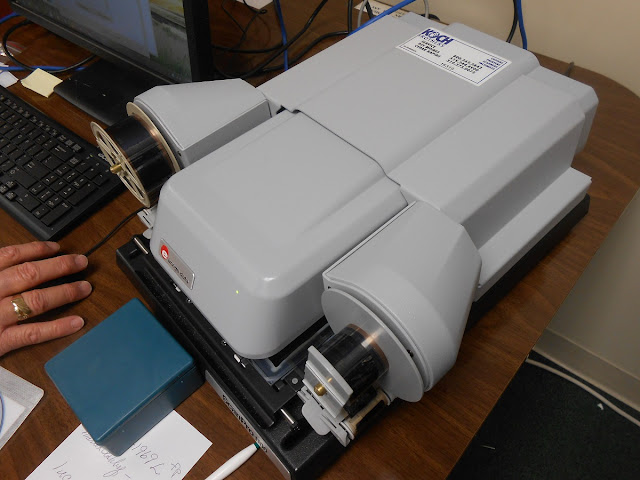 Great to hear about the new equipment as when I was visiting with Darlene she had mentioned that several of the items I sought were on film and not available due to the break down of the equipment. Another good reason for my return to Chariton.
norm