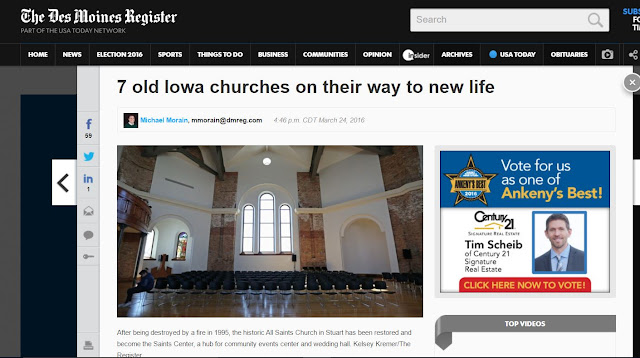 I'm a huge fan of Iowa's historic church buildings and have written now and then about those I think are Lucas County's best --- First Presbyterian, Sacred Heart and First United Methodist in Chariton, First Presbyterian in Lucas and First Baptist in Russell. Even about the county's currently most endangered --- Bethel Church out in Cedar Township.

So I was interested in a story in this morning's Des Moines Register headlined, "7 Iowa Churches on their way to a new life."  Go take a look, but keep in mind that the headline is misleading. "New life" for at least one of these fine old buildings seems likely to involve demolition. The churches covered --- most featured in several photographs --- are:

--- The former United Methodist Church in Bentonsport, one of my favorite places in the whole world. The building was converted into a home after it closed during the 1980s and continues to function as a bed and breakfast. Churches rarely work well as home conversions because the character of the interior space generally is lost, but in this case at least the exterior has been preserved.

--- The former Presbyterian church in Malvern, now an artist's studio, gallery and home sometimes called "the church of Zack."

--- Saints Center for Culture and the Arts, formerly All Saints Catholic Church, in Stuart. This is probably the most remarkable church restoration project in Iowa, although the more recent restoration of Burlington First United Methodist comes close. Both were gutted by fires set by arsonists. What remained after the 1995 fire in Stuart was rescued from bulldozers by preservationist (rather than religious) zealots and returned to life as a multi-use center for, as its name suggests, culture and the arts.

--- Loucks Grove Church in rural Adair County. This is a building that most likely will not survive. Its rural location and state of dilapidation are working against it.

--- Palmyra Methodist Church. I've taken a somewhat round-about way into Des Moines several times just to drive by this pristine prairie beauty northeast of Indianola. Restored once, it's fallen upon hard times again --- but there is hope here.

--- Mars Hill Church. I've written about this rather primitive log church southeast of Ottumwa, rebuilt after a 2006 fire --- set, too, by arsonists.

When I was a pup, or at least more of a pup than now, Trinity was one of the first Iowa congregations to open its doors to LGBTQ people and provided worship space to Des Moines' Metropolitan Community Church congregation --- at a time when most Christians had such an aversion to gay people that we needed a separate church of our own.