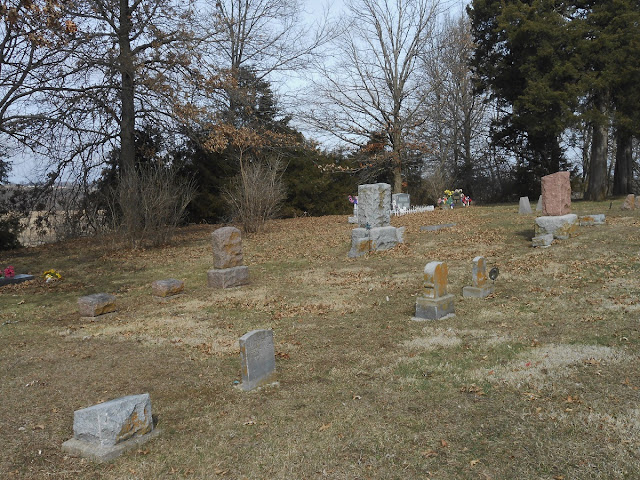 Tombstones serve as bookmarks, among other purposes --- reference points for the stories that form the narrative of a community's history. More than 10,000 of these stories have ended in the Chariton Cemetery since 1863 and are waiting to be read.

This gets complicated, however, when there are gaps in the tombstone record, as is the case here in the far west end of the original cemetery, just short of the point where land drops away into the Chariton River valley beyond.

The open space flanked by modest stones on the East half of Lot No. 9, Block 48, Old Division, is the final unmarked resting place of Ben Brock, a pioneer Iowa stage coach driver, and his wife, Margaret. But you'd never know that. Ben and Margaret, who outlived their resources and their abilities to care for each other, died respectively during 1919 and 1923 at the County Farm, just northwest of town. Their three surviving children purchased grave sites for them, but stones never were erected. And so, they have been forgotten.

Ben, whose given name was Benton A. Brock, was the eldest child of Alexander Brock and his first wife, whose name has been lost. He was born March 15, 1835, in Pennsylvania, but came west with his parents to Pekin in Tazewell County, Illinois, as an infant. His three siblings, Minerva, Floyd and Orson, were born there prior to their mother's death, ca. 1843.

Alex Brock remarried promptly --- on Aug. 11, 1845, to Mary Parson --- and they went on to have at least nine more children. Although there is no sign of animosity between the two Brock families, there were more children than resources and young Ben was squeezed out of the nest at age 16.

He found work ca. 1851, perhaps in Stark County, Illinois, where the family had resettled, as a stage coach driver, a profession he followed for the next 14 or 15 years.

This was not a job for old men, nor did it offer much in the line of security --- but it was an adventure and skilled drivers were paid well. As the railroad network spread across Illinois, stage coach lines were going out of business, however, and the drivers and their vehicles were being pushed west into Iowa at the time Ben first climbed to the high box and began cracking a whip.

Stage drivers had to be highly skilled since the safety of their passengers depended upon them. A veteran driver like Ben tended to be very highly skilled indeed. He was handling hitches of four or six horses, depending upon the size of the coach and the route.

Generally, the driver held the reins in his left hand while controlling the slack and cracking the whip with his right. When turning with a six-horse hitch --- at high speed much of the time --- the lead team had to be coordinated with the middle, or swing, team, and the "wheelers," hitched to the tongue. Top speed was 8-9 miles an hour.

Drivers were, as a rule, talented and intelligent, idolized by little boys in towns along their routes; popular story-tellers in the hospitality venues of the towns where they stopped to rest.

Many years after his glory days, Ben --- now a resident of Chariton --- sat down and reminisced a little with Henry Gittinger, editor of The Chariton Leader, who published the following in his edition of Sept. 17, 1908:

"Uncle Ben Brock, who was one of the pioneer stage drivers of this part of Iowa, can give some interesting experiences during his fourteen or fifteen years in the service. A few days since, he became reminiscent to the Leader and again went back to the days when he drew the reins over the four-horse team of prancing steeds, cracked his whip and started over the route.

"Uncle Ben is a native of Pennsylvania, but followed his avocation (sic) in Illinois before coming to Iowa. Modern transportation methods made staging unprofitable and so like the course of empire, was gradually crowded to the west.

"He tells of meeting a train of one hundred stage coaches and drivers coming to Iowa --- and then caught the inspiration. He principally drove between Ottumwa and Des Moines, but the building of the Des Moines Valley railroad drove him out of business. This was an evolution but he concluded to go no further west, so retired from the strenuous life.

"The exposure at times was intense, mounted high up on the box in all kinds of weather --- night and day --- through blizzards, rain and mud. He also says he never held any ill feelings toward the railroads for their part in his retirement ....

"One would hardly believe that stage drivers were superstitious, leaving that to the navigators of the sea, but Uncle Ben says the dry land navigators held to their superstitions, too. There were "hoo-do" stage coaches as well as "hoo-do" ships. One coach he remembers that all refused to drive. It had met with numerous accidents and to his knowledge three people had been killed in its "upsets," and the record was that six fatalities were due to its ill-fated antics.

"The old-fashioned stage coach is now almost a thing of the past even in the remote parts of the west and the old fashioned stage driver has almost dropped from view, but what few of him are left are nearing the sunset slope and dwell largely in romance and literature of the border days."

While headquartered in Pella, Ben met and on 19 November 1860 married Margaret Hendrickson. He continued to drive until after the Civil War, but by that time Iowa's rapidly expanding rail network was pushing coaches and their drivers into the Plains states and beyond. By 1870, much of Iowa was accessible by rail and the Western Stage Co. went out of business, selling its coaches to other companies farther west.

By that time, Ben had been "retired" for about five years --- but never quite managed after that to find a line of work that would secure the future for himself and his family. The Brocks had six children, but three of their sons died young. The survivors were Charlotte, Alpha Mae and Grover.

When the 1870 federal census was taken, the Brocks were farming in Lucas County's Otter Creek Township, where some of Margaret's family had settled. By 1880, they had moved on to Garden Grove in Decatur County, where Ben's younger brother, Floyd, also was living. Ben's occupation was listed as "day laborer."

At some point during the 1890s, the Ben and Margaret settled down in Chariton. They apparently operated a small hotel for a time, then Ben found other jobs --- finally as a janitor. They joined what now is First Christian Church and became mainstays of the congregation.

Both Ben and Margaret were sturdy people who, living into their 80s, outlived their abilities to care for each other and to provide for themselves. By this time, daughter Charlotte was living in California, son Grover was living in Davenport and only Mae, who had married William A. Knotts, was living in Chariton.

Henry Gittinger published the following little tribute to Ben on the front page of The Leader on October 23, 1919:

" 'Uncle' Ben Brock, for many years a well known citizen in Chariton, was called in death at an advanced age. He had the distinction of being one of the sturdy stage drivers who braved the hardships of the early days and made regular trips for years across the state (until) the tide swung westward. In those days Eddyville was the commercial center and mart for all this territory. Stage driving at that time represented a life of danger and heroism, yet those who engaged in it never flinched the winter's storm or summer's sun, but adhered strictly to their duties. Few of them yet remain, and if any class is entitled to a monument commemorative it is that of the pioneer stage drivers. In those days, old Lagrange was one of the stations on the route leading through Chariton to the Golden West. "Uncle" Ben represented the vocation of a past age, but his journey has ended. The life of a kindly old man has gone out."