The dubious distinction of being Number 1 This is the tombstone of Julia Maud Fawcett, infant daughter of DeWitt Clinton and Orrene Fawcett, who has the distinction of being Number 1 in the numerical sequence of more than 13,000 people interred in the Chariton Cemetery.

Gaylord Lyman, the Lucas County sheriff shot and killed by horse thief Hiram Wilson (who was lynched for his trouble and buried in old Douglass Cemetery) on July 6, 1870, is Number 2. He's buried in Lot No. 3, Block 1 --- Lot No. 2 was unoccupied at the time.

We're not sure what sort of cemetery records existed prior to 1900, when cemetery owner Dr. James Eddington Stanton, his assistant Emma Anderson and others began work on the current records. Legend has it that some of the early records had been destroyed in a fire, but there's no proof of that.

We only know that the first step in creating the new records, featured in a Chariton Herald story of Jan. 30, 1902, was to write down the names, burial locations and some information about everyone who had been buried there, commencing with Lot No. 1, Block No. 1, and working in sequence around the plat thereafter, numbering in order of location.

The fact that there are many numbered blanks in the record and information is sketchy about many others suggests that a lot of the work was based on observation and the reading of tombstones rather than written records. In some instances, there were graves with no stones and the record-compilers had no idea who the occupants were.

Once the initial survey was complete and everyone already there had been assigned a number based upon location, the record-keepers began to enter newcomers in strict numerical sequence, based upon date of burial, a practice that continues. Should this be your final resting place, you'll be assigned a number, too, one of these days.

The inscription on Julia's little tombstone reads, "Infant Dau. of D.C. and Orine Fawcett, Aug. 30, 1881." There is no official record of her death, nor was it mentioned in newspaper articles. So we don't know her precise age or the circumstances. In fact, her given name is found only in the cemetery record. It's possible that she was stillborn. 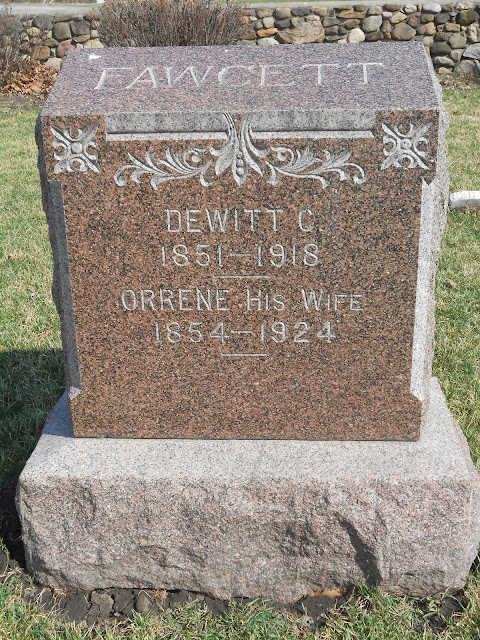 We know considerably more about her parents, who joined her in Lot No. 1, Block No. 1, as the years passed. Her father, DeWitt Clinton Fawcett, was born April 30, 1851, in Belmont County, Ohio, and came to Chariton via Chicago in 1875 where he engaged in a variety of mercantile ventures until settling down as a painter and decorator. Known to most as "Clint," he married Orrene Goodrich on on Nov. 24, 1880, and they had three daughters, including Julia. The others were Laura McNeer (1883-1975), also buried on the family lot, and Goldie Edmondson. Clint died of cancer July 31, 1918, and was buried by Julia's side. Orrene died at age 70 during 1924 and joined her family here.

The great Chicago fire of Oct. 8-10, 1871, was a part of DeWitt's story --- and that chapter of his life is recorded in both his obituary and elsewhere in Chariton newspapers.

He shared a little of that story in his own words, published in The Chariton Leader of June 27, 1912: "Before I came to Chariton I resided ten years in Chicago. I came there from my native home in Ohio. I was employed with the Babcock Manufacturing Co. I was there during the great Chicago fire in the fall of 1871. That is a matter of history now, but I vividly remember the many incidents as they occurred and should I describe the awful scenes you could scarcely realize them. I never want to see anything like it again. Death and destruction was everywhere. An area of more than ten square miles was burned over; human beings perished everywhere. What gruesome sights met the eye on every hand. The heat was so intense that it was hard to get away at a safe distance. I remember that thousands of people took refuge in the waters of the lake, then the oil tanks bursted and the oil spread out upon the water. Here hundreds perished. Some undertook to escape in barges and boats which later took fire and struggling humanity was defeated in the race for life."