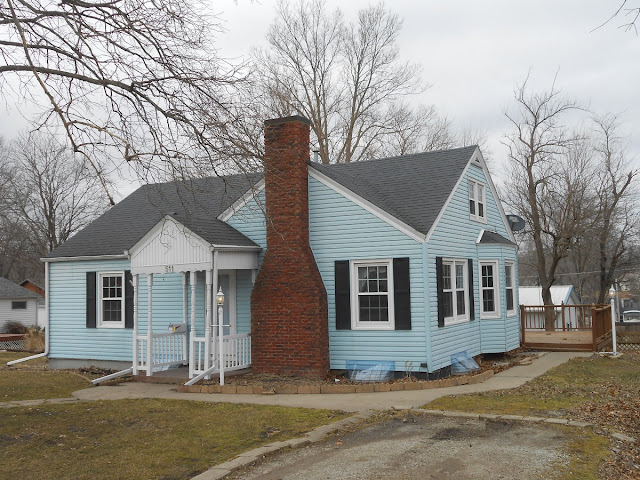 Many Chariton homes have both personalities --- and interesting stories behind them. This well-maintained but modest structure at 511 East Orchard Avenue, now on the market via Chariton Iowa Realty, is no exception.

Built during 1940, this was Chariton's first "model home," opening round in Kenneth E. Threlkeld's effort to jump start the city's sluggish --- for practical purposes non-existent --- new housing market. It also was home for some years to Threlkeld, his wife, Lucylle, and their daughter, Mary Ann.

"An example of what can be accomplished in low-cost home ownership will be shown to the public when Chariton's first model home will be opened for inspection next Sunday, July 14," The Chariton Leader announced in a prominent front-page story in its edition of July 9, 1940.

To understand what was going on here, it's useful to know more about both Threlkeld and the impact of the Great Depression on the housing market nationwide.

He was born during 1909 on the Threlkeld family farm east of Chariton and after graduating from Chariton High School and Chariton Junior College when on to study at the University of Nebraska, where he met and married Lucylle Winkler, a Kansas girl, in 1930.

Back home in Chariton, he founded during 1936 the Kenneth Threlkeld Insurance Agency and, two years later, the Central Savings & Loan Association, authorized to serve residents of eight south central Iowa counties. Prior to his untimely death at age 61 during 1970, Threlkeld had built the latter into a multi-million-dollar enterprise.

Savings and Loan associations were springing up rapidly during the 1930s to take advantage of low-cost funding for mortgage lending available through the Federal Home Loan Bank, established in 1932 to shift the mortgage business from insurance companies to banks and to encourage home ownership in a devastated economy. The Federal Housing Administration (FHA) came along in 1934 to underwrite and insure loans for new home building.

While lenders in other communities were taking advantage of these new funding sources, that apparently was not the case in Chariton where few new houses were being built. The Chariton newspapers scolded about this lag as the decade ended and Threlkeld seems to have been among the first to act.

He commissioned this home, intentionally modest but incorporating all the latest amenities, to whet the appetite for new housing and to show what could be accomplished.

Dean Ferguson was the contractor, Central Savings & Loan sponsored the open house and various other Chariton businesses furnished and decorated the interior. It opened to the public on Sunday, July 14, and remained open from 9 a.m. to 9 p.m. through Sunday, July 21. More than 3,500 Lucas Countyans trooped through, according to newspaper reports.

After that, the Threlkelds moved in with their own belongings.

The house was described as being "of the early American type" and featured six rooms (including bath), a detached one-car garage and a basement, where the forced-air furnace and laundry were located. The area under the roof was unfinished, but there was sufficient head room there for additional small bedrooms if a later owner cared to create them.

Here's part of the description, as published in The Leader on July 9:

The kitchen is 8x15 with a built-in unit on one side giving working space, cupboards, etc., and with space for the refrigerator and stove. The sink and drain board joins with windows above the sink. In one end of the kitchen is space for a breakfast nook.

The large bay window (is a feature of) the dining room, which measures 8 1/2 by 10 1/2 feet. One side is made up of a Welsh cupboard while the finishing is distinctive. Finished in knotty pine stained white the knots were rubbed out to natural color and waxed. The ceiling is grooved wood painted a bright pale blue and a scalloped molding completes the effect.

The fireplace dominates the living room which is 12x20 feet. A 6-foot arch connects with the dining room and two walls are finished in knotty pine. A large double window and built-in bookcases complete the picture. The fireplace and mantel are 6 feet wide.

In the west end of the living room, which faces the south, is a small arch with a back panel of knotty pine. The arch leads into a hall which contains a built-in broom closet with storage space above, a linen closet and a clothes chute.

A new type of synthetic tile was used to cover the lower half of the walls in the bathroom. A full recessed tub with shower and lavatory and toilet to match make up the plumbing equipment. In one corner is a powder nook. This room is 6x8 feet.

The north bedroom measures 11x12 feet. The walls are papered in this room and the closet is papered in cedar paper. The south bedroom is slightly larger, measuring 11x15 feet and the closet is 2 feet 6 inches by 5 feet, also slightly larger than the one in the north room; it also is papered and cedar paper is used in the closet which has a small window. The ceiling in the south room is of grooved wood (with) scalloped molding similar to that used in the dining room.

The entire house is cross ventilated with large windows on two sides in each of the larger rooms.

When you visit the home be sure to note the light fixtures and the hardware. It all harmonizes with the period of the home, early American. The entire house is insulated, both the sidewalls and the ceiling. Windows are of a new design and further enhance the colonial spirit. They are completely weatherstripped and work on a spiral operating inside a tube which eliminates any type of stop, etc.

Interior decoration is light and airy. Colors used in the papers and paints all blend as the visitor proceeds from one room to the next and yet there is contrast and surprise in each room because no two are finished in the same manner, making the home thoroughly "livable" and very unique in design and arrangement.

The Threlkelds lived in this home into the 1950s, but were living elsewhere when they began to divide their time between Monterey, California, and Chariton, maintaining homes in both places. Their final home in Chariton was sold during the spring of 1970 and Kenneth Threlkeld died of a heart attack on May 17 of that year in Monterey. Lucylle Threlkeld died in Monterey during June of 2001. Both are buried in the Chariton Cemetery.

Their 1940 home seems to have held up well, although the single garage has been taken down and a large new garage that opens on the alley to the north constructed. A substantial deck also has been added to the rear of the home.

If you're curious about what the interior looks like today, there are a few small photos here, at the Chariton Iowa Realty listing. 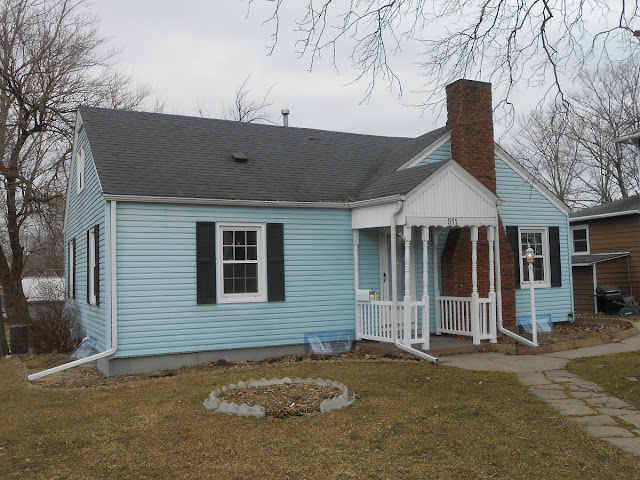