Buddy, can ya spare five bucks? 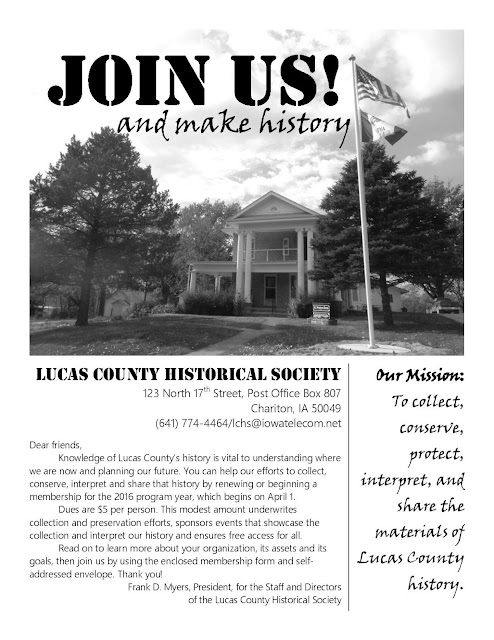 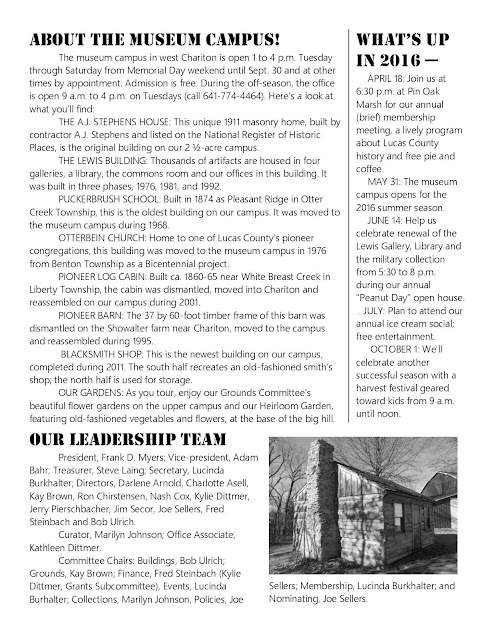 This is the Lucas County Historical Society membership letter that went out last week, just in case you missed it. Our membership year runs from April 1 (with the annual meeting on April 18 this year) through March 31 and this is the opening round of the 2016-17 membership campaign.

Dues remain at $5 per person per year, which doesn't seem like much --- but every little bit helps pay the bills and, we think, is a good investment in the effort to conserve, collect, interpret and present Lucas County's history.

If you didn't receive a letter, feel free to write a check payable to Lucas County Historical Society and mail it to P.O. Box 807, Chariton, IA 50049. If you received a letter, a return envelope was enclosed.

And even if you can't spare 5 bucks, please take a look at the letter to learn more about the society, its campus and some of our activities.

Speaking of the historical society, we're set to begin painting today in the Lewis Gallery and the Library, which fill the top floor of the 1976 wing of the Lewis Building (this building was built in three stages and contains four galleries on two levels, the library, the commons room, restrooms and office).

These two areas are being redecorated and realigned with a major boost from a Vredenburg Foundation grant. All the walls will get fresh coats of paint, a picture rail will be installed around the tops of both rooms and the original 1976 carpet --- a dark red and black figured design that must have seemed like a good idea at the time --- replaced with something far lighter and of an industrial grade.

It's a huge undertaking --- try moving a jam-packed museum sometime and let me know how it goes. With the exception of a few larger pieces that will have to be moved around as carpet goes down, everything already has been removed to the commons room or elsewhere by volunteers and is stacked to the ceiling.

So the great painting project will begin today. Once that's done, the old carpet will come out and the new carpet will go in, then the museum displays will be reinstalled --- hopefully by May 1.

There will be some realignment, especially in the military section where four new display cases will be installed, again thanks to the Vredenburg Foundation. One of these cases has arrived, but the other three will not be coming in until May just because we have no place to put them until the Lewis Gallery is ready for use again.

As if that weren't enough, we're deep-cleaning the public areas of the 1911 Stephens House, too --- thanks to Kathleen and Karoline; and Marilyn and her crew continue to work at the seemingly endless task of pairing thousands and thousands of entries in our computer-based cataloging system with images of the artifacts.

Ordinarily we like to say you're always welcome at the museum, but this probably isn't the best time to plan an off-season visit. Unless you'd like to help. In that case, put on some old clothes and come on out!