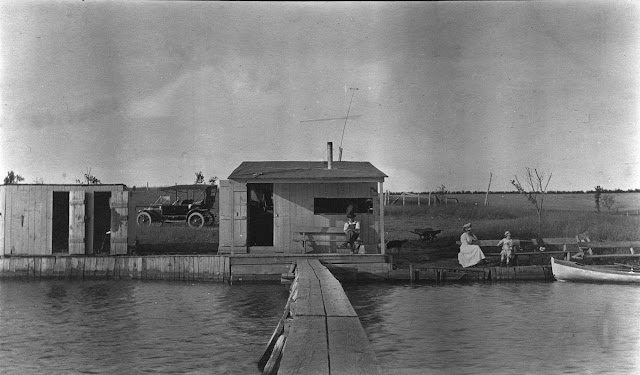 There was considerable excitement in Chariton during 1905 when after a frustrating 40-year wait for a reliable water supply, the C.B.&Q. Railroad took matters into its own hands, purchased land just west of town and built a big reservoir --- a mile and a half long, a quarter mile wide in some places, covering 85 acres and impounding an estimated 250,000 gallons of water.

It took the latest in excavating equipment and a crew averaging 45 men and 23 teams three months to build. Work commenced on August 25 and was completed on November 17. By the summer of 1906, Lucas County had its first lake --- the largest body of water for miles around. Most, at the time, called it the "Q Reservoir" or the "Railroad Lake." A pumping station along its shoreline propelled water to a tower in the C.B.&Q. railyards northwest of the square to supply steam-powered locomotives.

Today, although we sometimes call it Country Club Lake or West Lake, it's officially Crystal Lake, a name applied during March of 1910 by the Chariton Gun Club, by this time lease-holder for railroad property around the lake as well as the recreational rights to its water.

I wish I could date this photo taken along Crystal Lake's east shoreline more precisely, but can only guess at ca. 1915. Someone who can identify by year the magnificent automobile parked between the concession stand and changing cubicles might be able to do better. These buildings, along with the dock and benches, were among the Gun Club's early improvements to the property.

Today, Lakeview Golf & Country Club --- current owners of the lake and the land surrounding it --- occupies the area south and west of the lake. Houses, many of them quite grand, sit on leased ground along both the northwest and eastern shoreline.

The Q Reservoir, as soon as it filled, became a destination for nearly everyone, depending upon season --- swimmers, boaters, anglers after a year or two, hunters in the fall, even preachers scouting for a site to baptize converts by immersion. But this free-for-all was short-lived.

During 1908, the railroad leased the entire property (other than water and ice rights) for $300 annually to a neighboring farmer, E.E. Carroll, for grazing and hay. He announced promptly that trespassers would be prosecuted, locked the gates on access roads and published menacing notices in the Chariton newspapers.

There was a good deal of consternation about this and several groups in Chariton began to develop strategies that would allow controlled public access. During September of 1908, some 25 men organized the Chariton Gun Club and leased for $150 from Carroll recreational rights to lake waters and four rods (66 feet) of shoreline all the way around it as well as four acres where improvements were planned.

The men enjoyed hunting at the lake that fall and, in the spring, "bath houses" were built --- but this was not a match made in heaven. Part of the agreement with Carroll was that his cattle would not be allowed to stand in or drink from the lake or to graze on shoreline leased by the club. No one had told the cattle this --- and the shoreline was not fenced. One thing led to another and Carroll locked the gates, claiming that the Gun Club's lease did not necessarily include access rights.

During August of 1908, the Gun Club took Mr. Carroll to court and obtained an injunction against his errant cattle, ordering them not to roam on land leased to the club or stand in or drink from the lake. The judge also ordered Carroll to allow Gun Club members access via two lanes and to work out ways to divide club and grazing lands with fences.

This uneasy arrangement continued until 1910, when the Carroll lease expired and the Gun Club leased the lake and its surrounding land directly from the railroad. The Chariton Herald was able to report in its issue of March 17, 1910, that: "The Gun Club is getting ready for the season at the railroad lake west of town, and the lake has been formally christened 'Crystal Lake.' the fish in the lake will be of good size this year, and much enjoyment is also expected from the bathing and boating, after the season arrives for those sports."

"obtained an injunction against his errant cattle, ordering them not to roam on land leased to the club or stand in or drink from the lake." Funny.... Great article