Caucus time in Iowa --- a century ago 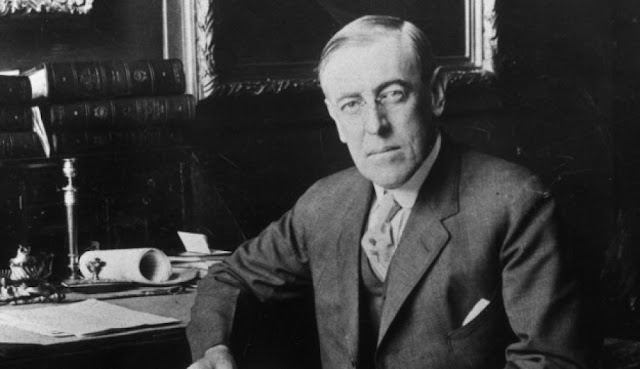 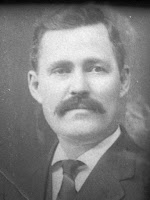 I got to wondering Tuesday --- as post-caucus silence settled in across Iowa and candidates, their staffers and the big-time media vamoosed --- what the first day of February a century ago had been like politically here in the Hawkeye state.

Curiously enough, President Woodrow Wilson paid the state a visit that day, Feb. 1, 1916 (a Tuesday) --- speaking before a packed house in Des Moines during his first appearance in Iowa --- yes, first --- since his election during November of 1912.

About 25 folks from Chariton made their way to Des Moines on that bitterly cold morning to see and hear him, including Herald-Patriot editor and publisher W.D. Junkin (left), but were treated badly at the appearance venue --- the Des Moines Coliseum, a vast and ugly building that had opened during 1908 just north of the public library (now the World Food Prize Hall of Laureates) along the riverfront downtown. So badly, in fact, that Junkin devoted the early paragraphs of his report to complaining about the affront rather than discussing what the president said.

Republicans had handed the presidency to Wilson, a Democrat, during 1912 after getting into a nasty election-year fight that saw former president Theodore Roosevelt march off with the most liberal wing of the Grand Old Party to launch a third-party effort, the Progressives --- or Bull Moose contingent.

Wilson had achieved broad bipartisan popularity by 1916, presenting himself as the leader who kept the United States out of war --- World War I was raging across Europe that year and the Mexican Revolution was an ongoing issue south of the border.

Although it generally was assumed that Wilson would seek another term, he had not announced by February --- so far in advance of the general election. Nor had Republicans selected a candidate to oppose him (they would settle during June on Charles Evans Hughes, then an associate justice of the U.S. Supreme Court and a moderate who, it was hoped, could reunite the badly fractured party).

Another major difference on the political scene in 1916 was the fact that Iowa women couldn't vote in any election for public office --- let alone run. The Iowa Legislature some years earlier had granted women of the state the right to vote in elections that didn't involve candidates --- for bond issues, public works projects and the like.

But those flighty females just weren't up to helping decide who would actually run the state and the federal government, or so a majority of the good old boys in the Iowa Legislature felt.

Women did have the vote in 12 states by 1916, including Iowa neighbors Kansas and Illinois, but most of the other universal suffrage states were in the West --- Washington, California, Wyoming (the first to grant universal suffrage, in 1869), Utah, Colorado, Idaho, Arizona, Nevada, Montana and Alaska Territory.

Theodore Roosevelt and his Progressives had aggravated moderates and conservatives in both parties during 1912 by calling for a constitutional amendment imposing universal suffrage on the nation and the suffrage movement was gaining momentum. But later on during 1916, the best both Democrats and Republicans could do in their platforms was to endorse universal suffrage but insist that it was a matter best left up to individual states.

So if he wasn't campaigning for re-election in Des Moines on Feb. 1, 1916, what was Wilson up to?

Well, he was trying to work his administration out of the corner it had backed itself into during the early years of his term by dismissing as unnecessary calls to shore up the rag-tag U.S. military --- just in case.

It had become increasingly clear to thoughtful people of all political persuasions that some form of U.S. intervention would be necessary to end the deadly war in Europe and protect U.S. interests. So Wilson now found himself trying to build a solid middle ground between the interventionism of Theodore Roosevelt and his progressives and the peace-at-any-price philosophy of Nebraska populist and pacifist William Jennings Bryan, still widely popular --- although a consistent loser as a presidential candidate --- among Democrats.

Wilson would go on to win the 1916 election as a peace candidate, but he was setting the stage for the turn-about that would result in the U.S. declaration of war against Germany that occurred during April of 1917 after German naval forces resumed unrestricted warfare in war-zone waters and  accelerated attacks on U.S. ships at sea.

Will Junkin finally did get to the meat of President Wilson's speech in his Herald-Patriot report of Feb. 3, 1916 --- but his account of how Lucas Countyans were treated in Des Moines on Feb. 1 is more entertaining:

"Perhaps twenty-five Lucas county citizens journeyed to Des Moines Tuesday to see and hear President Wilson in his first visit to Iowa. Of the number who went from here about one-half were able to gain admission to the big Coliseum building, Des Moines people being slipped into the north entrance of the hall in large numbers, while the unfortunates who came scores of miles from the outlying disticts were compelled to see Des Moines citizens cared for by the thousands.

"Arrangements for handling the crowd was a big task, too big for the experience of those in charge, apparently. At an early hour thousands of men and women stood at the south, or main entrance of the Coliseum in zero weather waiting for the doors to open, while other thousands who had received the tip were entering at the north doors. The Coliseum cares for 8,000 people and the room was completely filled when the president and his party entered about eight o'clock.

Junkin then goes on to summarize Wilson's points for Lucas County readers, but concludes:

"The cause he advocates is much stronger in Iowa for his coming, but it is to be regretted that he could not be heard by all who visited Des Moines."