How about some Shrove Tuesday pancakes? 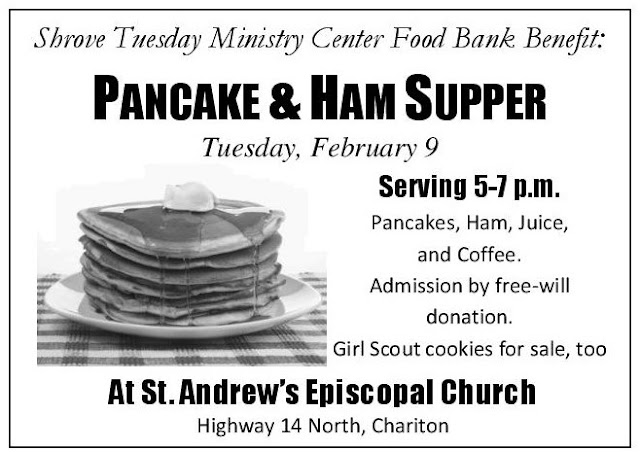 Somehow, while preoccupied with the Iowa Caucuses and moving a mountain of artifacts from one place to another at the museum, January vanished. Now, Ash Wednesday --- the beginning of Lent --- is almost upon us.

If you're in the market for an Easter bonnet, you'll need to get your shopping done by Sunday, March 27 --- early this year. Forty-six days before Easter, Ash Wednesday (Lent is a 40-day season, but Sundays don't count). And one day before Ash Wednesday, Shrove Tuesday --- Pancakes!

At St. Andrew's Church, we'll be serving our annual benefit pancake supper from 5 to 7 p.m. on Tuesday, Feb. 9, in the parish hall. Admission is by free-will donation and all proceeds will go the Lucas County Ministerial Association's Food Bank. Our Girl Scout troop will be doing the serving while we cook --- and they'll have Girl Scout Cookies for sale, too. So it's kind of a two-in-one benefit. All are welcome.

The tradition of serving pancakes on Shrove Tuesday seems to be English --- Shrove Tuesday is known as Pancake Day in England. Since Episcopal churches are Anglican, many of us serve up pancakes over here, too.

Lent, in the traditional church, is a season of penance and fasting --- far more austere in the early days than now. And in order to prepare for the Lenten fast, the observant --- rather than waste food --- developed the practice of feasting on the Tuesday before Ash Wednesday in order to consume as much as possible of foods that would be restricted during Lent, including fat, milk and eggs, components of pancakes.

Shrove Tuesday, of course, also is known as Mardi Gras --- which translates as Fat Tuesday. The carnival atmosphere now associated with Mardi Gras came along later.

Whatever the case, join us and do a little feasting for a good cause on Tuesday.