I love a good story, and heaven knows Charley Rose and his chums generated good ones when they set out from Chariton in February, 1898, to seek their fortunes in the Klondike gold fields --- and found disaster instead. For the details, see "The Klondike, gold fever, foolhardiness and disaster," "John Bentley's homecoming," "Starling W. Riggins' bad luck" and finally, "Charley Rose comes home."

But there's another story to tell, involving Charley's grandson, Edward Cyril Rose --- also known as Monte King. I'm grateful to Pam Bullent of Great Yarmouth, Norfolk, who with her sister cracked the case after years of meticulous research. They've graciously given me permission to use some of their material, and I will do that --- eventually.

But first there's the background --- I love background, too. Others find it tedious, and I'm sorry. But it is my blog. So this is Part 1 of Edward's (or Monte's) story. 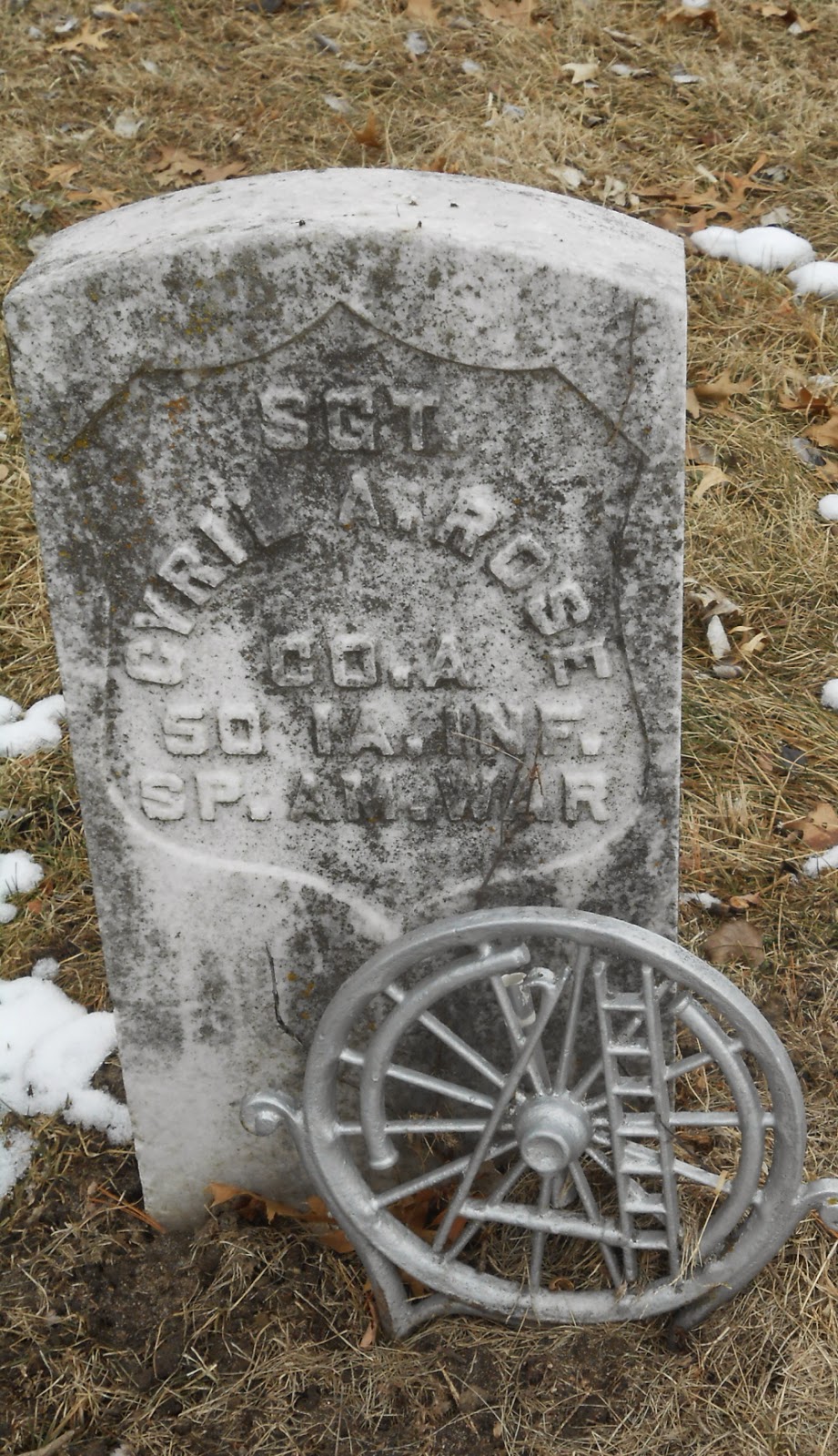 Those who read "Charley Rose Comes home" may recall that Charley dropped dead Nov. 16, 1917, on the platform of the C.B.&Q. depot in Albia at age 63, his health impaired by six-plus years in Yukon Territory.

His widow, Jennie, continued to live in the family home into the 1930s, when she became infirm. In 1932, their only son, Cyril Albert Rose, and his wife, Catherine, moved back to Chariton from Lewiston, Idaho, to care for her.

Bert and Catherine, also known as Kate, had two children --- Edward Cyril, reported to have been a resident of Lewiston at the time of his father's death; and Marcella, married to John "Jack" Sizelove, who came to Chariton from her home in Spokane, Washington, to attend the funeral.

Bert Rose had been born near Chariton on March 23, 1876, and grew up in town. He does not seem to have graduated from Chariton High School, but at that time there were a variety of private academies, too, and their records have not survived. So his education most likely was not neglected. He seems to have worked at a variety of occupations in his late teens and early 20s and like many young Chairton men of the day, enlisted in the Iowa National Guard when the headquarters of Co. H, 55th Infantry, were established in his hometown.

About two months after his father left for the Klondike during February of 1898, the Iowa National Guard was mobilized during late April in anticipation of Spanish American War service. Bert and other members of Company H were ordered on the 25th to report to the staging area in Des Moines --- the Iowa State Fair grounds --- and on May 1 were dispatched by train to Camp Cuba Libre in Jacksonville, Florida.

This less than glorious war then ended, however, and the Chariton boys were ordered home on Sept. 13, then discharged on Nov. 30. So everyone, other than a couple of unfortunate young men felled by typhoid, was home for Christmas that year. Bert's services is commemorated on his tombstone (above) in the Chariton Cemetery.

The next year, on the evening of Thursday, June 1, 1899, about 75 guests gathered in the parlor of the Charley and Jennie Rose home to witness the marriage of Bert to Miss Katherine (or Catherine) "Kate" Abigail Swett. He was 23 at the time and Kate was 24.

Kate Swett had not had the easiest of lives prior to her marriage to Bert. She was the third of four children born to Moses Albert and Matilda (Weaver) Swett in Lucas County --- most likely in what now would be called the Bethel Church neighborhood of Cedar Township. Her elder sisters were Harriet and Sarah. Kate arrived during August of 1874 and three years later, on June 11, 1877, little Porter George was born.

Matilda did not recover after the birth of Porter George, and died on June 20, age 33. Kate would have been in her third year at the time.

The children were split up after Matilda's death. Kate went to live with her grandmother, Harriet (Yergey) Weaver, in Cedar Township. Harriet's first husband, George Weaver --- Kate's grandfather --- had died during September of 1869. The widowed Harriet had just recently --- on Oct. 12, 1876 --- married the widowed Hugh Larimer.

Harriet, Sarah and the infant Porter George were taken in by their aunt and uncle, Elizabeth Jane (Swett) and Edward Ames Temple. Both Elizabeth and Edward were in their 40s at the time, but had no children of their own. Edward was among Chariton's most prominent citizens --- an honest and upright banker and devout Episcopalian who would go on to found the Bankers Life Association, now Principal Financial Group, headquartered in Des Moines.

Moses Albert Swett, usually known as Albert, seems to have had little to do with his children after this. When the 1880 census was taken, he was enumerated as a miner at Mineral City, San Juan County, Colorado. He's proved too elusive to track down during the next 20-plus years, but surfaces in 1910, age 69, living with his sister, Abby (Swett) Freeman, and nephew, Albert, on a farm in Columbia County, Oregon. He died there on Dec. 29, 1918, and was buried with the Freemans --- Abby; her husband, Charles; and their son, Albert, in Bayview (I.O.O.F.) Cemetery.

Tragedy struck the Temple family on April 30, 1880, when little Porter George died of scarlet fever at the age of 2 years and 10 months. On December 6, Elizabeth (Swett) Temple died unexpectedly of "rheumatism of the heart." 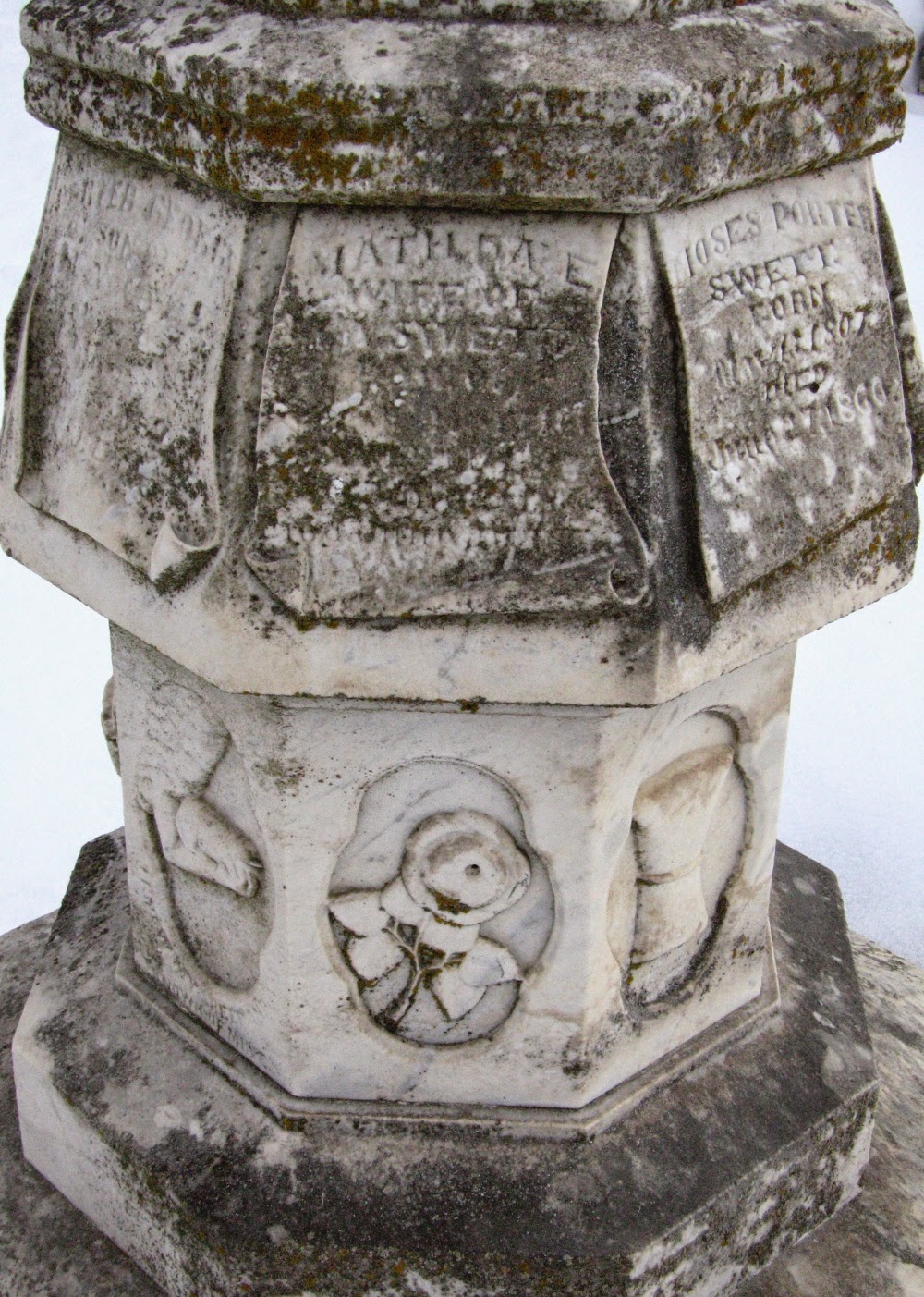 It was probably soon after Elizabeth's death that Edward gathered his Swett in-laws from wherever they had been buried previously and arranged them around a central cross in a unique pie-shaped arrangement in the Chariton Cemetery, shown at the top of this post  and at left --- His wife, Elizabeth; the little boy they had taken in, Porter George; Kate's and the boy's mother, Matilda (Weaver) Swett; and Elizabeth's parents (Kate's and the boy's grandparents), Moses Porter and Abby Jane (Tillman) Swett. The inscription for Matilda is at left.

Although excavation is frowned upon in the Chariton Cemetery, it is believed that each of the six souls buried around the tombstone was aligned with feet toward it so that on the great resurrection morn, all would spring from their graves facing the cross. Edward joined his family here in 1909.

Kate had remained in Cedar Township with her grandmother Weaver/Larimer during all of this, and continued to make her home there until about 1891, when she enrolled at Simpson College.

She seems to have been an extraordinarily independent young woman, most likely financed by large part by her uncle Edward A. Temple, who would remain extraordinarily generous to his late wife's extended family until his own death during 1909, then in the will probated thereafter.

The Chariton Democrat of Sept. 6, 1895, reported that Kate had opened a hair dressing parlor in Red Oak, but by December of 1896 she was headed to Chicago to attended a three-year training course for nurses. That lasted about a month, and then she returned to Chariton.

During May of 1898 she signed on as local reporter for The Chariton Herald --- and apparently had found her niche. She still was thus employed at the time of her marriage to Bert Rose.

If the wedding write-ups are to be believed, Bert and Kate planned to live with his mother in Chariton until his father, Charley, returned home from the Klondike. That, however, did not work out.

Their first child, named Edward Cyril Rose, was born most likely in Chariton on Feb. 2, 1900. But by June of 1900, when the federal census of Wayne County was taken, Bert, Kate and Edward were living near New York, his occupation given as farm laborer. They had returned to live in Chariton, however, when their second child, Marcella, was born on Jan. 10, 1902.

Like his father, Charley, Bert seems to have had trouble settling down. He had found work by 1903 with the C.B.&Q railroad, and during April of that year Kate and the two children left Chariton and moved to Alliance, Nebraska, where he was headquartered. By June, they had bought a restaurant in Alliance, too, and Kate was operating that.

When the 1910 federal census was taken, Bert, Kate and their two children were living on a ranch, which they owned, in Deer Creek Precinct, Nez Perce County, Idaho. Lewiston is the Nez Perce County seat. When her uncle, Edward Ames Temple, died during 1909, Kate received a $1,000 bequest --- not much now, but a considerable amount then. It may be that this bequest helped purchase Idaho land.

For a time during the period 1910-1920, Bert was employed by the federal government as a farm supervisor at the Nez Perce Agency, Fort Lapwai.

By 1920, however, the family was living on a rented ranch in Pondera County, Montana. And in 1930, with both Edward and Marcella now on their own, Bert and Kate were living in a rented house in Worley, Kootenai County, Idano, and his occupation was given as carpenter.

Son Edward turned 18 while the family was living in Montana --- and pay attention to this because it will come up again as his story continues. On Sept. 12, 1918, two months before World War I ended, Edward registered for the draft in Conrad, Montana. He gave his occupation as farm hand and his status as "not employed." According to his physical description, he was tall and slender with blue eyes and light hair.

Two years later, in 1920, he was living with his parents and sisters on their rented ranch in Pondera County; his occupation was given as "none."