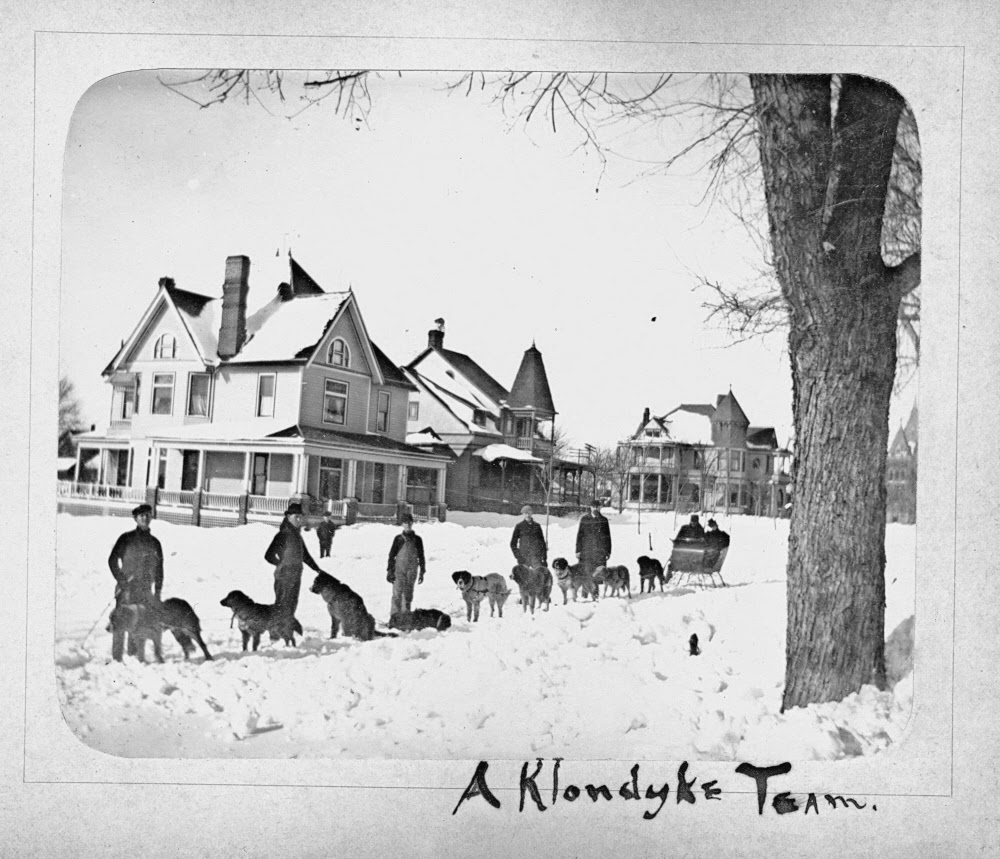 This is a tale of gold fever and foolhardiness, high adventure and death --- encapsulated as it was beginning in this photograph taken most likely during January of 1898 on South Main Street in Chariton. The photographer was standing in front of the big Gibbon-Copeland home, then almost new, and shooting to the northwest. In the far distance is the home of Frank and Minnie Crocker, now Fielding Funeral Home.

The small photo album in which this photo was found came to the Lucas County Historical Society a couple of years ago as a gift from Hubert and Mary Lou Pierschbacher. The album has an interesting provenance, but since I'm going to come back to it another time I won't go into it now.

None of the people in the photo are identified, but I'm willing to bet that the three in the foreground, outfitted for heavy duty winter travel, are (in no particular order) the three major characters in this drama --- Charles W. Rose, whose home was out of the picture to the right, northeast of the Crocker house; John Edwards Bentley, scion of one of Chariton's oldest and most respected families; and Starling B. Riggins, called "Starl," about whom relatively little is known.

All were married men, two with young children --- and all were old enough to know better. But gold fever was a powerful thing. It would cost two of the three their lives.

To understand what was going on, you need to know that gold was discovered in the Klondike region of the Yukon in northwestern Canada during the fall of 1896. Early the next year, news of the discovery reached Seattle and San Francsciso and spread like wildfire across the United States in newspapers and other periodicals of the day.

That set off a stampede of an estimated 100,000 prospectors --- or more --- who flooded into a primitive area of unimagined hardship in search of riches. The Klondike gold rush continued until 1899, when the precious metal was discovered near Nome, Alaska, and the stream shifted in that direction.

Lucas Countyans were not immune. The world passed through Chariton daily on the C.B.&Q. line. Special trains loaded with supplies and men bound for the Klondike were noted and reported upon. Some Chariton merchants were offering to outfit potential prospectors with the gear they would need --- for a price, of course.

Into this developing situation during late 1897 stepped several Chariton men, some anxious to seek their fortunes, others interested staking a prospecting expedition most likely in return for a cut of the proceeds. Webb Hultz, prosperous long-time traveling representative of the Tone Brothers Spice Co., seems to have been chief among them. Frank Crocker, always a chancer, was involved, too.

Those who volunteered to make the trip were men in their 30s and 40s, decidedly respectable, but for one reason or another at loose ends. C.W. Rose, age 43, was the oldest. Bentley was 35 and Riggins, 31. Rose was married to Jennie and had a grown son; John was married to Theodosia and had two teen-age daughters; and Riggins, married to Nellie, had two very young daughters.

Bentley seems to have taken the lead in organizing the expedition. Riggins' brother already was prospecting in the Yukon --- at El Dorado No. 2 --- so he had useful contacts. But the old man, Charley Rose, was hard-core --- really hard-core. He would be the rock and the reporter and would outlast them all.

The men equipped themselves in Chariton with some of what they would need, including all their clothing other than hiking boots. There were nine dogs, although they planned to take only the top six with them and would need to acquire three more elsewhere. The Chariton Democrat of Jan. 28, 1898, reported that "The gentlemen have been training them for a few weeks past and they have attracted a great deal of attention."

No doubt the photo above was taken during one of those training exericises. Sleds would not be built or bought until farther along, so a sleigh was substituted. Chariton harness-maker A.C. Reibel built the dogs' harness.

The departure date was set for Feb. 1, 1898, and a farewell party for the intrepid three was hosted by Webb and Ida Hultz at their grand home on South Main Street.

A farewell article was published in The Chariton Herald on Thursday, Feb. 3, two days after the men had embarked. Had the author known what was coming, he most likely would have chosen some of his words more carefully:

The much talked of expedition of the Chariton band of fortune hunters was launched last Tuesday, and we bade farewell to Chas. Rose, John Bentley and (Starl) Riggins forever. We never expect to speak to them again. When they return with all their wealth they will be so puffed up that they won't know any of their old friends who followed them to the depot to wish them a safe journey.

We base this opinion on our experience with human nature as it has come under our observation. As to whether the boys would prove exceptions to the rule, should they strike it rich, we don't know, but we wish them abundant success at any rate.

From Chariton they go direct to Seattle, where they will buy the remainder of their outfit, and from there they will proceed to Dyea (Alaska) by boat. Here they will procure sleds and face the most difficult part of their route, Chilkoot Pass, which to traverse one must travel 26 miles of the most arduous road known to man.

Having made the pass in safety they will have comparatively smooth traveling almost all the way, as Lake Linderman, a part of the head waters of the Yukon, is encountered at this point and its glassy surface will afford a convenient road bed by which they can go.

At Tagish, there is a government station where revenues are collected and here the boys will have to submit to the inevitable and pay the duty on their dogs and provisions.

Their outfit will be largely the same as we described some weeks ago. They will take only two dogs apiece from Chariton, as their tickets limit them to that number, and to express a single dog to Dyea would cost about $36.

Their provisions, which must of necessity be plain and substantial, are taken from here. Their clothing is made of the most durable and heat retaining substance to be had. They will wear a suit of silk underwear outside of which they will wear a suit of fleece lined flannel. Their coats and trousers will be reversible, one side being of leather and the other of corduroy. Footwear of every description will lend comfort to their chillblained members and countless other articles of utility will be stowed away in the odd corners of the packs. They will take 38 caliber Marlin repeating rifles, hunting knives and fishing tackle.

They expect the journey will occupy two months, a greater part of which time will be spent on the last 600 miles between Dyea and Dawson City.

With last Tuesday began an epoch in their lives that will probably be the most marked of any they ever have or ever will experience. A pilgrimage of 3,500 miles under the conditions that confront the prospective tourist to Alaska is in itself an undertaking that is calculated to make a man hesitate, and every day spent in that desert country adds so much to its immensity. That they may return sound in health and strength, and rich in experience and the pocket is the sincere wish of the Herald.

We'll pick this story up another day, after the three men and their dogs have reached Seattle. Stay tuned!