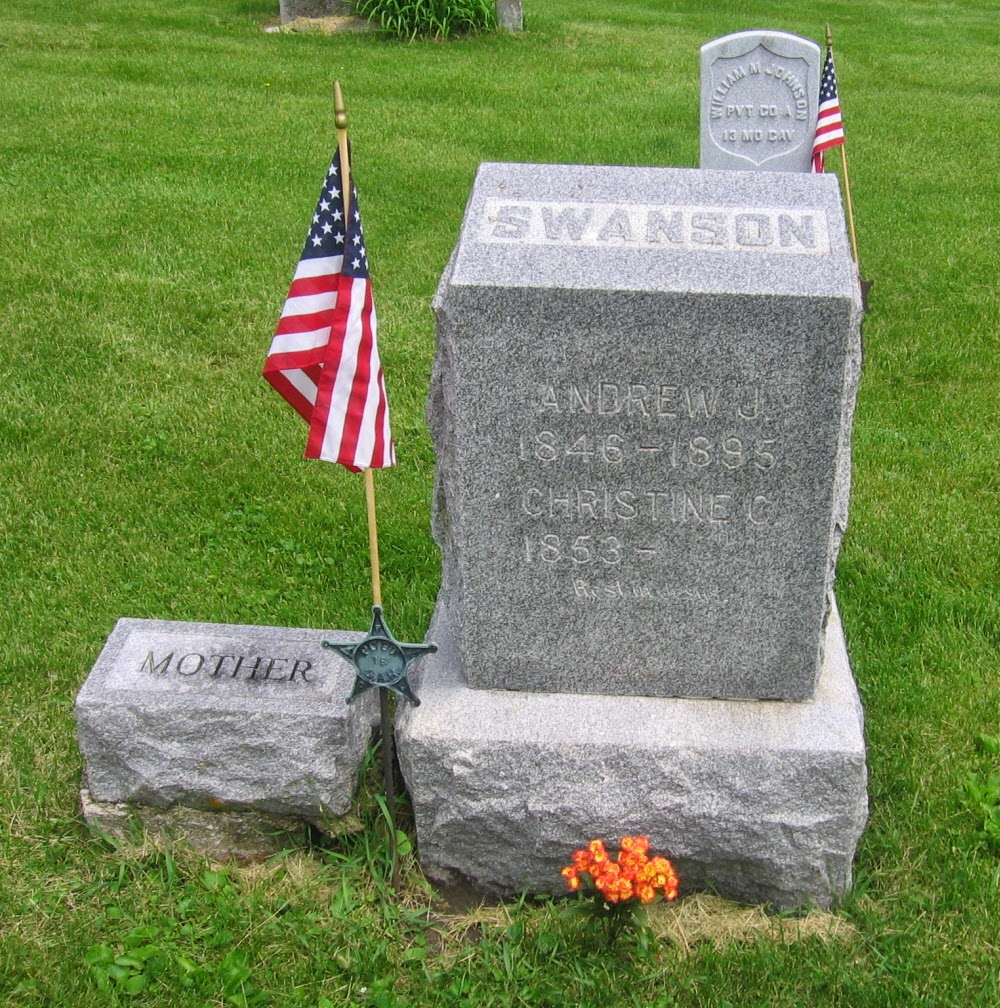 The Rev. Andrew J. Swanson, Whitebreast Township farmer and Swedish Mission Church preacher, arrived in Lucas County from his native Sweden during 1869, some years after Civil War guns had been silenced. So why in the world is there a Grand Army of the Republic flag holder, indicative of military service for the Union cause during the war between the states, at his grave?

The Grand Army of the Republic (G.A.R.) was a nationwide organization of Union veterans, represented in Chariton by the Iseminger Post, that ceased to be upon the death of the last veterans.

The difficulty was discovered this week when Steve Hanken, of Cedar Rapids, processed a photo of Andrew's tombstone that he'd taken last Memorial Day, but couldn't connect him with a Civil War service record. Steve and Sharon had driven down from Cedar Rapids and photographed all the tombstones in the Chariton Cemetery at which G.A.R. markers, then bearing flags, were located. These are being added to a national database of Union veteran gravesites maintained by the national Sons of Union Veterans organization.

I volunteered to see if I could find out what was going on here and with assistance from Darlene Arnold at the Lucas County Genealogical Society library we found an obituary for Andrew that did not mention Civil War service but did confirm what other documents there stated, too --- that he'd arrived too late for that war.

That florid piece of prose, published in The Chariton Herald of Jan. 31, 1895, is such a wonderful thing that I'm going to transcribe in here. If someone ever says to you, "They don't write obituaries like they used to," you can now say, "It may be just as well."

Again we are reminded that in the midst of life we are in death. Today we bask in the sunshine of joy, tomorrow we drink deep draughts from the cup of sorrow.

Rev. A.J. Swanson of the Swedish Mission church has laid down the burden of life. He has gone to that home beyond this earthly vale of tears; no more will his acts of kindness gladden our hearts; yet the memory of his noble Christian life will always be cherished in the hearts of our people.

By the death of Mr. Swanson, Lucas county has lost an old land mark. Twenty-six years ago he came to Chariton from his birthplace, Vestra Harg county, Linkoplug state, Sweden, and since his marriage in 1871 (actually 1872) to Miss Christina Johnson, has lived on his farm in Whitebreast township, where he received the summons of the Angel of Death at 5 o'clock on Friday morning, January 25th.

For over a year he had been a constant sufferer from the dread disease, cancer, the last six months being full of intense suffering, as the cancer slowly, but surely sapped the vitality from the manly form, once so full of vigor and hope. To the devoted wife and children, who have night and day bent o'er his cot and spared no pains, or thought no sacrifice too great, that they might pluck the thorns and strew the way with roses, we would say something that would put a star in your night of grief, a little flower in your lonely pathway, but we known how vain it is to "gild grief with words," and can only unite with the many friends of the community in extending to you our tenderest sympathy, and may the "Father of the fatherless and the widow's God" early brighten your starless sky.

Short services were conducted at the home by Adam Dale, in English, and Rev. N.F. Nelson preached the sermon in the Swedish language at the Mission church Sunday at 1 o'clock, after which the mortal remains were laid to rest in the Chariton cemetery.

So how did the Rev. Mr. Swanson end up with a Grand Army of the Republic flag holder at this gravesite? Here's what we think may have happened.

If you look beyond the Swanson tombstone you'll see a brand new government-issue marker placed at the grave of William M. Johnson and dedicated during a small service during 2011. Johnson, late of  Company A, 13th Missouri Cavalry, died in Lucas County on Aug. 4, 1901, and was buried here by his comrades of Iseminger Post No. 18, G.A.R.

But his grave, so far as we know, was never marked --- or if it was marked by an undertaker's temporary sign or something similar, that had long since vanished.

Some years ago, a descendant inquired about Johnson's gravesite and Darlene and others located it, using Chariton Cemetery records. They ordered up the new tombstone, commissioned its placement and sponsored the dedication ceremony.

I'm speculating that this is what happened:

Iseminger Post members and their auxiliary were very good at ensuring that the graves of all their comrades were marked with a flag holder and, on Decoration Day, a flag. They may have placed the G.A.R. marker, perhaps near some indication of the Johnson grave --- a temporary marker, a peony, something of that sort.

But as the years passed, memory of the grave passed and a puzzled (or irritated) cemetery worker out mowing grass --- or someone else --- picked the marker up and planted it at the nearest grave containing the remains of someone of the right age to be a Union veteran. We know the marker has been at the Swanson grave at least since the early 1980s, when inscriptions were copied for the Lucas County cemetery book.

None of this is especially important and it seems likely that A.J. Swanson will keep his G.A.R. marker, relevant to his life story or not. But I had fun trying to sort it all out.