Russell and those early Methodists 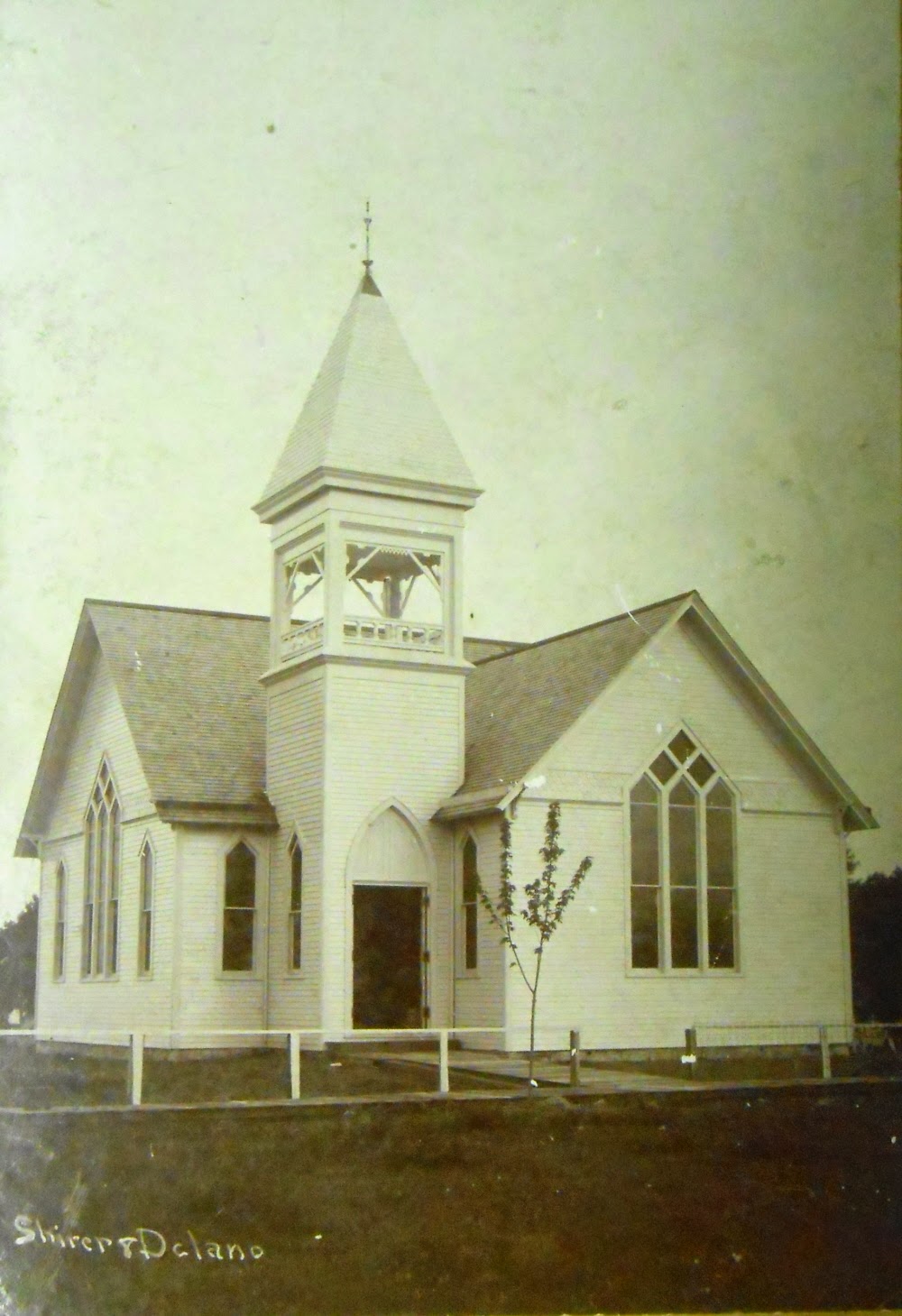 I was working with old photos at the museum yesterday morning, including this fine image of the second Russell Methodist Episcopal Church building, apparently taken about 1892 when it was brand new.

That seemed like good reason to pull out, too, a six-page handwritten manuscript, also in the historical society collection, entitled "History of Early Methodism in Lucas County, Iowa." The title is somewhat misleading --- the manuscript deals mostly with Lucas County's eastern townships.

The church building, dedicated during the fall of 1892, was enhanced as the years passed --- large stained glass windows replaced the original simple glazing. And it suffered a few indignities, too --- the bell tower was taken down at some point.

The manuscript was read on Oct. 15, 1903 --- about a year after the church was completed --- at an organizational meeting for Russell's first historical society by J.H. Cook, one of its leaders. Much of the research for the paper probably had been undertaken by J.L. Johnson, Methodist pastor at the time. Anyhow, here's a transcription of the manuscript:

The history of the Methodist Church on Russell Charge is somewhat meager; however, the following facts have been gleaned, to wit.

The first preaching in the county was at the home of Zura (Xury) West near Greenville in Washington Township during the year 1849.

Rev. A. G. Price and Joseph Ackerman had an extensive field of labor up and down the Des Moines River and Zura West’s house was one of their appointments. In 1850, Jas. Q. Hammond travelled the Edyville Circuit which embraced Xury West’s. In 1851, Robert Coles was assigned to and travelled the Albia mission and his appointments that year were Albia, Wests, Evans, Potts, Ireland, Soap Creek, Grays Creek and Mathews. That was the year of the great flood. Des Moines River was three feet higher than it had ever been known up to that time. Just for a moment imagine the difficulties of travelling so large a circuit without bridges and very meager road improvements.

In 1852, Chariton was honored with her first M.E. preacher in the person of Rev. E. L. Briggs who has since left the M.E. Church.

The mission was separated from Chariton this year and the allowance for ministerial support for the year was $387.40.

In 1856, Lagrange became the head of a circuit and Chariton the head of a district with Pearl P. Ingalls, P.E., and B.F. Williams, Preacher in charge, his allowance for support being $240.

In 1860, the conference was divided and the Lagrange Circuit was assigned to the Western Iowa Conference, R. S. Robinson, P.E., and Adam Burris, supply. The appointments inside the Iowa Conference were dropped and Highland, Barkers and Salem appear on the list.

The name of the conference was during the year 1864 changed to Des Moines Conference. This proved to be a very stormy year on account of the Civil War then raging. Neighborhoods, churches and families were divided. Bro. Bellamy, who was at that time pastor of the church, dropped a part of the work in the year 1865. Rev. Bennett Mitchell was the P.E. and Rev. B.B. Kennedy, P.C. Allowances were $600.

The war being over; church work revived and Bro. Kennedy met with great success in his work for God and the Salvation of men and women. Bros. Mitchell and Kennedy continued to labor in this same field during the year 1866 and during the year 1867 Bro. B. Mitchell was continued as P.E. and Bro. Jas. Bracewell was P.E. Bro. Bennett continued P.E. for the year 1868 and Bro. J.M. Rust was for this year P.C. The church records show that their labors during those years were attended with most glorious results.

In the year 1869 Rev. J.M. Conrad was duly installed as P.E. and J.M. Dudley, P.C. This year Russell takes its place at the head of the circuit and during the years 1870, 1 and 2 J.M. Conrad was the P.E. and Revs. J.S. Morrow and Riley Woods were each pastors of our church.

Bro. Riley Wood’s good work in the master’s vineyard proved to be a grand success. A large number uniting with the church and the church enterprises at Russell, Salem and Pleasant Plains were pushed to completion (this apparently means church buildings were constructed).

In 1873, Rev. J.W. Todd was made a P.E. Levi Park, P.C. 1874, Rev. D. Austin was assigned to Russell Charge this year. At the 2nd quarterly conference holden in the month of March 1875 a board of trustees were elected for the purpose of building a parsonage. Said board was P.P. Prather, J.B. Fergeson, Aaron Scott, A.V. Boyland, David Fluke.

During the conference year of 1875 the work was divided. D. Austin, P.C. at Russell, Greenville and Salem, and P.J. Volmer his assistant, taking charge of the north appointments of the circuit. In 1876, Rev. J. R. Horswell was the pastor in charge. The old parsonage at Lagrange was sold and proceeds turned into the treasury of the Russell Charge. The following year, 1877, J. M. Holmes was chosen P.E., and Rev. A. Thornbrue, P.C. Bro. Thornbrue served Russell Charge for three successive years and during his administration all old church indebtedness was fully paid, had good revival meetings and the results were one hundred and twenty-five persons were added to the M.E. church.

It was 1881 that Bro. T. McK. Stuart took charge of the work as P.E. and this year W. A. Wiseman was pastor. He proved to be a successful pastor and large numbers were added to the church, finances were all fully paid up and benevolence fund exceeded the apportionate regardless of the fact that crops were almost a failure. Rev. T. McK. Stuart continued to serve as P.E. for the year 1882 and J. H. Stevens was P.C. Presiding eldership went to Rev. A. Brown for the years 1883 and 4 and plain everyday John Harned was P.C. The work for those years was successful, both spiritually and financially. The Liberty appointment was dropped, a class formed at Zero which soon failed, leaving Russell, Greenville and Salem as the three appointments of this charge (Sept. 15th, 1903).

In connection with the above I will add the following to wit: The M.E. Church of Russell still continues to grow and prosper financially and spiritually during the past three years under the administration of Rev. J. L. Johnson, present pastor. Good solid Christian work has been accomplished and as an evidence of this fact will say that during the years 1901 to 3 seventy-five persons have become members of said church here at Russell and Salem either by letter or probation. The Epworth League and Sunday Schools are growing in numbers and interest and are proving to be living factors for the conversion and betterment of our unchristian young men and women. Finances of the church in each and every department are in most excellent condition this 15th day of Sept. 1903.