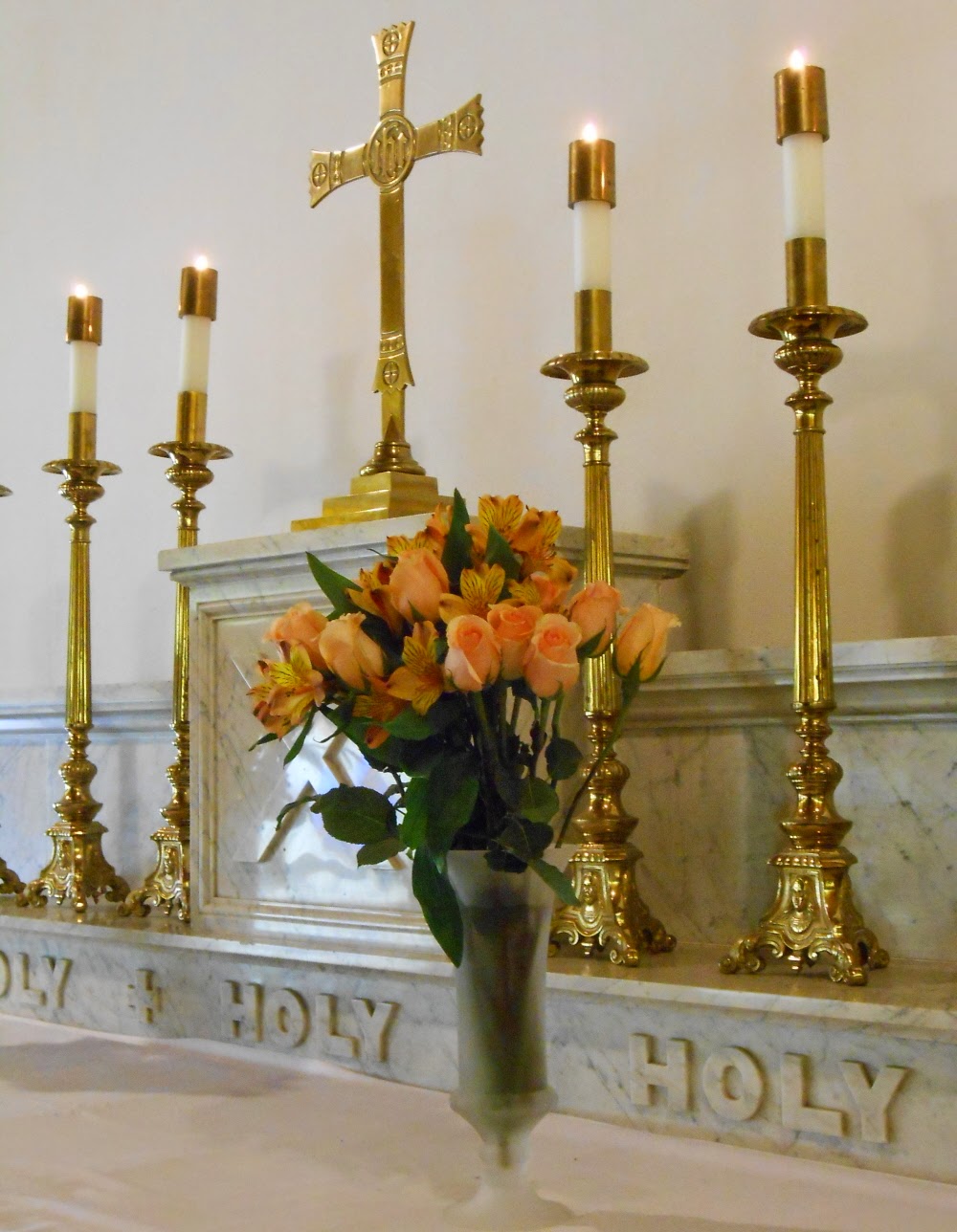 I'm recycling a photo here --- this image of flowers on the altar at St. Andrew's was taken last Sunday and I posted it to the church Facebook page. But I like it, so here it is again. It's my blog, and I'll recycle photos if I want to.

The cross, by the way, is the oldest item in our little church --- dating from the 1870s. There's no indication of who gave it, only an inscribed date and the information that it was given in gratitude for an unspecified mercy.

In addition to being the feast day of Christ the King, this also is the beginning of the final week of the church year --- and of Ordinary Time (for the time being). "Ordinary" in this usage doesn't mean "common," but is derived from "ordinal" and just means counted time. So it's also the 24th Sunday after Pentecost. The other briefer period of Ordinary Time in the church year stretches from Epiphany to Ash Wednesday. Just thought you'd want to know.

Some time during the next week --- perhaps on Thanksgiving day since we'll be having a cooperative meal at the church, the workaday green paraments of Ordinary Time will be retired and replaced by violet (call it purple, if you like), the Advent wreath will be assembled and we'll be ready next Sunday, the first in Advent, to light the first anticipatory candle of the new season and mark the beginning of a new year.

I'll be replacing all the other candles in the church, burning down now with the old year, too.

One of the advantages of attending to the liturgical calendar is the opportunity to observe two new years. Second chances always are welcome.

Many Anglicans and some in other protestant denominations prefer to use royal blue during Advent to differentiate it color-wise from Lent. That's a practice that can be traced, some say, to the Sarum rite, developed in England during the 11th century as a variant of the Roman rite. The Sarum rite remains embedded in Anglican liturgical patterns and the Book of Common Prayer, but doesn't come up much in general conversation. Now you can use the term properly.

Advent launched as a kind of of "little Lent," a season of penance and preparation --- and of performing tender mercies --- illuminating the road toward the joy of Christmas. That's why violet/purple is used.

One of the most merciful things we all can do during the upcoming season is not get involved in fussing about whether it's appropriate to wish someone a "happy holiday" rather than a "merry Christmas." Of course it's appropriate.  Any friendly greeting is. To argue about such an absurd thing is to mark yourself as a semi-literate buffoon.

If you want to be mildly subversive, however, try wishing all you greet with "blessed Advent" instead. That'll confuse 'em.

As previously mentioned, Advent also is a good time to perform works of mercy --- not that there's a "bad" time for works of mercy.

Six of these are outlined in the Gospel according to Matthew: Feeding the hungry, giving drink to the thirsty, sheltering the homeless, clothing the naked, visiting the prisoner and comforting the sick. A seventh, burying the dead, is derived from the Book of Tobit, part of the Roman and Orthodox canon; consigned by Anglicans to the Apocrypha but still valued.

So get out there and perform a work of tender mercy or two, too.