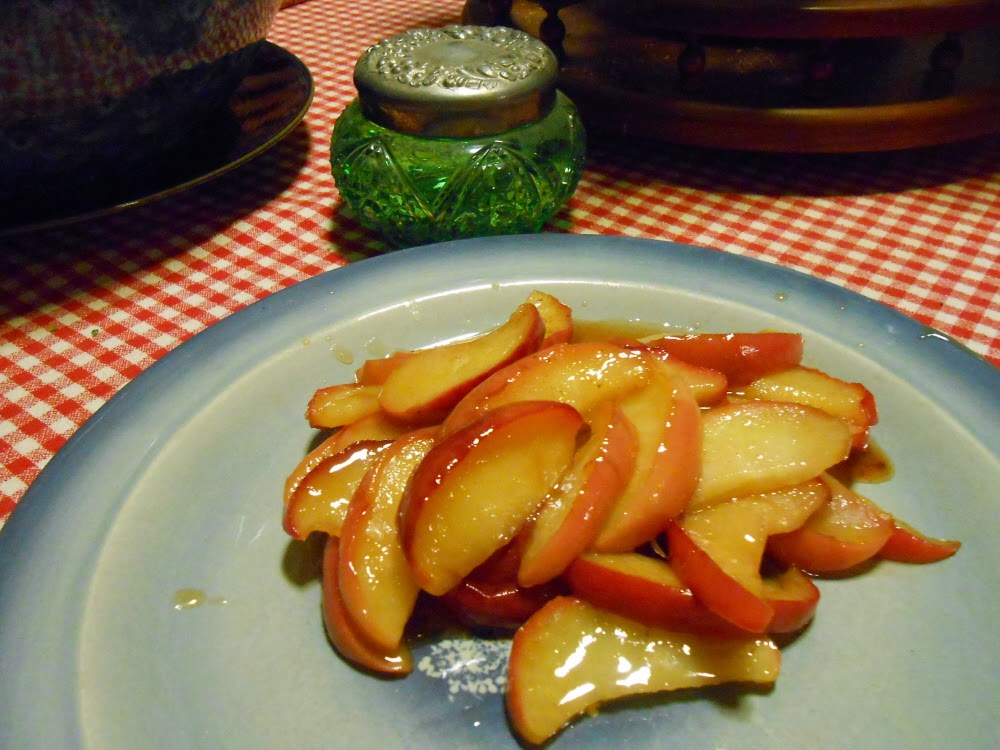 Nothing is guaranteed to take me back quicker to supper at the farmhouse kitchen table on a fall or winter evening than fried apples, something my mother served now and then as a special treat as the main dish of what traditionally in rural Iowa was a light meal. Dinner at noon was the big one.

As a rule the apples were home-grown Jonathans, smaller than what turns up in grocery stores nowadays; always with skin on --- color is part of the point. Link sausages go well with the apples. I added a modest three to the plate last evening before eating these.

Mother would have cooked these in a cast-iron skillet, uncovered and never would have left them unattended. I used a non-stick skillet with tight-fitting cover and did leave them unattended (except for an occasional glance) for about 10 minutes while they simmered.

Choose apples that have some tartness --- avoid Delicious, for example. I used two big Jonagolds because that was what I had on hand and they worked fine. That would have served two, I suppose, as a side dish.

2. Melt a quarter cup of butter to the sizzle point over medium-high heat in a skillet, then add the apple slices, stir to coat, then arrange in even layer. Reduce heat to medium, cover and simmer for about 10 minutes. Juice will cook out of the apples and blend with the butter. Don't even think of using a product other than real butter.

3. Do a fork or taste test to make sure the apples are soft, but still firm. You're not making fried applesauce, after all.