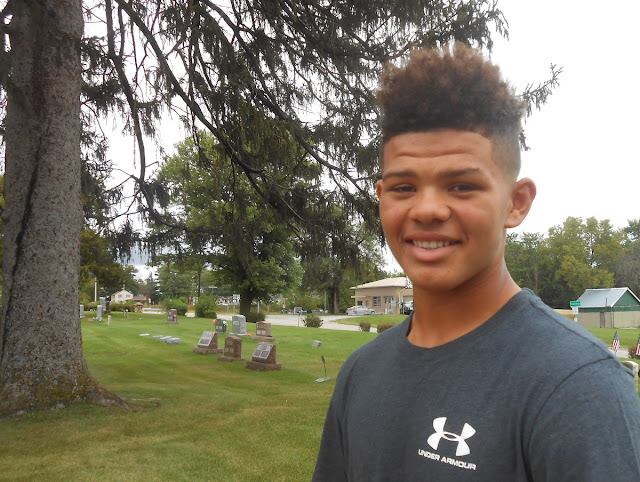 This is the third of six scripts used during Sunday's 16th annual Chariton Cemetery Heritage Tour. The subject is John Kay and the portrayer, Jayden Allen-Winston. Jayden is a freshman at Chariton High School.

My name is John Kay, born into slavery in Jackson, Mississippi, on the 20th of March 1845. Folks around Chariton knew me as “old and reliable John Kay” for reasons I’ll explain later, but I’m proudest of the fact I’m one of two Union veterans of color buried in this cemetery who turned back to fight for the freedom of our people once we had escaped those who thought they’d mastered us.

The other, my friend Bill Martin, is buried over there behind a government tombstone that bears his slave name, Ben Alexander --- the name he enlisted under. But my dad named me John Kay --- and that’s the only name I’ve ever known.

I didn’t know my mother --- she died when I was born. But my father was David Kay and he and his extended family raised me. It was from him that I learned much of what I knew about horses, knowledge that served me well.

I was raised without the expectation of freedom, but that began to change --- even in Mississippi --- as I grew into my teens during the early 1860s. And we learned within days after Mr. Lincoln announced the Emancipation Proclamation that on Jan. 1, 1863, we would be free. That news traveled fast through the black community, even though our owners did their best to keep it from us.

But we also learned that we would have to go north if we were going to claim freedom any time soon. So I walked away from Mississippi and north into Tennessee, dodging those who would harm me until I had safely crossed the Union line.

After I enlisted in the U.S. Colored Troops (it wasn’t until 1948 that President Harry Truman ordered an end to segregation in the armed forces), good luck and my knowledge of horses combined to land me the assignment as personal servant and aide to Major General James Birdseye McPherson, recently named commander of the Union Army of the Tennessee.

I was with General McPherson as we marched into Georgia with Sherman and was waiting behind the lines when he was shot by Confederate skirmishers on July 22, 1864 --- the highest-ranking Union officer killed during the Civil War. I was among those who helped prepare his body for shipment home to Clyde, Ohio, when it arrived at General Sherman’s headquarters, strapped to a barn door pulled from its hinges.

After that, I was reassigned to Company D, 101st Regiment of Colored Infantry. Our assignment was to guard the Louisville & Nashville Railroad and then undertake other assignments in Tennessee and Alabama until we were mustered out January 21, 1866.

Following discharge, I made my way from job to job north through Missouri and finally into southern Iowa where I landed at Chariton about 1875, age 30, and met Mr. Anderson Mason, also a U.S. Colored Troops veteran who had settled in Lucas County with his family during the late 1860s. In 1868, he became the first black citizen of Chariton to cast a vote. He was a successful barber and suggested that I might find work in the stables of the Maple Wild Stock Farm, a partnership of John Howard and Smith H. Mallory a mile west of the town square --- which I did.

It was through Mr. Mason’s nephew, Henry, also a barber but located in Knoxville, that I met Miss Martha Jane Jeffers, who would become my wife. Martha --- refined and well-educated --- was out of my league but she married me anyway.

The Jeffers were true Iowa pioneers, descended from free people of color who, aided by Quakers, had fled North Carolina as it became increasingly hazardous there and formed the Lick Creek African American Settlement in Orange County, Indiana. The Jeffers prospered and in 1848 sold out and moved west into southern Marion and northern Monroe County, Iowa, where they purchased several farms. There were at least three large Jeffers families in that vicinity; Martha Jane’s parents were Crudeup and Polly Jeffers who later farmed near Belinda in Lucas County. We were married at her home on May 8, 1881, by the pastor of the family’s church, Indiana Chapel Methodist.

We moved into a house on Maple Wild Farm and began our family of four sons --- William, Harry, David and Charles. Little Charlie died at the age of six months, on April 10, 1889, and it’s his tombstone that I’m buried next to. When he died, there was money to buy a tombstone; when I died 17 years later, there wasn’t, so my grave is unmarked.

Martha and I were among the charter members of Bethel African Methodist Episcopal Church --- built on the current site of Carpenters Hall. I served in every office the congregation offered, but was especially skilled at fund-raising. Many a Sunday I traveled among the rural churches in Lucas County to share our vision --- and to take up a collection that went into our building fund.

I also was among the organizers of Virginia City Lodge No. 2568, Grand United Order of Odd Fellows. This British variety of Odd Fellowship welcomed black members but the white Odd Fellows of Chariton, affiliated with the American Independent Order, were forbidden by their national organization from doing so.

Emancipation Day, celebrated in September and marking the announcement of the Emancipation Proclamation by Mr. Lincoln, was widely observed by black residents of southern Iowa during the 1880s and 1890s. The regional celebration was held in Chariton during 1888 and I was the principal organizer.

Meanwhile at Maple Wild Farm, my responsibilities increased as the horse operation there expanded into one of southern Iowa’s most widely known studs, a joint venture of several owners. My principal responsibility was Merry Comet, a Clydesdale generally recognized as the pioneer draft stallion of Lucas County. When the venerable stallion died at age 31 in 1891, it was said of him, “He did more to improve Iowa’s draft stock than any stallion ever brought into the state.” It also was said that I was the only man who could handle him --- and when Merry Comet’s obituary was published in The Chariton Patriot, I was listed as a survivor. Lucas Countyans took their horses seriously.

Although headquartered at Maple Wild, the business was named the Champion Horse Association and for the most part, I was in charge. This was how I earned the title, “old and reliable John Kay.” People knew they could trust me --- and my judgment.

By 1895, the operation had evolved into The Chariton Stock Farm Stud and operated at two locations, one on the farm and the other in a converted livery barn just north of the northeast corner of the square.

But by 1900, even though I was only 55, my health began to fail, I was going blind and could no longer work as I once had. Our sons remained loyal to us, however, and after that we moved to the places where they found work --- Russell, Indianola and finally Albia.

My remains were brought to Chariton on an early train on Monday and funeral services were held at Bethel A.M.E. Church. There were three preachers there for my send-off, the Rev. J. H. Bell of the Albia A.M.E. congregation, Rev. Preston Ervin of the Chariton congregation and the Rev. C. Wright of the Osceola A.M.E. Church. The church was full and as many faces there were white as black.