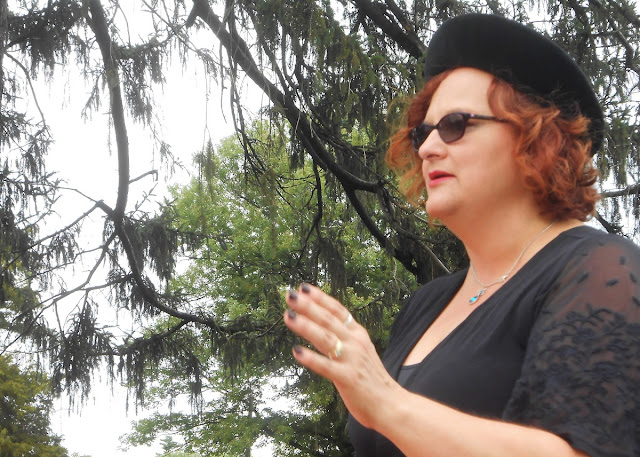 This is the second of six scripts used during Sunday's 16th annual Chariton Cemetery Heritage Tour, sponsored by the Chariton Historic Preservation Commission. The subject is Virginia M. Branner, one of Iowa's leading suffragists for more than 30 years. She was portrayed by Chariton City Manager Laura Liegois.

I should like to begin this afternoon by reminding you of the combined city/school election in this city on Tuesday, Nov. 5. If you are not registered to vote, register immediately. If you are registered and do not vote, my ashes will rise from the Branner tomb --- just across the way --- and smite you.

My name is Virginia M. Branner and I devoted 30 years of my life to the battle for universal suffrage that led a century ago to passage of the 19th Amendment to the U.S. Constitution on June 4, 1919, and to that amendment’s ratification on August 22, 1920.

On March 3, 1913, I was jeered as I carried the Iowa banner down Pennsylvania Avenue in Washington, D.C., during the largest suffrage march in U.S. history. That banner read, “The women of Iowa have been in bondage 67 years, but we will be free!”

Seven years later, we were free --- and during November of 1920 I was able to vote for the first time in a presidential election. So I have no patience with those who take this privilege for granted and do not utilize it. Especially if you are a woman.

My life began in East Tennessee on Dec. 5, 1852, at Dandridge, as the youngest of five children of John and Jane Branner. My father was an entrepreneur who invested heavily in land warrants issued to veterans of the late Mexican War. I was only months old when he departed for Iowa to trade those warrants for thousands of acres at the federal land office in Chariton, the base for his considerable fortune.

Although my parents maintained a business relationship --- Mother managed family businesses in Tennessee --- they were not fond of one another. The separation was not a hardship for either.

I began my education at the Brazelton Academy for Young Women in Dandridge, but then Civil War engulfed our little town and life became very difficult.

Both of my brothers identified with the Confederate cause. Thomas enlisted immediately, during May of 1861, in the 3rd Tennessee Infantry; Bone, after traveling south from Iowa, enlisted in the 43rd Infantry during October. Thomas was killed in combat at age 18 during June of 1864, but Bone survived --- and once the war was over decided to return to Iowa and continue his study of the law.

Mother, concerned because of post-war violence and the hostility between Union and Confederate partisans, decided that both I and my older sister, Victoria, should accompany Bone back to Iowa and relative safety in 1867. Papa enrolled us in the Bishop Lee Seminary in Dubuque, an Episcopal boarding school for girls.

Three years later, Victoria and I returned to Tennessee --- not expecting that our father would die only a few months later, in March of 1871, age 56, with only Bone at his bedside. I remained in Dandridge until Victoria married Union Gen. Joel Dewey on the 14th of November, then returned to Chariton, my home for the most part ever since.

In 1873, I made a noble effort at marriage, uniting with Charles H. Palmer, son of Chariton’s leading hardware merchant, during October. Charlie, however, was not husband material and I lacked the inclination to mother him. So we followed my parents’ example and began to live independently. We divorced 20 years later, during 1894, and a judge allowed me to reclaim the name “Branner” on Jan. 1, 1895.

During 1885, both my mother, Jane, and sister, Victoria, now twice a widow and with a young son named Walter, had decided to join Bone, still a bachelor, and myself in Lucas County to be nearer the principal source of our considerable collective income.

Victoria and I --- we generally worked in tandem --- sharpened our activist skills in the 1880s and early 90s as members of the Chariton Improvement Association, a group of prominent women led by Jessie Mallory Thayer. Our principal interest wasn’t suffrage, but our adversaries were men --- city leaders who considered the absence of sidewalks, ungoverned public dumping, inadequate sewerage, lack of parks and uncontrolled vegetation and domestic animals to be trivialities. We educated them to the point that men eventually asked to join us in efforts to improve our city.

In 1894, those of us who had watched in frustration as other states passed suffrage legislation had salt rubbed into our wounds when the Iowa Legislature voted to allow women to vote, sort of --- but only on “yes” or “no” issues. We still were not allowed to vote in any election involving candidates for public office. That slight galvanized us.

Victoria and I were principal organizers of the Lucas County Suffrage Assocation, part of a nationwide network. During 1897 and 1898, we sponsored regional suffrage conventions in Chariton, the 1898 convention a three-day affair at First Baptist Church.

My specialty became public relations and I began to pen a regular “Suffrage Department” column for The Chariton Herald, reporting suffrage news from near and far. Victoria or I also traveled to every suffrage convention held in Iowa and to many others elsewhere in the country. We won strong backing from the editors of all three of our local newspapers, from our local lawmakers and from the pastors of most of our churches --- but suffrage measures continued to fail in the Iowa Legislature.

In 1906, we took advantage of a loophole in election law to elect two women --- Kate Penick and Edna Whitfield --- to the Chariton School Board. Women could not vote of course, but we could run, and in this instance Kate and Edna emerged victorious. The male candidates turned many against them by refusing to have their names printed on the same ballot with women.

In 1910, I was elected treasurer of the Iowa Suffrage Association and moved to Des Moines to work full-time in the association’s office in the Equitable Building. I remained in Des Moines for several years, working to promote suffrage across the state.

Finally, during its 1916 session, the Iowa Legislature passed for the second time a universal suffrage amendment to the Iowa Constitution and scheduled a ratification vote for June 5.

At this point, the effort in Lucas County and elsewhere shifted into high gear. Public informational meetings were scheduled across the county --- in towns and in churches. Victoria's daughter-in-law, Ruth Leonard Dewey, led the effort on the ground.

Although disappointed by the outcome, we were by no means defeated. Suffragist focus now shifted from state to national level and, during 1919, Congress passed the 19th Amendment to the U.S. Constitution and passed it on to the states for ratification. Iowa became the 10th state to ratify the amendment on July 2, 1919; and on August 26th, 1920, Tennessee became the 36th state to ratify, thereby enacting the amendment.

I was 67 years old when I cast my first presidential vote --- tired and in failing health. A trip to California in the hope a winter there would refresh me proved futile and in April I returned home to Iowa, moving finally into Victoria’s home so that she could nurse me. I died there, age 68, on September 16, 1921. 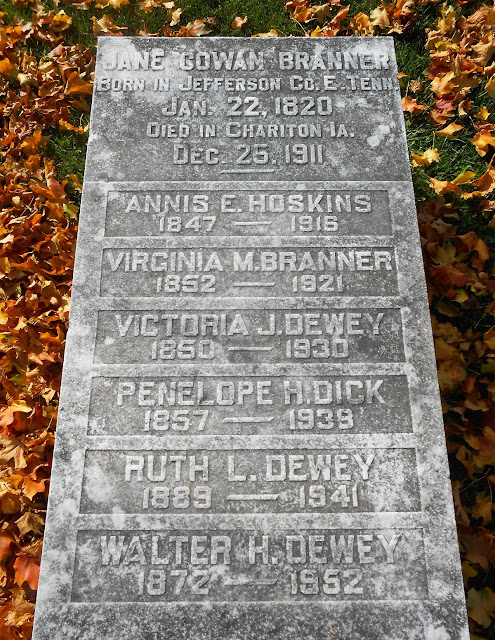