Hannah Shockley's cause of death 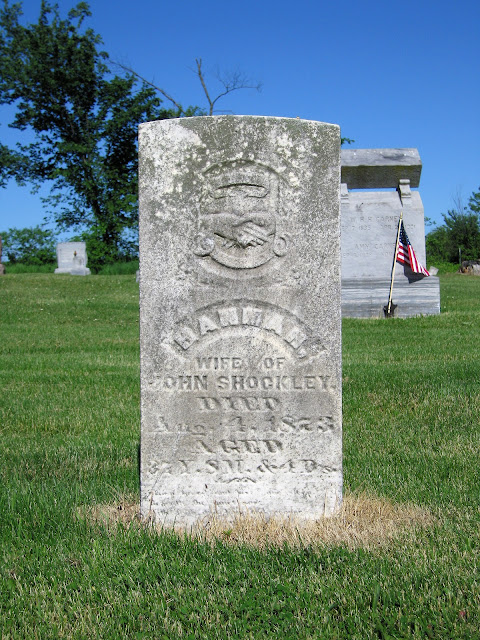 The most common causes of death for younger women back in 1873 --- when Hannah Shockley was laid to rest at age 37 in Brownlee Cemetery, northwest of Williamson --- were complications of childbirth and tuberculosis.

But Hannah died suddenly of previously undetected heart disease --- a cause discovered during a relatively rare postmortem examination carried out by four Chariton physicians at the insistence of her husband, John.

Hannah's death is of special interest to me because upon her death my great-great-grandparents, Jeremiah and Elizabeth (McMulin) Miller, took in one of her twin infants, Laura, just 9 months old, and raised her as their own.

Hannah had married when she was 17 and had given birth to 11 children, eight of whom were living when she died in 1873.

Here's the report of her death as published in The Chariton Leader of Aug. 6, 1873:

"The wife of John Shockley, living 6 miles northeast of Chariton, died very suddenly on Sunday night last, or rather on Monday morning, of heart disease. On Sunday she was as well as usual or in rather better spirits and retired as usual on Sunday evening. But a child of the family being sick, both she and her husband were awake frequently during the night, and talked about the condition of the child.

"About half past two, they awoke and spoke about giving the child medicine, but it being asleep they decided not to wake it, and fell asleep again. Sometime between this and morning, Mr. Shockley awoke and spoke to his wife, and made an effort to arouse her, but failing in this the neighbors were called in, and she was found to be dead; at least Dr. Heed, who was attending the sick child was called out about 7 o'clock in the morning, and although the body was still warm, could find no evidences of remaining life.

"During the day (Monday) at the request of the husband and friends, Doctors Heed, Baird, McKlveen and Gibbon went out and made a careful examination of the heart, and learned that the cause of death was Heart Clot. The examination showed that all the valves of the heart were destroyed except one set, the aortic, and that the disease was a peculiar one, in that no serious inconvenience or suffering had marked its existence, as is usual with heart disease."

I wrote more about the Shockleys back in 2005 in a post entitled "Brownlee Cemetery: Dead End." Since then, the Lucas County Pioneer Cemetery Commission has restored the cemetery and any maintenance issues that existed then have been resolved.
Posted by Frank D. Myers at 6:27 AM