All the gold in California -- passing through Chariton 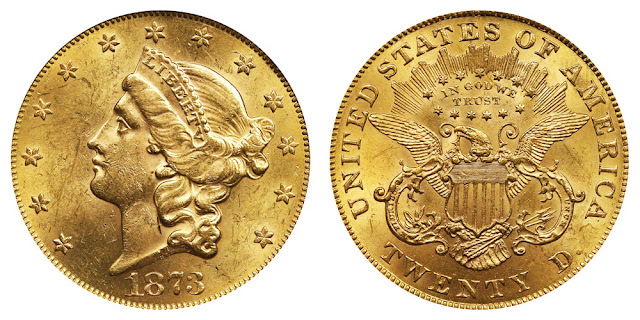 Iowa today often is considered "fly-over country." But back in the day, everyone who was anyone and nearly everyone and everything else, too, passed through --- on the state's rail network. Chariton always has been on a main line, given the final (small) link during March of 1873 when the Union Pacific's Missouri River railroad bridge linking Council Bluffs and Omaha opened (prior to that, rail cars were ferried across).

Later on that year, on Thursday, Aug. 14, a great treasure --- some $2 million in $20 gold pieces --- passed through the depot in Chariton, bound for New York City. Few knew that at the time, but a week later weeklies and dailies across the state published the news. Here's how the report in The Chariton Patriot of Wednesday, Aug. 20, reported it (a few errors included):

"A Big Pile --- Three million dollars in specie passed through Chariton, Thursday last, via the B. & M. railroad en route for New York. The gold was all in $20 pieces. Six clerks from the San Francisco branch of the U.S. Treasury Department accompanied the treasure --- which was securely locked in fourteen express safes. A strong escort of soldiers also accompanied them across the great plains, but turned back at Omaha."

The Des Moines Register of August 19, with more space at hand and more typesetters on the payroll, republished a far longer story that had first appeared in The New York Sun of Monday, Aug. 18, and provided a more accurate and complete account of this transcontinental transaction, in part as follows:

"On Monday afternoon there arrived at the Sub-Treasury in (New York City) $2,000,000 in gold coin. It was forwarded by the Adams Express Company from the Sub-Treasury in San Francisco. The weight of this coin was about four tons. It was packed in twelve strong iron chests, each about two feet and a half in length, by sixteen inches in breadth and depth.

"The gold consisted entirely of double eagles, enclosed in 100 stout canvas bags, each containing $20,000. Every bag bore the seal of the Assistant Treasurer in San Francisco, and each of the chests had three combination locks. The explanation of the combinations was sent to Assistant Treasurer Hillhouse in two installments, one by mail, and one by express. This was to prevent its possible use in the event of its falling into unworthy hands.

"The car containing the treasure was guarded by nine armed men. As an additional security, the Express Company was held responsible to the Government for the safety of the gold. On its arrival here it was carried in express wagons to the Pine street entrance of the Treasury, where the chests, which weighed between six and seven hundred pounds each, were placed on trucks and rolled into the coin division. The bags were emptied and the contents counted by weighing. By this mode the absence of a single piece would be instantly detected, as the exact weight of $20,000 in gold coin is registered. About $1,000,000 of the treasury is fresh from the mint, and that it was necessary merely to weigh. The remainder, having been in circulation, is to be examined piece by piece to see that every one is genuine. The experts began this labor yesterday, and will be occupied in it for a week."

So as it turned out, the treasure that passed through Chariton had amounted only to $2 million and nine rather than six men had been guarding it. Still, the report most likely fueled countless conversations that long-ago Wednesday, and in the days thereafter, and the development of quite a number of what-if? scenarios, too.