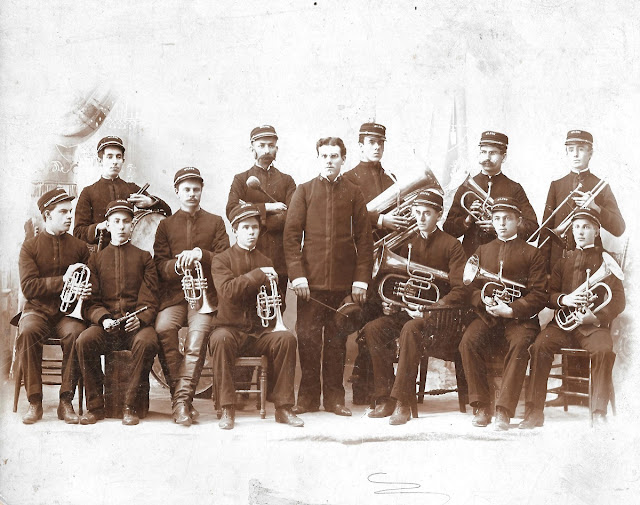 Band music has been a staple in Chariton for about as long as there's been a Chariton, commencing with brass bands like this one, a veritable music machine from the time of its organization in 1895 until 1897 when its organizer and director, Mortimer E. Wilson, accepted a teaching position in Winfield, Kansas.

During the summer months, there were concerts on the square every Friday evening and the band opened now and then for vaudeville acts at the Mallory Opera House. If there was a parade or any other event in town where martial music was appropriate, the band was there.

These two photographs from the Lucas County Historical Society collection were taken by Clarence Rose, whose Rose's Elite Studio was located on the north side of the square, and most likely date from the summer of 1896. 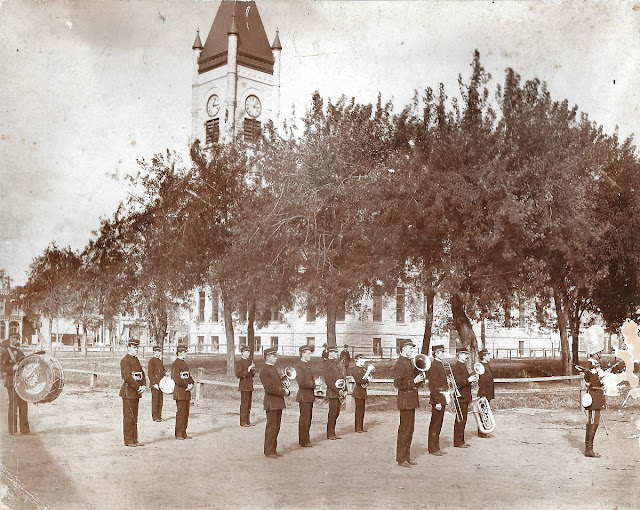 We don't know the names of the band members --- no one thought to identify specifically the men photographed here. But Mortimer aimed for 16 members during the years he directed the band and the number of musicians always was near that number.

We do know that the intense looking young man in the center of the top photo is Mortimer himself, about 20 at the time. He was a saloon-keeper's son whose musical talent was noted early by Jessie Mallory Thayer, who became his mentor, muse and patron for the remainder of her life. When his parents moved on, the lavish Mallory home, Ilion, became his second home. Eventually, he married a Chariton girl, Hettie Lewis, and they had a son, Mortimer Jr. His principal classical instrument was the violin.

During 1897, Mortimer accepted a teaching position in Winfield, Kansas, then moved on the next year to a similar position at the Culver Military Academy in Culver, Indiana.

Wilson moved from Indiana to Lincoln, Nebraska, during 1901 when he became first an instructor and then director of the department of music theory and composition at the University of Nebraska.

About 1910, Wilson and his family traveled to Germany where he studied for two years in Leipzig and Vienna. In Leipzig, Max Reger was one of his mentors.

Finally, the Wilsons moved to New York City where he devoted the remainder of his career to composition, conducting and teaching. Among his students was another Iowa boy, Mason City's Meredith Willson.

Mortimer's career was cut short by death from complications from pneumonia at his home on Riverside Drive in New York City during January of 1932, age 56. His music still is out there, waiting to be performed, but rarely is.