The Library's 1889 May Party: A Vision in Calico 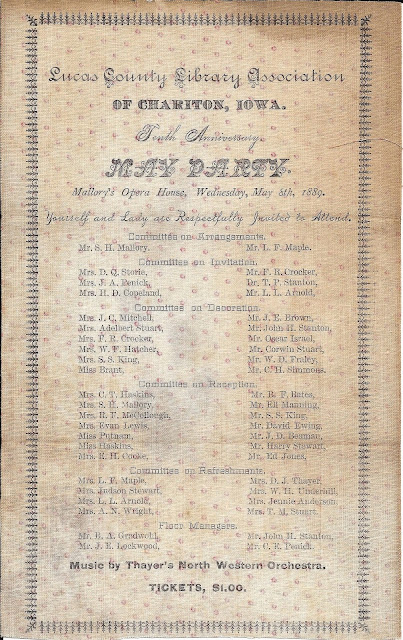 Chariton's Free Public Library opened its doors for the first time during 1879, just after Dr. William H. and Laura Gibbon completed their new drug store building on the northwest corner of the square. They were enthusiastic backers of the library concept and offered the big front room upstairs in their new building as a site --- where it remained until 1904 when the current Carnegie library was completed. The building still stands, although the old library space now is occupied by a modern apartment.

Ten years on, during May of 1889, the Lucas County Library Association --- the coalition of civic organizations and individuals which supported the library, still lacking tax revenue --- decided to celebrate with an anniversary May Party. Innovative invitations for the big do, scheduled for the Mallory Opera House, were duly printed --- on calico --- and distributed.

Somewhat surprisingly, one of those invitations survived and --- 128 years later --- is in the collection of the Lucas County Historical Society. It's faded a little, but remains in good condition. The calico colors and patterns are clearer on the back, but evident here, too. This is a scan that I did yesterday, while cataloging "ephemera" --- items that were not necessarily intended, when produced, to last 130 years or more more.

The party was held on Wednesday evening, May 8, and duly reported as follows in The Chariton Democrat of May 8, 1889:

The May party heretofore announced as a benefit for the Lucas County Library Association, of Chariton, was given at Mallory's Opera Hall last evening and was a splendid success, as it deserved to be. It could not help but be a success in view of the ladies and gentlemen who originated it and devoted their time and skill to the work of making it a scene of enjoyment for all. The occasion was the tenth anniversary of the Lucas County Library Association, and the proceeds were to be devoted wholly to that society. The feature of the party was that each lady should wear the regulation calico dress, and this requirement was faithfully observed by all. The invitations were sent out some ten days ago, printed on calico. It was essentially a calico party. And it occurs to us that if the dear ladies knew how sweet they appeared in that regulation costume it would be adopted as the standard dress material for all time until the wisdom of the ages shall discover a prettier (fabric). It was a subject of general regard that the ladies never appeared to a better advantage.

The Hall decorations were beautiful and elaborate, the splendid results being due largely to the untiring efforts of the chairman of the decorating committee, ably seconded by other members of her committee. Lovely festoons of flowers and evergreens hung in graceful curves from the center of the ceiling to the sides and corners and made the stage and music stand appear like a veritable flower garden.

Another feature of the entertainment was the refreshment room. For this purpose the large room over Kennedy's store was used, opening directly from the Hall. This was as profusely decorated as the Hall. Here were served such delicacies as cake, ice cream, lemonade, etc., and was liberally patronized by the dancers.

The music was excellently rendered by Thayer's Northwestern Orchestra, of Des Moines. The ticket sales numbered 75 and the net proceeds were about $50, not so much as it should have been, but generally satisfactory considering the real enjoyment that was shared by every participant.