But I never had a friend in Jesus ... 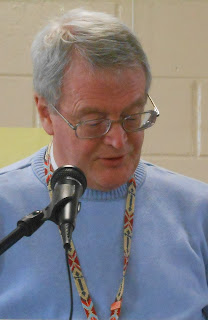 Our bishop, the Rt. Rev. Alan Scarfe (left), was at St. Andrew's Saturday afternoon to lead one of many similar informal services he'll be conducting across the Diocese of Iowa this year, themed "Revival 2017." And we had a wonderful group for this, a mix of parishioners and friends gathered in a circle in the parish hall with the bishop, assisted by the Rev. Meg Wagner, diocesan communications specialist and also, now, interim vicar at Trinity Church in Ottumwa.

The bishop raised a few Episcopalian eyebrows last year when he started throwing that term, "revival," around. This is not something Episcopalians do, some said --- trying to imagine fire and brimstone preaching, speaking in tongues, perhaps, and Anglican altar calls.

As it turned out, what the bishop envisioned, although it reclaimed a term more widely used in other  traditions, was was an invitation to spiritual contemplation and renewal.

A part of the service Saturday was an invitation (non-mandatory) to "witness," another term infrequently used by Episcopalians. In this case, it was an invitation to share stories and the setting was so comfortable that many of us did.

Here's a version of mine, a brief account of how 70 years on someone --- once an outcast --- found himself sitting in a circle in a small church in the south of Iowa and feeling at home.

I grew up as a gay kid in the 1950s and early 1960s, a time when folks like me were universally despised  --- perhaps not specifically but certainly in a general abstract sense --- by Christians. My parents were not "churchy" people, and I have always been grateful for that. I never heard either use pejorative terms about anyone --- ever, nor was I pressured to to fit into this or that neat category. That sort of name-calling and practice I came to associate with Christians.

But I did learn from those around me fairly soon that I did not have a "friend" in Jesus then --- and that I never would. The atoning Jesus concept became and remains an abstraction --- although the moral teachings attributed to the rabbi, Jesus, began to resonate as the years rolled on.

It also occurred to me, as time passed, that the "god" apparently experienced by most I came into contact with was largely a factor of imagination, reflecting individual hopes, fears and prejudices rather than anything resembling what some have called the ultimate ground of being.

None-the-less, I discovered after enrolling at the University of Iowa that I loved going to church, although not in search of salvation. There was stained glass --- First Methodist; music --- Gloria Dei Lutheran's new baroque organ; dance and liturgical innovation --- St. Thomas More Catholic; and traditional liturgy at its best --- Trinity Episcopal. Even, heaven help us, progressive Baptists (First Church).

Later on, while living and working in a tiny town in North Iowa, I was baptized and confirmed in the Lutheran tradition and enjoyed every minute I spent among those wonderful people.

But eventually, when it became evident I had to be far more frank with far more people about this sexual orientation thing, it also became necessary to acknowledge that there was no place among them for me.

So I spent some years after that among Unitarian Universalists --- the first ever to welcome me and others like me without reservation --- and UUs remain among my favorite people.

But I missed the sacraments, the liturgy and the music.

And so, when the Episcopal church opened its doors to everyone without regard to gender, orientation or gender identity, I stepped through. It seems unlikely that I'll ever be among the orthodox faithful, too much water under the bridge for that. But it's good to be home.