The Champlin Store at May Crossroads 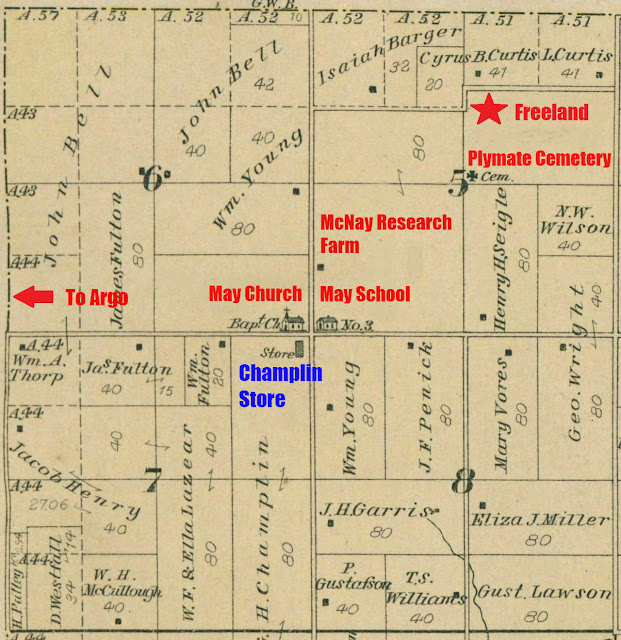 I'm tossing George  H. Champlin's store at Warren Township's May crossroads into the mix today, sandwiched between installments of W.D. Gay's memoir, because he mentions it several times --- and most if not all memories of this third element of what once was a lively neighborhood center most likely have faded entirely away.

But there was a store here, located in the Champlin home, from the early 1870s through the first decade of the 20th Century --- a 40-year record that many other businesses located in places that would seem to have better prospects have failed to match.

It was not a big store, occupying one big room most likely custom-built for the purpose, but sold all of the everyday necessities to those who lived nearby, thus making a trip into Derby or Chariton unnecessary. There are some indications that Champlin also sold seed and nursery stock, kind of appropriate since the property has been incorporated by now into the ISU-owned McNay Research Farm along with the sites once occupied by May School and May Church.

I've resurrected a map developed earlier to locate other neighborhood landmarks (in red) and named the store in blue to show where it was at. The photo of the Champlin store and home, as bad as it is, was all I could find --- in the 1978 Lucas County history. The house stood many years after the store had ceased to be, a landmark because of its distinctive tower.

George came to Warren Township first during 1854 when he was 18 and, according to his obituary, purchased part of the farm where the store was located then. He was a native of Orient, Long Island, born June 13, 1836.

When the Civil War broke out, however, he returned to Long Island and enlisted as a private in Co. C of New York's 165th Zouave Infantry Regiment on Nov. 28, 1862. He earned promotion to 1st sergeant during April of 1863 and then to 2nd lieutenant. Upon his honorable discharge, he was breveted a captain.

After the war, George roamed for a while, living first in New Orleans and then in his native Long Island before returning to Lucas County in 1870. Three years later, on Nov. 5, 1873, he married Sarah Frances Culbertson and brought her to the farm to live.

The Champlins would produce 10 children during the course of their marriage, so a large house was in order and it's believed that the distinctive home, incorporating a store, was built soon after their marriage. May School already was located northeast across the intersection at the time. May Church would come along in 1890.

During early May of 1882, Chariton's Patriot sent a representative out to sell subscriptions in Warren and other townships and to collect information for brief biographies of those who subscribed for publication. Here's what he came up with for George, published on May 10:

"From Suffock Co., N.Y., to Iowa in '54, has a farm or 200 acres, good, large house of 8 rooms, stables, sheds, &c., 3 horses, 68 cattle and an orchard of 300 trees; was married to Miss Sarah Culbertson by whom he has 3 boys and 2 girls, was a soldier in Co. C, 165th N.Y., serving in the Department of the Gulf, particularly in the siege of Port Hudson, and the other principal battles and campaigns of that Department."


George and Sarah continued to operate the store until his death at age 74 on May 25, 1911. Funeral services were conducted at May Church, just across the road north of the house, and his remains were taken to the Derby Cemetery for burial.

The children, as listed in his obituary, were: Louis and Mabel, of Ames; John of Ottumwa; Mrs. Ina Conner, of Montrose, Colo.; Mrs. Maud Wright, of Warren Township; and George, Howard, Nellie, Florence and Ada, still at home.

Sarah continued to live on the farm and operate the store for some time after George's death and the farming operation was taken over by son George, the last family member to own and occupy the property. Sarah --- about 20 years George's junior --- lived until July 18, 1934. She was buried by George's side in the Derby Cemetery.

After the death of George Champlin Jr., the farm was sold to the Kermit Kendalls.

Development of the McNay Memorial Research Farm began during 1956 with the gift by Harry and Winnie McNay of the 480-acre McNay farm just to the north and east. Commencing in 1967, the research farm began to expand and during 1973, the Kendalls sold the old Champlin farm to Iowa State University, too.

The McNay farm now includes about 2,000 acres --- including the sites of the Champlin store and home, May Church and May School --- and not a trace of the old crossroads community remains.

Nellie (Eleanor) Champlin married my great Uncle, Clell Fulton, and moved to Derby where he was employed in the bank. The Fulton farm was next neighbor to the west of the Champlin farm and both Nellie and Clell went to May School and attended May Church. I have a school enrollment program with both their names and also siblings names listed.

Thanks so much for all this information, it is so interesting to me as this is my families history as well. I remember my Grandmother, Claire Fulton, telling tales of May school!