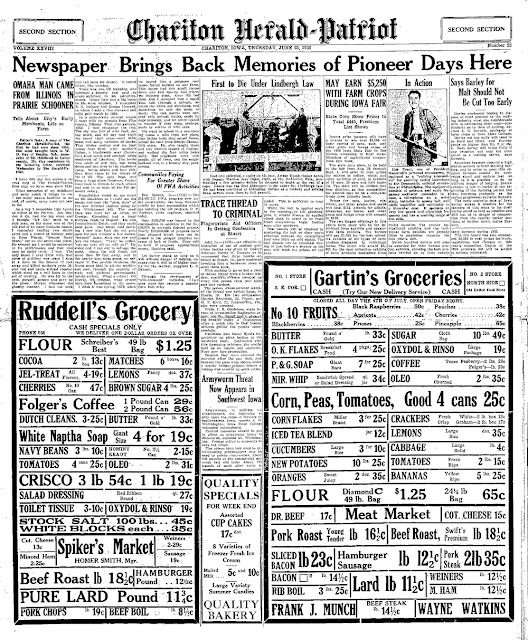 This is the first in a series of five remarkable letters from a gifted writer and master story-teller named William DeForrest Gay, who grew up during the late 1860s and 1870s along the Mormon Trail in what I still call the May neighborhood of Warren Township, even though May Church and May School are long gone. They were published in The Herald-Patriot during 1936 as Mr. Gay was nearing the end of his life.

Born Oct. 11, 1863, in Pike County, Illinois, he was the oldest son of Thomas and Lotilla Ann (Woods) Gay, who came by mule-drawn wagon with their family to Warren Township during 1868 or 1869. Their home farm, northeast of the May crossroads, was at the site of the pioneer post office Freeland and included the Plymate burying ground, where the patriarch of that family was buried.

Much of W.D. Gay's working life was spent in the Page County town of Essex, where he worked as a watchmaker and jeweler and also was a community leader. By 1936, after a series of personal and physical disasters, he was a resident of Nazareth Home for the Aged Invalid in North Omaha, a part of the comprehensive Lutheran Immanuel Deaconess Institute's comprehensive health-care system. He could not walk, having lost both legs in the aftermath of an automobile accident, and he was going blind. But his spirit and his talents remained unimpeded.

I have this day run across a recent copy of The Herald-Patriot, first copy we have seen since 1884.

What memories of my childhood and early youth it brings to me. I see many names familiar to me and, of course, many more are new to me.

As a boy I remember Lige Lewis as editor of the Patriot. Jos. Braden & Co. had the big store and I thought "Mr. Co." must be a rich man, as his name was at the tail end of so many business names. I remember trading two skunk skins and a bushel of hickory nuts to Gene Huyck, "Second Hand Store," for an old seven-shot pistol. He assured me I would be surprised at its performance and that was once he spoke truly. I was. The only blood I ever drew with that piece of artillery was when I shot at a dove on the ground 12 feet away and killed mother's prize 20-cent red and green striped rooster, which stood on a rail fence in the act of crowing. He was hit in the neck, gurgled, gasped and gave up the ghost. Mother witnessed the ghastly murder. I had the neck and tail bone for dinner. It tasted bitter, like quinine.

There was, too, Eli Manning, who operated a grocery and used to quote scripture in his advertisements. Henry Law had a big horse in his store window. I remember S.H. Mallory and George Howard, to whom I sold a fine diamond and solid gold watch in 1894.

In a mule-drawn covered wagon I came with my parents from Pike County, Illinois. That was autumn, 1869. I well remember the trip. The sky was full of wild fowl, going south, and all day and night we heard their cries --- sand hills, geese and many varieties of ducks.

That winter mother and we four young ones lived with mother's father (Thomas Knight Woods), a blacksmith near Champlin's store seven and one-half miles southwest of Chariton. The house was made of oak logs, one room down and one close to the clapboard roof. Seven adults and four children lived there in the winter of 1969 or 1868. The only heat was from a huge stone fireplace. Father went back to Illinois to teach school and sent to us most of his $30 per month salary.

Grandfather would let me stand on his shoulders so I could see the smoke and hear the "choo, choo" of the new railroad engines going up the Whitebreast hill. The road then was built far as Afton, or Creston.

Granddad had a huge shotgun, made by himself. He was Pennsylvania Dutch, and they made good guns. One bitter cold morning I saw him load the old gun, open the east window a few inches, "scrooch" down, shut one eye and jerk the trigger. "Yah," he yelled, "eat my corn all up will ya?" My sister and I ran out to salvage the meat. Along the rail fence, not more than 50 feet away, and in the newby blue stem grass, we salvaged 11 fine prairie chickens, the finest game bird in all the world --- and now, through the stupidity of state and national governments, nearly extinict. What a crime! Oh liberty. Oh religion. What crimes have been committed in thy name.

I think it was spring, 1870, when we moved into a gorgeous new house Father builded on our farm. This house had two small rooms down and two up --- up was where we children slept. Over the bed Gene (his brother, Eugene Gay) and I occupied was a small knot hole through a shingle, between the white oak sheathing, and sometimes we saw the moon or stars. The oak boards were covered with animal tracks, made by dogs probably, and we never ceased to wonder if they were, perhaps, made by wolves or wild cats.

We went to school in a one-room log house a mile from our place, then father built May school house, across the road from George Champlin's store. He also taught there and two winters taught at Goshen, and walked the four miles twice daily. Our neighbors were nice people, all of them, and the neighborhood was, in a homely way, prosperous.

Further letters will follow.
Posted by Frank D. Myers at 6:46 AM