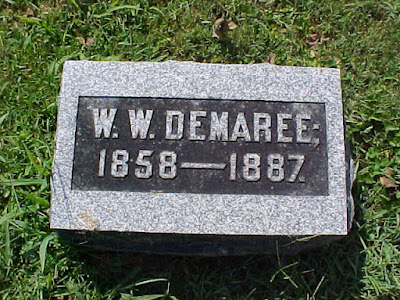 This small mystery from Lucas County's past begins with a three-line news item published in The Chariton Herald of Thursday, July 21, 1887:

"A dead man, unknown, was found in Whitebreast creek near East Cleveland yesterday, with $45 in his pocket."

The area ran east-west parallel to and north of the C.B.&Q. rail line, which crossed White Breast Creek twice at a broad bend beyond the settlement. There were no further reports regarding the death in The Herald or other Chariton newspapers (that I could find at least) in the days and weeks that followed.

But The Humeston New Era, in its edition of the week that followed the death, provided a little more information:

"The body of an unknown man was found in Whitebreast creek near Lucas last week. From a memorandum book found in his pocket it is supposed that his name was W. Demaree, of Madison, Indiana. So far it is not known whether it was a murder or suicide."

Whoever examined the body did file certification of death with the Lucas County clerk. That entry identifies Wm. W. Demar (sic) as age 28, a farmer, born in Indiana, who died at Lucas of "injuries on head." The remains, according to this report, were shipped to Madison, Indiana.

Out in Indiania, The Jeffersonville Daily News published in its edition of Thursday, July 22, this brief item datelined, "Madison, July 21":

The final report I've found regarding Demaree was published in The Chariton Democrat of Sept. 29, 1887:

"A rumor was started (in Lucas) Monday that the murderer of Wm. Demaree, whose lifeless body was found in Whitebreast Creek near Lucas some two months since, was found --- that a man in Denver had confessed to the deed. As no authority could be given the report was doubtless false."

That's a photo at the top of this post of William's tombstone, located in Joyce Cemetery, not far from the Ohio River east of Madson, Indiana. it was added to his Find A Grave entry by Lori Case.

That entry states that, according to funeral home records, his remains were buried here on July 24, 1887.

The entry also identifies his parents as James and Mary (Hollingsworth) Demaree, buried not far away, and shows that he had a daughter, Wilhelmina Eva "Willa" Demaree Blinton, born postumously on Feb. 1, 1888, some months after her father's death.

A little more digging around online produced the information that he had married Eva Irene Comley on Dec. 6, 1881, in Jefferson County, Indiana, and that family stories contained the tradition that he had been "robbed and murdered in Iowa."

But how do you suppose William really died? Circumstantial evidence suggests that he was aboard a passenger train traveling from Indiana through Iowa to Nebraska just before he died, perhaps as a young farmer headed west in search of land to purchase.

There would be no reason to disembark at Lucas, the depot that also served Cleveland; and even if he had, White Breast Creek is a considerable distance away.

The most likely explanation is that he fell from the train as it crossed the creek by accident, assisted by a push or intentionally (although jumping from a train was not a guaranteed way to insure death). If the initial report --- that $45 was found in his pocket --- is accurate, then robbery most likely would not have been a motive. Unless the robber miscalculated.

Any official records of the investigation into William's death that may have existed have vanished. There are no indications that anyone ever was charged in his death and newspaper reports are scant.

So, as Fox radio news is so fond of saying, "I report, you decide."

I have some history from Chariton and have been there to research some. My family is Eli Dismore and Lockard Dismore. I was wondering if anyone has personal knowledge of them and any stories? Thank You Carla Davis

My family from Chariton is Eli Dismore, Lockard Dismore. I have some history on them, but was wondering if anyone remembers them and has any stories? Thanks, Carla