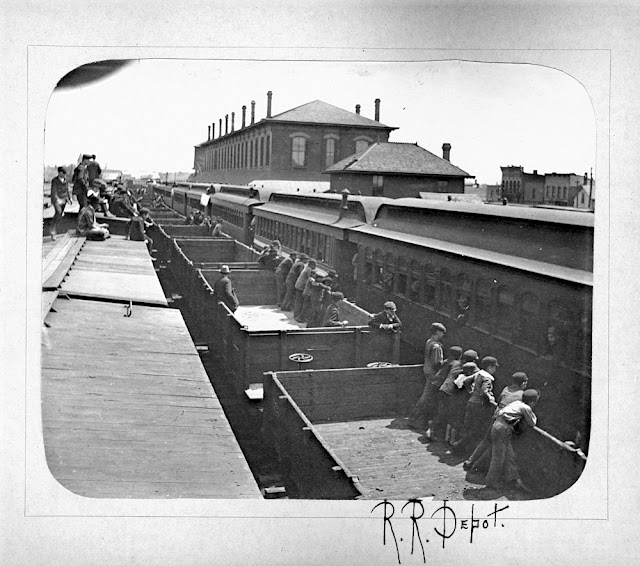 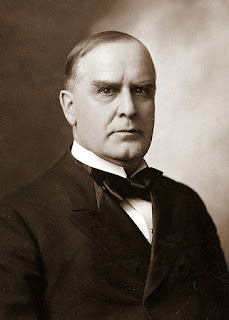 Alaska's Mount McKinley --- North America's highest peak --- officially reverted this week to its originial native name, Denali, a cause for rejoicing in Alaska and consternation in Ohio, home to its 20th Century namesake, President William McKinley.

For the record, the name "McKinley" first was applied to Denali during 1896 by enthusiastic backers of the gentleman from Ohio's Republican presidential campaign of that year, then made official in 1917.

Although our 25th president no longer has a mountain named in his honor, he still holds the distinction of being the first sitting president to visit Chariton --- on Thursday, Oct. 13, 1898, during the second year of his first term.

This very brief "whistle-stop" appearance drew a late-afternoon crowd estimated at 5,000 to the C.B.&Q. Depot. This is the only decent photo of the event that we have in the Lucas County Historical Society collection --- taken as the presidential train pulled in from the northwest along the east side of the depot where it was greeted by daring boys and men who had climbed into and on top of cars parked on sidetracks to get a better look. All the oratorical action, however, came a little later south of the depot where a reviewing stand had been set up.

The president was returning to Washington, D.C., from Omaha where he had addressed crowds at the Trans-Mississippi Exposition, also known as the Omaha Worlds Fair, on Wednesday, the 12th. He had delivered an address in Creston before the train continued on to Chariton and would address residents of Ottumwa during the early evening.

So far as world events were concerned, Spanish-American War hostilities has just ceased during August and negotiations that would formally end the war when the Treaty of Paris was signed  on Dec. 10 still were under way.

Here's the report of President McKinley's visit from The Chariton Patriot of Oct. 13.

Today the people of Chariton and Lucas county were given the greatest honor that is recognized by an American citizen --- that of seeing and being addressed by the President of the United States. On two other occasions our town has been honored by men who have been elected to the presidency --- U.S. Grant and Benjamin Harrison --- but Wm. McKinley is the first to visit us while occupying the Presidential chair. The appreciation of the people and their friendship for this great man was proven by the immense crowd which gathered at the depot to greet him. The people began collecting about two o'clock and by the time the presidential train arrived there were present about five thousand pushing and crowding to get where they could see and hear.

A temporary stand was erected in the center of the platform just south of the depot. This was carpeted with beautiful rugs and was decorated profusely with flags.

The Russell-Chariton band was on hand and entertained the crowd while they stood shivering in the cold wind, waiting for the train. It arrived about 3:40 o'clock.

As the train pulled in it was greeted with cheers and waving of flags by the school children, and the appearance of the President at the door of the car was the signal for more cheering. He was quickly escorted through the crowd to the platform by Col. W.S. Dungan and Dr. C.T. Brant, and introduced by the colonel.

As the President stepped forward the crowd again broke into enthusiastic cheers. He spoke but a few minutes, and in his remarks he spoke of his appreciation of the patriotism of Iowa people and of his pleasure in being greeted by so many, particularly by the school children, to whom he addressed a few words. His short talk was confined mainly to the valuable acquisitions of territory made by the United States over which he said the flag would wave as a surety of humane and prosperous government for the people. Concluding, he introduced Hon. Lyman J. Gage, Secretary of the Treasury. As the President gave way to Mr. Gage, he was preseted with a beautiful bouquet by little Marian Whitfield, the gift of the senior high school class.

Mr. Gage made a brief speech saying that he had the honor to preside over a department of the Government which rarely receives the popular plaudits of the people. The public applause greets the Army and Navy because their heroic actions stir the hearts of the masses. But behind Army and Navy --- behind soldiers and ships --- stands the Treasury, representing the resources and credit of our country, those material resources which make an army and navy possible. It is said a stream rises no higher than its source and therefore the Nation cannot rise higher than than of the great mass of the people ....

"The time for the departure of the train," said the conductor, and the great ovation to the President and his party remain only a proud memory to all who saw and heard him.

As the train pulled out President McKinley stood on the rear platform, bowing and waving his handkerchief in response to the farewells from the people along the track.

Other distinguished members of the party who occupied the platform besides the President and Mr. Gage were Secretary of Interior Bliss, Secretary of Agriculture Wilson, and Miss Wilson, Mrs. Gage and Postmaster General Smith.

Mrs. Jessie Thayer accompanied the party from Creston, where the President delivered a fine address, taking about fifteen minutes.

WHAT THE PRESIDENT SAID

"Fellow Citizens --- I do not think I ever appreciated fully the size and population of Iowa until my visit to your state. The vast assemblages which have so kindly greeted us everywhere on our journey have been very gratefully appreciated, as we meet the old and the young as they gather under the flag of the free and renew once more their devotion to their country.

"It gives me special pleasure to meet with the school children, the boys and girls; those whom in a little while must take up the trust that the older of us are carrying and carry forward their great work of American citizenship; for out of the school house in all our history have come the statesmen, the business men, the soldiers and the farmers that have done so much for this great country of ours. we have been very fortunate as a nation in the last six months. We have made much progress in a very little while. We have almost lost sight of the fact in talking of our war; we have acquired some territory, we have the beautiful islands of Hawaii that came to us free and independent (cheers) and asked to be annexed to the United States. Those lovely islands in the sea are now a part of the United States and I have no doubt that your teacher has told you all this and that they must soon appear in the new map of our country.

"My fellow citizens, wherever our flag floats, wherever we raise that standard of liberty, it is always for the benefit of humanity and the advancement of civilization. We do not go to war to acquire territory. Territory sometimes comes to us when we go to war in a holy cause, and whatever we may keep, the flag will float over it assuring peace and good government, and bring blessings to all those people.

"we have with us today the members of my official family and I suppose you would like to see and hear them, and with your permission I will introduce you to Lyman J. Gage, Secretary of the Treasury."

As footnote to the above, McKinley served out his first term, was re-elected, but then was assassinated by a deranged anarchist six months into his second term, during September of 1901.

Chariton would not see another sitting president up close and personal until September of 1948, when President Harry S. Truman made a whistle stop visit during the campaign of that year.

I wasn't around when President McKinley stopped in Chariton on October 13, 1898 but I was at that depot on September 13, 1948 to see President Truman when Chariton was scheduled for one of his famous "Whistlestop campaign" speeches. I was taken to Chariton by Jack Ryan whose wife Mabel clerked in my father's grocery store in Russell. I remember Mr. Ryan lifted me up to his shoulders (I was only eight years old) so I could see the President over the heads of the crowd. President Truman's wife Bess and daughter Margaret joined him on the rear platform of the train at the end of his speech. My older brother David "Dee" Wright took a few black and white snapshots of Harry, Bess and Margaret with his camera that day. A few years ago I gave those snapshots to my late brother's son who is a physician in Orlando.

I wonder if the Historical Society has photos taken when President Truman visited Chariton 67 years ago and if there is a copy of his speech to Lucas Countyans?

Hi Charles --- The society does have photos, but not the text of the speech.