Keep your tired, poor and homeless off my beach ... 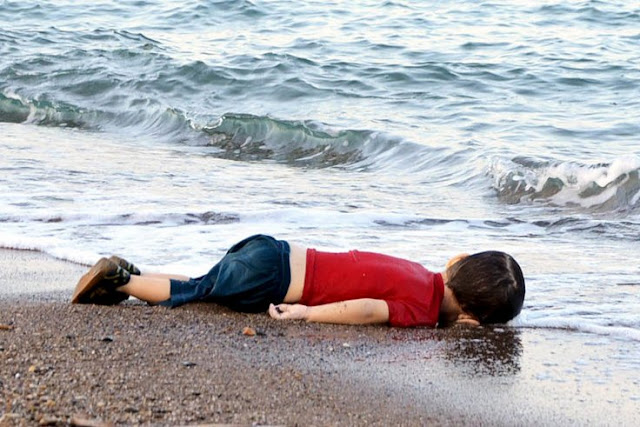 So far, Sen. Lindsey Graham (R-South Carolina) has been one of the few U.S. politicians to say anything that's resonated with me about the Syrian refugee situation, generally acknowledged as the greatest humanitarian crisis to face us collectively since World War II.

"We should take our fair share," Graham said a week ago Tuesday at the National Press Club.

Considering the current number of refugees admitted to the United States (about 1,500), "We should take down the Statue of Liberty and tear it down," Graham said. "This is our response as a nation, just tear it down. We don't mean it anymore."

Roughly 4 million refugees have fled the ongoing war in Syria, fiercer now as Western forces battle those of the Islamic State, and hundreds of thousands are pouring into Europe, many from Turkey, which has borne the brunt of the refugee flood.

Photos of a 3-year-old Kurdish child, Aylan Kurdi, have taken the media by storm. His body washed up on a Turkish beach after he and several others, including his mother and brother, drowned while attempting to reach a Greek island and the European Union beyond.

And Europe appears to be stepping up. Germany, for example, has established the goal of providing refuge to 800,000. Other nations have set lesser goals.

Some congressional Democrats have suggested that the U.S. admit 65,000. The U.S. Conference of Catholic Bishops believes 100,000 could be taken in with few difficulties.

And it will be interesting to see what Pope Francis has to say about U.S. refugee policies when he visits beginning Sept. 22. He has been encouraging Catholic families in Europe to open their homes to refugees.

I watched a little of the coverage of Mike Huckabee's rally for Kim Davis down in Kentucky yesterday during which a Huckabee aide reportedly elbowed Ted Cruz to prevent him from joining the former Arkansas governor in the glow cast by  Mrs. Davis's Christian martyrdom.

And got to wondering how that crowd would react if President Obama announced a conservative goal of opening U.S. doors to, let's say, 50,000 Syrian refugees.

It's unclear that anything of the sort will happen as the president ducks to dodge even more political bullets. And it's only fair to point out that the U.S. has provided $4.1 billion in humanitarian aid since the Syrian crisis began.

But can you imagine how those folks in Kentucky and their counterparts elsewhere would react?

Not only are most of the refugees Muslim (although there are Christians and other minority groups mixed in)  --- they've got darker skin, dark hair and dark eyes. My goodness.

I liked what blogger Benjamin L. Corey had to say about the odd contrast between Protestant Evangelical preoccupations and actual crisis situations. You can read it here.

If only the world refugee problem was as easily solved as you make it out to be. The United States has been extremely generous over the years accepting refugees. I'm sure we will accept our share of Syrians this time too, so I see no reason for your snarky comments plus racist remarks concerning skin color. My question is who will be left in Syria to rid the country of the thugs.