Face to Face with a hero: Lyle H. Morris 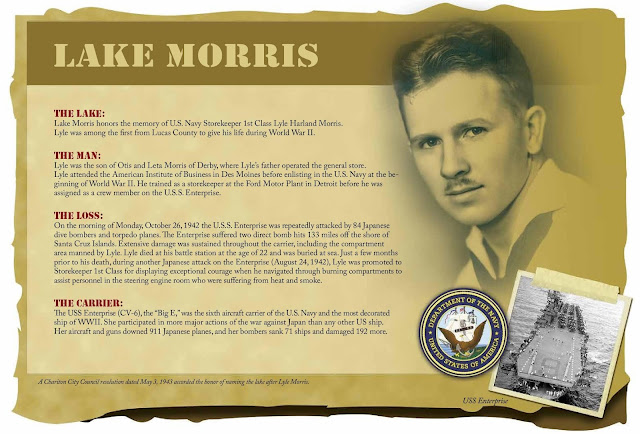 It makes me really happy to report that, come September, visitors to Chariton's Lake Morris will be able to come face to face with the man whose name it bears, U.S. Navy Storekeeper 1st Class Lyle H. Morris, of Derby, and learn more about him.

Lyle, 22, died on October 26, 1942, at his battle station aboard the carrier U.S.S. Enterprise, then under attack by Japanese forces off the Santa Cruz Islands, and was buried at sea. He had been honored during the August preceding for courage demonstrated in an earlier Japanese assault.

Lyle was among the first Lucas Countyans to die during World War II and, in 1943, the Chariton City Council named a new lake known until then as "East Lake" in his honor. At the same time, they named the other "twin" lake --- sources of Chariton's water supply --- Lake Ellis in honor of U.S. Army Air Forces Staff Sgt. Roy Ellis, of Williamson, who died on June 11, 1942, when his B-24 Bomber was shot down in the Aleutian Islands off Alaska.

The commemorative sign that honors Morris will be placed at Lake Morris's north shore access during a program scheduled for 4 p.m. Friday, Sept. 11. All will be welcome to attend.

Both Don Evans, Lyle's nephew, who lives on the Micronesian island of Yap in the southwest Pacific and is the prime mover behind the sign project, and Patrick Ranfranz of Wisconsin, founder of the Missing Air Crew project, will be present.

The Morris family, led by Don, funded the project and Ranfranz aided in research, then took the lead in design and production. He and his wife, Cherie, will drive the sign down from Wisconsin on the 11th. Don will arrive in Humeston, his hometown, earlier in the week. He is a son of the late Harold and Flora (Morris) Evans. Lyle's brother, Dale, now 89, still is living --- in Oregon --- but will be unable to attend. Other family members will be there, however.

As part of the Lake Morris project, Don and Pat also produced the design for a similar sign honoring Roy Ellis. But that is a project that would need separate funding in order to be realized.

Don and Pat, who have worked as a team on this, became acquainted through Pat's work with the Missing Air Crew Project, which he founded to search for his missing uncle, T/Sgt. John R. McCullough, one of 10 "Coleman Crew" members shot down by a Japanese fighter over Yap Island on June 25, 1944.

The project expanded to research, document, memorialize and locate all Americans missing in action near Yap Island --- hundreds of men assigned to 35 planes. The sign that will be placed at Lake Morris is patterned after interpretive signs placed on Yap as part of that project. You can read more about this project here. 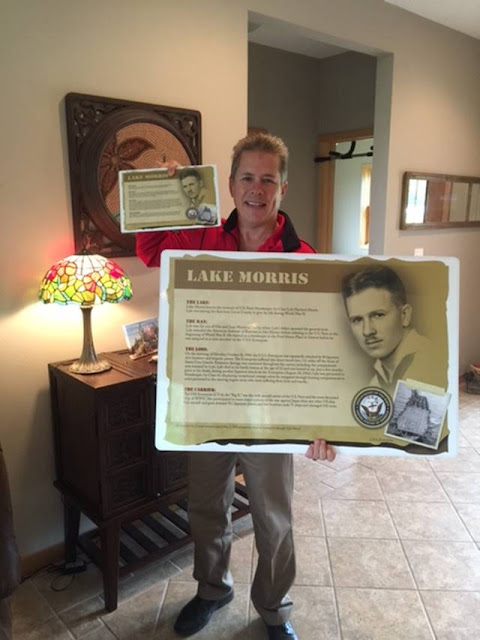 And here's Pat, holding the sign that soon will be installed east of Chariton.