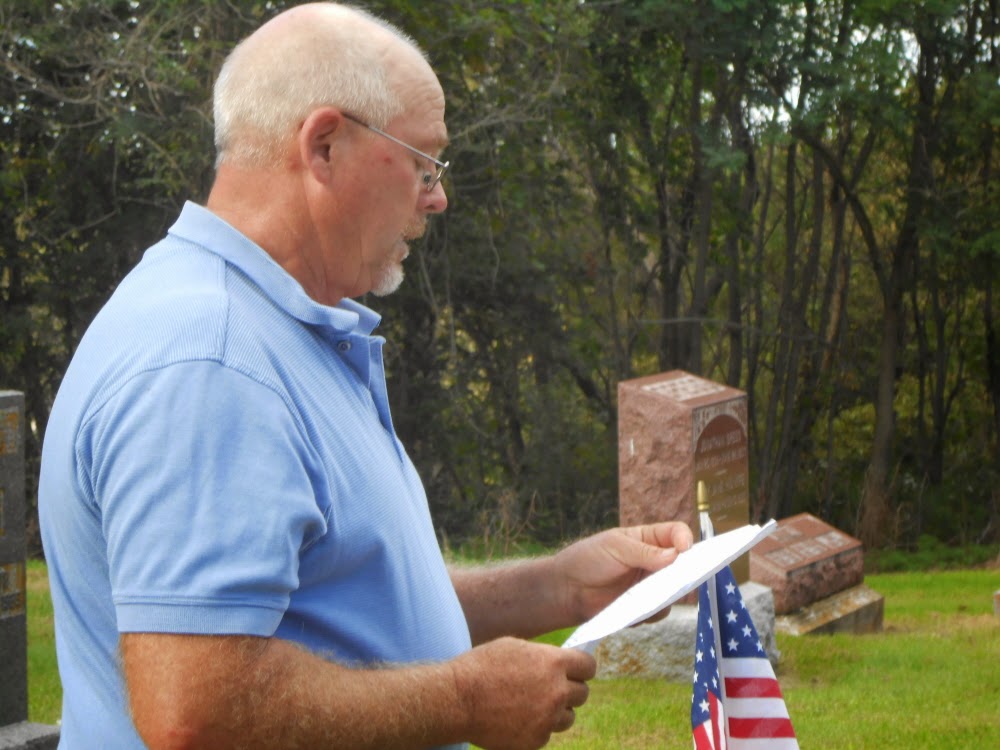 Henry F. McCollough and his father-in-law, William D. Junkin, built the Hotel Charitone during 1922-23 and managed it personally through 1930. Although the two men and their families left Chariton during 1931 and resettled in Brainerd, Minn., Henry and Louise McCollough chose to be returned to Chariton for burial many years later.

Dave Kuball portrayed Henry McCollough during Sunday's 11th annual Chariton Cemetery Heritage Tour. Here's the script that was the basis for his presentation. 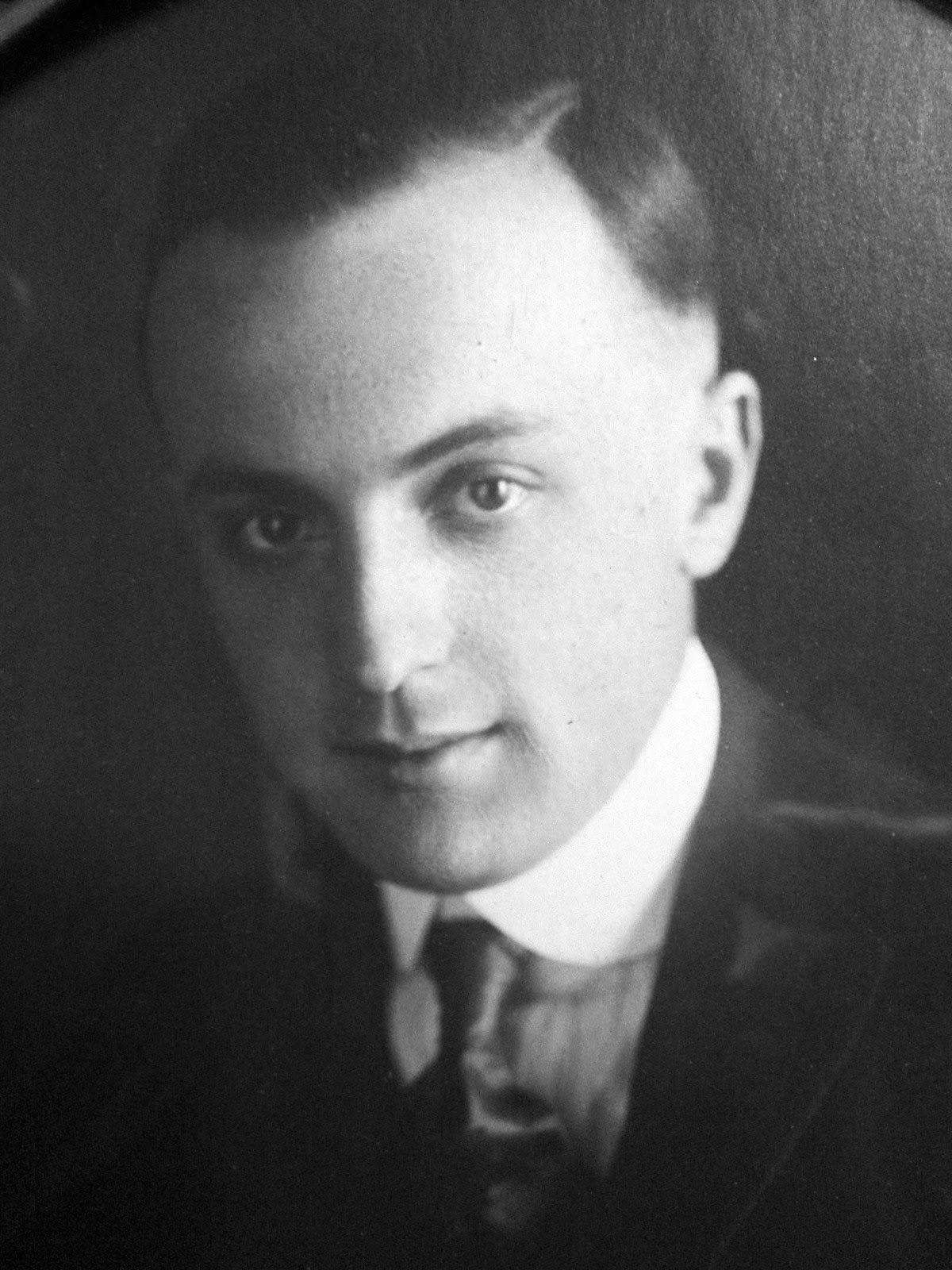 My name is Henry Ferree McCollough --- the “McCollough” in the partnership Junkin & McCollough that built the Hotel Charitone in 1923. My father-in-law, William D. Junkin, and I sold the business seven years later, so our names may not be too familiar.

But my roots go deep in Chariton. Dr. William H. Gibbon, Civil War surgeon and pioneer Chariton physician and druggist, was my grandfather; his only child, Anna, my mother. I grew up in the biggest house on South Grand, the one with the “G” for Gibbon high in its gables.

Anna married Ralph McCollough, associated with his parents in a dry goods store, during 1884 and I was the third and youngest of their children, born July 24, 1891, and only 3 when my father died in 1894. Two years later, Anna married attorney and banker Josiah C. Copeland, and they became the parents of my three Copeland half-siblings. He was mayor of Chariton when he died in 1916.

I graduated from Chariton High School with the class of 1908 and that fall, enrolled in business courses at what now is called the University of Iowa, in Iowa City.

I completed two years in Iowa City, then at loose ends came home to work in the family drug store, managed by my older brother, Clement McCollough. It was a shock to all of us when he died suddenly at age 27 during September of 1912. I agreed to co-manage the store and, when it was sold, went to work for my stepfather as a junior clerk at his family bank, Chariton National, on the west side of the square.

During August of 1917, as World War I accelerated, I enlisted for service, was accepted in the Aviation Corps and assigned to ground school in Urbana, Illinois.

Louise Junkin, daughter of William D. and Vermont Junkin --- he was editor and publisher of the Chariton Herald-Patriot --- and I had decided that we would marry before I enlisted, then because of the uncertainty of war decided to do so July of 1918, just before I left for flight school in El Paso, Texas. Born in Fairfield, where the Junkins were a pioneer newspaper family, she had moved to Chariton six years earlier when her father bought controlling interest in the Patriot, then acquired the Herald.

Commissioned a lieutenant, I was only days away from deployment to Europe when World War I ended, so returned to Chariton and rejoined the bank staff --- and became a charter member of Carl L. Caviness American Legion Post No. 102, serving as its financial officer.

The 1916 death of my stepfather compounded estate complexities that developed when his brother, Howard, died five years earlier, so the decision was made to merge Chariton National and Lucas County National banks. The latter had been formed in 1908 by Eikenberry and other interests after the Mallory bank crashed. When it became clear I would not have a job in the merged bank, Louise and I bought a dry-cleaning business in Albia and moved there.

This was not satisfactory, however, and my father-in-law was getting restless, too, after years in the newspaper business. The great opportunity in Chariton during 1922 was in the hotel business. Chariton was booming because of agriculture and coal, it was a transportation hub and the hotels were 50 years old and deteriorating. Only money and imagination were needed.

My father-in-law sold a major share of his interest in the Chariton newspapers and I sold my business and threw other family money into the pot and we came up enough cash to build the Charitone. We signed on as architect William Lee Perkins, who had designed the Chariton Newspapers building for my in-laws in 1917 --- and were off and running.

The Charitone opened its doors to the public on Saturday, Nov. 3, 1923, and began accepting guests the following Monday. We celebrated with family and friends during a giant overnight “house party” that Saturday and when our friends departed on Sunday, they filled the hotel cash register for the first time.

From 1923 through 1930, both the McCollough and Junkin families lived in hotel apartments and managed the business personally. By now, Louise and I had two children, William and Katherine. And the business was very prosperous.

But Bill Junkin’s heart still was in the newspaper business and we were open to other options, too. So in late 1930, we began negotiating sale of the hotel furniture and fixtures and a long-term lease on the building with O.A. Clark, then operating hotels in Albia and Fairfield.

Using the proceeds of that deal as our stake, we bought jointly into the Brainerd Daily Dispatch, in northern Minnesota, and pulled up stakes in Chariton during 1931 and headed north.

Louise and I handled the business end of the operation and Bill Junkin served as publisher until his death during 1941, then I became publisher. Louise still was serving as treasurer of the family corporation at the time of her death during 1974 at age 80.

I died six years later, on Nov. 15, 1980, still co-publisher at age 89. Although we had many happy years in Minnesota, both Louise and I wished to be buried in Chariton near my family, just across the driveway here to the east.
Posted by Frank D. Myers at 4:50 AM

I am William A. McCollough, grandson of Henry F McCollough. I would like to make two corrections to this otherwise well written account of my grandfather's life. First: He was not born on July 24, 1891, he was born January 24, 1891. Second: His wife Louise (my grandmother) is not buried in Chariton. She is buried along side her parents (the W. W. Junkins)in the cemetery in Fairfield, Iowa.