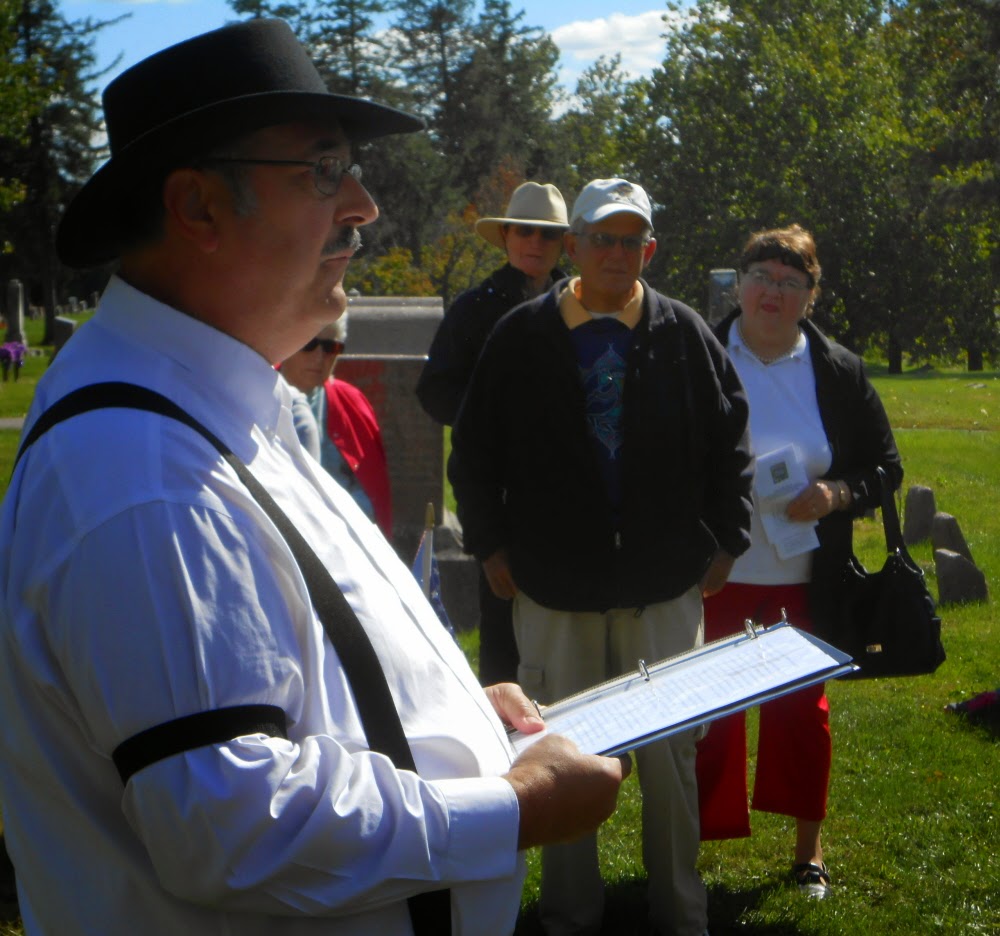 Here's the script that was the basis for Larry's presentation:

The “S.B.” on this tombstone that marks the graves of all my family, save one, stands for Samuel B., and I’m here to represent both myself and my father, Bartholomew Royal St. John. The St. John House, Chariton’s first real hotel, was ours and I aim to tell you a little about it.

I was an honest man and nearly everyone liked me, but to be truthful I wasn’t a good manager. So there was never enough money to put up tombstones here as my wife and children died. This stone was put up by my last surviving daughter, Lounette, a long-time Des Moines school teacher, before she died in 1954. She’s buried here, too. Others are my wife, Mary, an infant, our adult son Frank and daughters Mary Alice and Emily.

My dad was born during 1807 in New York and married Polly Spears there about 1830. They came west to Ohio, where I was was born in 1831. Three other children followed before our mother died and Pa brought us west to Jefferson County. Iowa. He was 42 when he married 19-year-old Emily Prather there during 1849 and they went on to have eight more children.

I married Mary Wilson during 1853 at Libertyville in Jefferson County and farmed near there until the fall of 1858, when we moved to Chariton, too.

Pa and Emily and the younger children had arrived in Lucas County by ox-drawn wagon during the early 1850s and settled first at Ragtown, southeast of here in Benton Township and named for our neighbor Amos Ragsdale. Pa and Emily operated the St. John Tavern in their cabin for a year or two there before moving on into Chariton.

Ed Culbertson built what became the St. John House during the summer of 1853 on the south side of the square --- Hammer Medical Supply stands there now. It was the first two-story frame building in town, built mostly with native lumber sawn at the only mill then operating in Lucas County, some 10 miles northwest on White Breast Creek. All the finish lumber came overland from Burlington in ox-drawn wagons.

Dad bought the building on Nov. 5, 1855, and named it the St. John House, fairly well putting out of business the little inn that the Henry Allens had been operating since 1850 in a double log house little more than a half block east.

Life with Pa was always an adventure, and he got himself in hot water politically just a year after arriving. He was a fierce abolitionist and therefore a Republican in a town where there were many Democrats, not necessarily in favor of slavery but opposed to forced abolition. Dad threw himself into the campaign for Republican John C. Fremont so enthusiastically that Democrats who backed James Buchanan burned him in effigy.

Buchanan won, however, and everyone got over their political differences and backed the Union cause. When the Boys of 1861 --- the first company of volunteers raised in Lucas and Clarke counties and known as the Lucas County Guards --- mustered and marched off to war under the command of Capt. Daniel Iseminger on July 8, 1861, the farewell ceremonies were held in front of the St. John House and the orators stood on our front porch. Capt. Iseminger, who had been our mayor, accepted a flag there sewn by the women of Chariton that later would be carried into battle. He and some of these 80 or so boys died at Shiloh the next April.

Dad left the St. John House in my hands when after the war he and Emily moved on to Madison County, where he farmed until his death in 1884. But Mary and I lost it to foreclosure during early 1868. As I said, I wasn’t a good manager.

I tried my hand at the hotel business a few times after that, first as manager of the newer Hatcher House on the southwest corner of the square --- built in 1856. Then, in 1877-78, I leased the hotel on what’s now the Charitone corner from Jimmy Gallagher and operated it as the new St. John House. Rooms were a dollar a day. But that didn’t work out either.

Mostly I worked as a drayman during the remainder of my years in Chariton, hauling freight from the depot to its destination and moving merchandise, household goods and other items around town behind a team of horses.

Calamity hit again in early 1887 when one of my team of horses died, endangering our livelihood. You can imagine how grateful I was when Chariton businesspeople took up a collection around the square and bought a new horse for me.

1894 was a terrible year. My son, Frank, and my daughters Mary Alice and Jessie (Jessie lived in Decorah), died within months of each other. But we made it through that, too.

In 1897, I moved to Des Moines with my two surviving daughters, Emily and Lounette, and we built a good life there again, Lounette teaching school and Emily working as a dress-maker.

I died at 74, sitting in my favorite chair, on Feb. 8, 1905, and my remains were brought home to Chariton for a funeral at First Methodist Church and burial here with my family.
Posted by Frank D. Myers at 6:02 AM