It's been chili (but the Chargers have been hot) 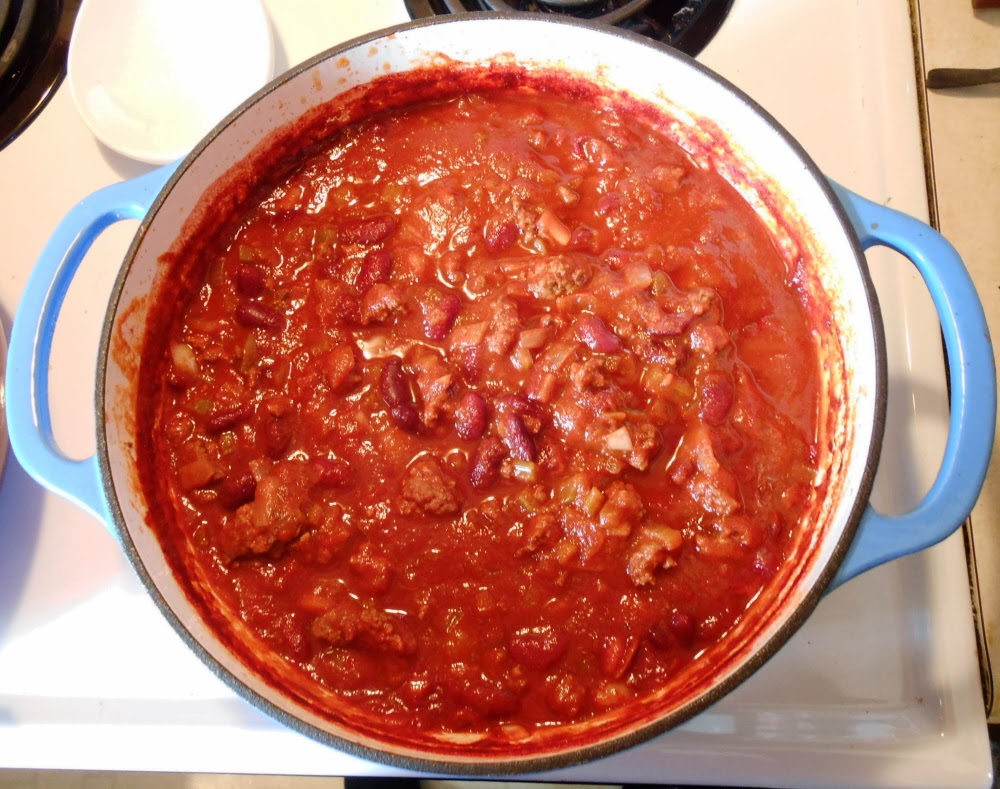 Chariton's boys defeated Bondurant-Farrar 63-61 in Ankeny last night to qualify for state tournament play, so it seemed like a good morning for red. Even if it's only soup.

The guys are scheduled to face Dubuque Wahlert in preliminary rounds at 2 p.m. next Tuesday --- and I'll still be eating the same batch of chili, one of the hazards of living alone. Fortunately, I like chili.

Some would say this is not "real" chili; I say, we're not in Texas, Dorothy. I want hamburger, a controlled degree of hotness and dark red kidney beans. This is Iowa.

Nor is this an old family recipe --- unless you consider the Internet old family. And a couple of cautions: Watch the cayenne, unless you do like it hot; and generic brands of tomato juice and sauce are not necessarily created equal. On the other hand, ground chuck tastes better than ground round or something leaner.

So here's the recipe:

Sautee the chopped vegetables in olive oil until softened a little, then place in your soup pot (mine is a big dutch oven); brown the ground beef, drain and add to the vegetables; add the remainder of the ingredients; and mix well.

Bring soup to a boil, then reduce heat to a simmer. Cook at least an hour and a half to the edible point, but longer is better.

Since nearly everyone --- other than me, Kris and a few city officials --- was in Ankeny last night for the big game, I was sent in as second string to deliver a brief Chamber Main Street report at the city council meeting.

While supportive, I'm not a sports fan. Don't get snippy about this. I don't expect you to attend choral evensong at the Cathedral, something I am a fan of. Different strokes, as they used to say.

Anyhow, it had to be one of the shortest meetings on record --- about half an hour. I was going to leave right after the report, but the speed at which the council was moving was so dazzling I just sat there stunned.

It was good to see Joe Gaa sworn in as Chariton's new city manager. We lost the estimable Corey Goodenow earlier this year to the bright lights, tulips and S-cookies of Pella. Joe comes to us from Woodbine, where he's been working as city administrator.

Finally, happy Mardi Gras! If we were in New Orleans, this would be a big day.

As it is, you-all are invited to a Shrove Tuesday pancake supper from 5 to 7 p.m. at St. Andrew's to benefit the Interchurch Council's food pantry. In cooperation with our Girl Scouts we'll serve pancakes, sausage, fruit, juice and coffee in return for free-will donations.