What it was was football 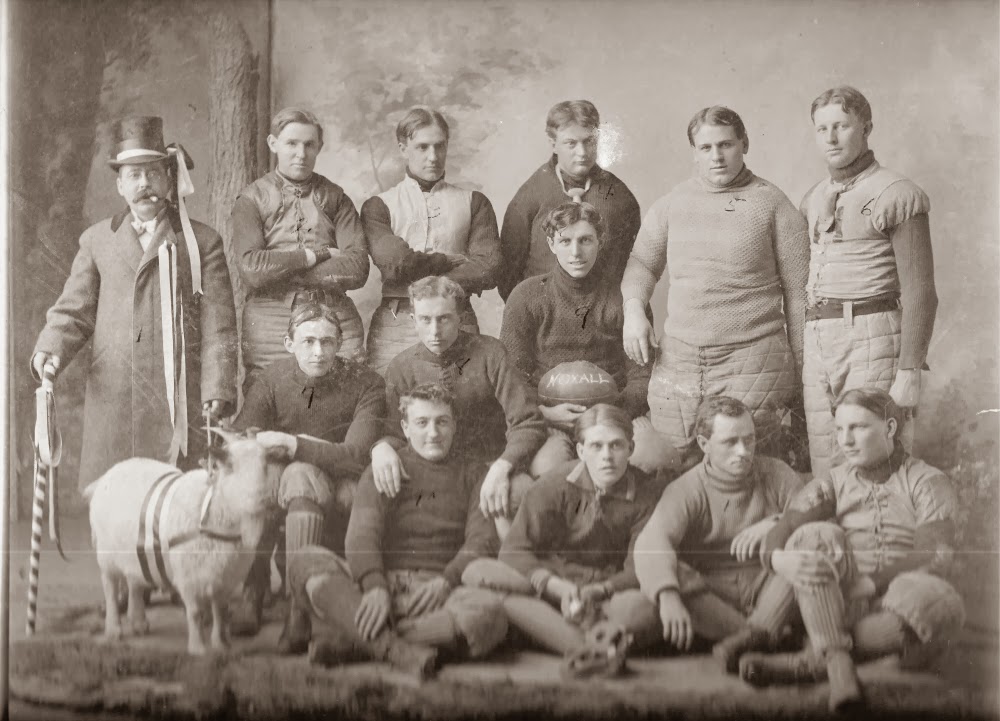 What with all the talk about professional football this week, it seems like a good time to haul out this photo of one of Chariton's most spectacular non-professional teams, fielded by the Noxall Club for an exhibition game on Thanksgiving Day, 1901.

When all was said and done, the Noxall boys were soundly defeated 16-0 by the Charitons, composed of young men whose principal qualification was the fact they weren't members of the Noxall Club.

There's no particular mystery about why the game was played --- it was a lark and provided entertainment for several hundred Lucas Countyans on a holiday afternoon. But a little background about the Noxalls may be in order.

In 1895, when 13 young --- in their 20s --- and single business and professional men founded it, there was no respectable social outlet for young men in Chariton. Most still lived with their parents or boarded in single rooms. Older men had the various lodges, ranging from Masonic to Pythian, but those must have seemed a little boring --- and a lodge meeting was not designed for courtship. Women of all ages had an elaborate network of social clubs and fraternal auxiliaries, plus church, and so were much better provided for.

The Noxalls rented rooms first upstairs in the new Eikenberry Block on the southeast corner of the square, then a few months later leased the entire third floor of the Mallory Opera Block on the northwest corner of the square (a long and relatively narrow high-ceilinged area overlooking the square and fronting the two-story opera house auditorium to the west). These new club rooms included a 30-by-50-foot ballroom and smaller rooms for reading, playing cards, entertaining and socializing.

Noxall members and their male guests stopped in here frequently to read the newspapers, converse, socialize with each other --- and smoke (if alcohol was served, the service was very discreet). There also was an elaborate social calendar as the Noxalls hosted dances, receptions, luncheons and smaller-scale entertainments for their friends, families --- and the young women they were courting, or hoped to court. Women who needed a meeting place often were invited to use the club rooms, too.

The emphasis changed in 1902 when the Noxall Club invited older married men to join, moved to shiny new and larger quarters a block north and turned itself into what was in effect Chariton's first Chamber of Commerce. After that its members, often working with the Chariton Improvement Association (a group of high-minded and powerful Chariton women), focused on moving the city forward.

In 1901, however, when the big Thanksgiving Day game was played, the principal focus still was on having well-mannered fun. Here's a report, from The Chariton Herald of Dec. 5, 1901, of the big game:

CHARITON vs. NOXALLS
Thanksgiving Game Results in a Victory for Chariton Team, 16 to 0

The Chariton football team played the Noxall Club team on last Thursday afternoon, at Springlake Park, before an audience of several hundred people. The game was very interesting and closely contested, the Chariton team coming out winners by a score of 16 to 0. The game, which attracted more attention than any other ever played in Chariton, is described as follows:

Captain Jackson of the Noxalls won the toss and chose to defend the south goal.

Immediately the players scattered to their places and Captain Hickman of the Charitons kicked off.

For the next few minutes the play was rapid and furious, and the Noxall boys fairly walked down the field, forcing the Chariton team in front of them.

At Chariton's 5 yard line a disastrous fumble by the Noxall boys lost them the ball and introduced discouragement to their anticipations of a touchdown.

Failing to make ground on line-smashing, Chariton tried a punt, but punted short and out of bounds. The ball was returned by full-back Kridelbaugh of the Noxall team and play resumed.

Noxall lost the ball again on a called offside and the ball went to Chariton. The signal was given for an end-run and Anderson, helped along by magnificent interference, broke away across a practically clear field and made a touchdown after a beautiful run from the 25 yard line.

Time was called on first half with score as above.

After ten minutes between halves for rest, play was again called with Jackson kicking off.

Injuries to some of the men, together with lack of practice, took some of the ginger out of the Noxall boys, but their defense of the line was a heroic effort and allowed but small gains through the line.

Chariton having become convinced of the futility of line-bucking, signaled for a trick-end play.

Chariton's big center passed the ball to quarter-back, "Midget" Hickman, who passed it to the fullback, who in turn passed it back to Hickman. The interference was quickly and effectually formed and swung around Noxall's right end, clearing the field and allowing the Midget to run down the west line for a touchdown. It was a beautiful play and resulted in a score, but was criticized by the Noxall team on the grounds of a forward pass by Dalin, but Referee Copeland refused to recognize it.

The same play was attempted several times and once more resulted in a touchdown.

The game throughout was intensely interesting and was characterized by brilliant work on both sides.

The Noxall team seemed to have the better individual team but was lacking in teamwork and practice.

Chariton had the advantage of teamwork and practice, hence played the better game.

There were many features to the game, the hard and continuous, successful tackling of left-end Perry, the long and beautiful runs of Anderson and Johnson, the plucky little Midget's end runs, the line smashing of Jackson and Guthrie, and the line work of the Noxall team. Goldsberry at quarter played a heady game and did some fine work.

When the field had been cleared and the ambulance hauled away the remains, the cause of death was announced, 16-0.

In case you wondered about the game location, Spring Lake Park, this was a public park developed during the late 1890s around a newly-built pond in the area east of the Chariton Cemetery now bounded on the west by Highway 14 and on the north by Highway 34. It flourished briefly, until the new Rock Island line was built through it, then was abandoned as a park and the land used for other purposes.

My granddad had Andy's version on an old-fasioned pre-vinyl, playable on the Victrola. Sorry we let both get away.

Frank - do you have the full names of the 'Chariton' team? I have a great uncle named Glenn Anderson (married to Dale Seward Anderson) about the right age to have participated - just curious… Thanks for consistently providing some of the most interesting reading around.

I'm sorry to say I don't, but will be looking next week for a photo of the "Charitons" and might find more information if and when I do.