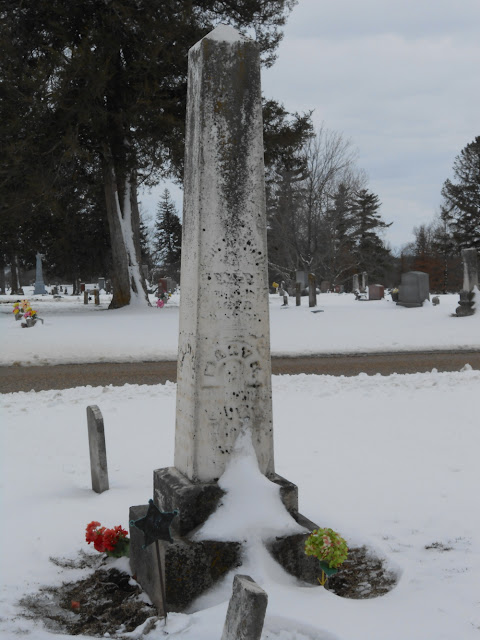 The weathered marble obelisk here marks the grave of, among others, Henry Younkin --- the third (known) veteran of the War of 1812 buried in the Chariton Cemetery. I wrote a little yesterday about another, Caleb Proctor, and way back in 2005, about Samuel Walthall. It took a little more digging to come up with Henry, and it is possible that there are more --- but that's a project for another day.

Spring's here, but that's snow you see --- I ran out to the cemetery Monday afternoon to take this. It should all be gone by the end of the week and highs in the 50s are predicted.

This is a good old boys group (women need not apply, although there is a counterpart for females). Still, the site is interesting and informative.

It lists three War of 1812 vets in addition to Walthall (and the links here lead to their Find-A-Grave memorial pages): Nathaniel Goltry at Lagrange, Aaron Kendall at Greenville and Isaac Renfro at Brownlee. Now back to Henry.

Henry Younkin arrived in Chariton rather late in life. His son, Charles H. Younkin, had opened a book and stationery store in Chariton during the mid-1860s, coming here from Cambria in Wayne County, where he had taught school.  During 1867, Charles brought Henry and his two maiden sisters, Caroline and Mary, to Lucas County from Fairfield, where they had lived previously. Henry was by trade a tailor; Caroline and Mary, milliners.

Henry died in Chariton during June of 1877. Obituaries at that time tended to be brief primarily because all type had to be hand set. The Patriot of June 20, 1877, carried this brief notice under "Deaths":

"The deceased was a Virginian by birth, but at an early age removed to Ohio, where he lived until eleven years ago, when he removed to Iowa. His children number ten, six living and four dead."

No mention was made of his service in the obituary, nor have I been able to find any record of it during a quick search. That is not unusual when War of 1812 service is involved.  However, it was widely acknowledged both in Chariton and among family members.

Memorial Day used to be a huge event in Chariton, and on May 28, 1903, The Chariton Herald's front page featured a two-column display from top to bottom honoring "Our War Heroes" and stating that "The following soldiers are buried in the Chariton Cemetery and their graves will be decorated on next Saturday in the order found below." Seventy-eight veteran names then were listed, most from the Civil War.

Among the names listed were those of Henry Younkin and Caleb Proctor, both "War of 1812." Samuel Walthall's remains would not be moved from the pioneer Douglass Cemetery into the Chariton Cemetery until 1916.

A Grand Army of the Republic flag holder remains near Henry's grave --- the only type of flag holder available at that time. It has never been replaced by a War of 1812 holder.

When Henry's daughter, Mary, died during 1922, her obituary (Herald-Patriot of May 25) contained the following sentence, "She came to Chariton with her father, Henry Younkin, a veteran of the war of 1812, and her sister, Caroline, in 1867."

Family researchers have identified Henry as the third son of Rudolph and Elizabeth (Hockman) Younkin, native Pennsylvanians who apparently passed through Virginia before arriving in Perry County, Ohio, prior to 1830. Henry married Sarah Ann Bartlett in Muskingum County, Ohio, on Feb. 15, 1821, and all 10 of their children were born there. Sarah died at Zanesville during August, 1846, and Henry and all but one of his surviving children still were living in Muskingum County when the 1850 federal census was taken.

It seems likely that Henry served in a Virginia militia unit during the War of 1812, although Ohio is a possibility. Further research might turn up some record of this.

Of the six Younkin children who lived to become adults, Caroline (born ca. 1824) apparently was the eldest. She worked with her sister, Mary, as a milliner in Chariton until her death during 1891 and was buried near her father in the Chariton Cemetery. She did not marry.

Robert, born Feb. 17, 1826, was the second child. According to his obituary, "for a number of years he worked with a government surveying corps and traveled over a large portion of the United States." He joined his family in Chariton soon after 1870, when in his early 40s, perhaps because of failing eyesight. He soon became entirely blind and spent the remainder of his years in Chariton, dying during March of 1896. He is buried elsewhere in the Chariton Cemetery with his sister, Mary. Robert did not marry.

Elizabeth, born ca. 1832, was the third child and I've not tracked her down. I believe she married and moved to Fairfield in Jefferson County, but need to look into that a little farther.

The fourth child was Hester Ann, born during 1835. She married Sanford M. Boling on Jan. 17, 1865, in Fairfield not long after he returned from Civil War service. Sanford was a Fairfield businessman and veteran of the Iowa Senate when he died at Fairfield on Oct. 18, 1893, just short of 60. Hester brought his body to the Chariton Cemetery for burial, then moved here herself with their daughter, Bess. Hester died during 1927 and Bess (Milliken), during 1936. Both are buried with Sanford.

Mary, born June 22, 1839, was the youngest of the Younkin children. She worked as a milliner in Chariton, making her home until death with her sister, Hester Boling. Mary died May 19, 1922, and was buried near her brother, Robert, in the Chariton Cemetery.
Posted by Frank D. Myers at 6:10 AM