How many War of 1812 veterans would it take? 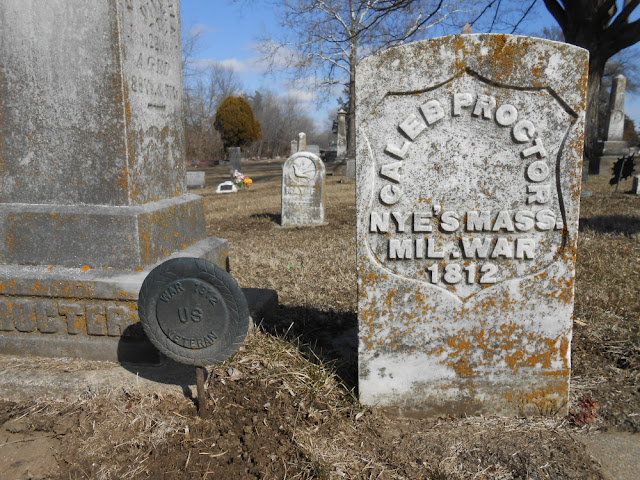 Conversation in the genealogy room turned to War of 1812 veterans the other day and, before it started to snow, I hurried out to the cemetery to take a picture of Caleb Proctor's War of 1812 tombstone. There are at least two War of 1812 vets out there. You can find out more about another one, Samuel Walthall, here.

The problem is, we really don't know how many War of 1812 veterans there are in Lucas County --- mostly because they don't get no respect, as they say, so no one's ever bothered to find out.

Back in the day, when Daughters of the American Revolution sailed stately through the land, the premium was on, as might be expected, Revolutionary War ancestors. Revolutionary bones always have been highly prized in Iowa, which didn't become a state until 70 years after that war,

No doubt there was considerable hand-wringing within Chariton's Old Thirteen Chapter, D.A.R., when Monroe County snapped up William Crockett, the old revolutionary who could have been ours, dug up bones south of Albia that allegedly were his and planted them under a big boulder in that city's Oak View Cemetery.

I'm trying to figure now how many War of 1812 veterans one of those fortunate counties that has two or three would take in trade for a set of more exalted patriotic bones. In the mean time, we'll just have to do with who we've got.

Crockett kinfolk have twisted themselves into all sorts of odd shapes over the years trying to explain how these four Crocketts were related. Personally, I think William Jr. and Susannah were siblings, rather than husband and wife, both children of William Sr. Who Nancy was I can't say, but do point a shaming finger toward those who have added 10 years to her age to make her fit in more conveniently as another daughter of the old man.

Somehow or another --- or so we have been told --- what was left of the senior William ended up in Monroe County --- he either was taken there to die or was removed from Lucas County feet-first, then snatched from his original resting place once it was located by those wiley Albia Daughters in the 1920s. William Jr., Susannah and Nancy had moved on from Lucas to Decatur county by 1856.

Considerably more is known about Caleb Proctor. He was born Aug. 4, 1795, in Fairhaven, Massachusetts, according to his obituary, and did indeed serve as a private in Capt. William Nye's company of Fairhaven infantry "in defence of our seacoast" during the summer of 1814 at New Bedford. He would have been 19 at the time. Both his obituary and official records show that late in life, when pensions were granted, he received one for disabilities incurred during that service.

By trade, Caleb was a mariner. According to his obituary, he "followed a sea-faring life twenty-five years, commanding a vessel most of the time." During his last years (1857-1884) in Chariton, he always was known as "Capt. Proctor."

On Aug. 24, 1834, when he was nearly 40, Caleb married Myra Sampson, 25, at Middleborough, Mass. They became the parents of four daughters, Eliza S., Susannah S., Abby K., and Myra S., before moving during 1849 to Berea, Ohio, now a western suburb of Cleveland, Cuyahoga County. They were charter members there of First Congregational Church. Daughter Myra died at Berea at age 4 on Aug. 31, 1849, and is buried in Adams Street Cemetery.

During 1857, Caleb and Myra along with Abby accompanied their daughter and son-in-law, Susannah and Isaac Kneeland, west to Chariton. Kneeland, a physician, dispatched two of the Proctor daughters who now would be considered shockingly young in his quest for heirs.

Isaac, age 32, married Eliza S. Proctor, then 15, on Oct. 12, 1851, in Cuyahoga County. She died at Berea on Aug. 17, 1852, of complications following the birth of a daughter, who survived. Almost immediately, Isaac married the second Proctor daughter, Susannah, also 15. She produced three surviving sons before dying in Chariton after giving birth to twin daughters during December of 1862.

A year later, on Oct. 7, 1863, Isaac married a 24-year-old widow, Eleanor M. (Brooks) Crawford, and by her had four additional children. After practicing medicine in Chariton for about 20 years, the Kneelands moved to Burr Oak, Kansas, where he died during 1886. Eleanor outlived him by 30 years, dying during 1917 in Oregon. The bodies of both Isaac and Eleanor were returned to Chariton for burial.

The Proctors' youngest surviving daughter, Abby Kingman Proctor, married Warren S. Dungan at Chariton on April 3, 1859. Dungan, an attorney, became one of Chariton's most prominent citizens, serving both in the state Legislature and as lieutenant governor.

Abby gave birth to seven children, but became critically ill when about 40 and died two years later, of "paralysis" and pneumonia, on Sept. 21, 1881.

Having outlived his children, Caleb Proctor died at Chariton on Jan. 22, 1884, age 89. He was, according to his obituary, "held in universal respect for the sterling integrity of his character, that he was a just and honest man is his highest and most eloquent eulogy."