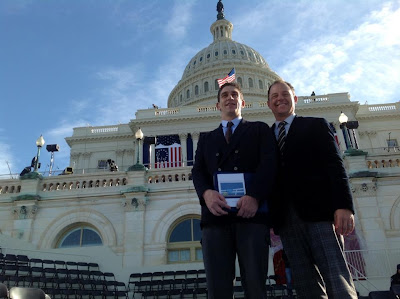 After Monday's inaugural, my friend wrote --- "At 13, I went to the Chariton public library and looked up the word homosexual in the childrens dictionary. It told me if someone tried to touch me to run and tell an adult. Television told me I was a freak. Church told me I was an abomination. Police arrested people like me. I got ridiculed by my classmates. I learned how to hate myself."

That was the introduction to a paragraph explaining why the President's speech had moved him, as it did all of us in the LGBT universe. But I copied this part out because, golly, me too --- so far as that dictionary business was concerned. I wonder how many of the rest of us started to figure out who we were by looking ourselves up. There was no one safe to ask (you knew that instinctively), no one to look up to and the instruction manuals parents receive with heterosexual children weren't working.

Which is part of the reason I thought inaugural poet Richard Blanco's appearance on the inaugural stand Monday was important, too. I mean what mama could fail to see this guy --- confident, handsome, well-spoken, so damn "normal" --- and filled with poetry, too --- as ideal husband material for a son. And what gay son, not see something worthy of aspiring to.

We didn't have role models back in the old days. I'm glad today's gay kids have them in increasing numbers.

Lesbian daughters will have to speak for themselves because I can't. Sometimes straight folks fail to understand that, although generally congenial and supportive, gay men and gay women in relation to each other are like Iowa and Minnesota --- states with similar cultures and a common border, but  distinct.

Some of us had fairly good luck growing up, and others didn't. My parents were bemused and  confused by what had been delivered, but never seemed to feel threatened by it. I was not taunted by classmates and didn't go to church much. So I can still dance with the old lady, makeup running now and lesions showing through but still masquerading as the bride of Christ --- at arm's length, recognizing the snake oil she's selling for what it is. And I'm way too self-centered to engage in much self-loathing.

But poke around a little in the hearts and minds of gay people of all varieties, and I think you'll discover that most us are kind of cobbled together, self-created to a degree that many straight people aren't. Or at least that's what I think. But then heterosexuals always have been and remain mysterious to me --- the exotic other.

Self-creation has been a big factor in the life and work of that accomplished role model Ricardo De Jesus Blanco, too. You can learn more about that by reading here, a blog entry by longtime friend Nikki Moustaki, or here --- a self-revelatory excerpt from a 2012 book, "Who's Yer Daddy? Gay Writers Celebrate Their Mentors and Forerunners."

In the latter, you'll learn a little about how he was shaped by aversion therapy --- administered by a dreadful grandmother who tortured him as a child as she tried to turn the sissy kid he was into the instruction-manual little man she wanted. The result is another reason why the poet makes a good role model.

So far as the grandmother is concerned, well most of my generation comprises grandmothers (and fathers) now. I hope this is not how they'll be remembered as their gay offspring rise and shine. The parents and grandparents of all kids, gay and otherwise, need good role models, too.
Posted by Frank D. Myers at 6:58 AM

Thought-provoking and well done. As always.