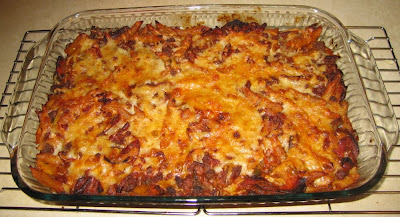 It's 12 degrees here this morning, which seems cold after a succession of mild winter days. But better than the 3 degrees a couple of nights ago --- and the 4 predicted tonight. Once a hardier north Iowan, I've gotten soft --- and didn't even go outside on MLK/Inauguration Day. That couldn't last.

I cooked cavatini Monday, while watching the inaugural parade off and on, part of the continuing strategy to fix stuff that freezes well and then (alternating with something else that freezes well) going several days running just reheating and adding salad and dessert (currently an orangy dark gingerbread cake with vanilla ice cream, but that's another recipe). If something doesn't turn out quite the way you'd hoped --- just drink a glass or two of wine with the meal and it begins to seem as if it did.

Wine isn't necessary (although still nice) with this recipe, assembled from several sources, although I pushed it close Monday by overcooking slightly. That happened because once every six months or so after preheating the oven, inserting what's to be baked and setting the timer I inadvertently turn the oven off. Don't know why this happens, but blame the location of controls on the stove --- not mental state. This confuses the timing issue. Anyhow, here's what you'll need:

Cook beef, onion, pepper and garlic in a dutch oven until the hamburger has browned. Add water, tomato paste, mushrooms, pepperoni, spaghetti sauce mix and Italian seasoning. Mix well, bring to a boil and then lower heat and simmer uncovered for an hour.

Meanwhile, cook the pasta according to package directions and set aside (tossing with a little olive oil if there's going to be a delay).

After the simmering hour is up, add the pasta to the sauce and combine well, then pour into a buttered 9-by-13 baking dish and bake 30 minutes in a pre-heated 350-degree oven. After the half an hour, sprinkle the mozzarella over the top and continue cooking 15-20 minutes more.
Posted by Frank D. Myers at 6:05 AM