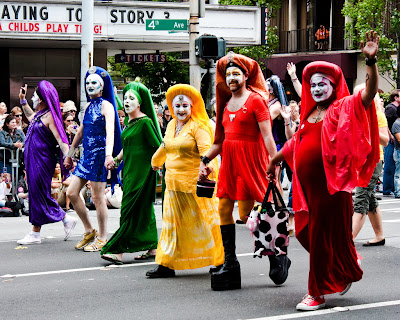 
THE SISTERS OF PERPETUAL INDULGENCE: Charity, protest and street theater organization. Not everyone is amused by the Sisters of Perpetual Indulgence, but by gum the group --- now with affiliates worldwide --- originated in Iowa (Iowa City, as you might expect).

The sisters premiered as such in 1979 in San Francisco's Castro district, but originated during 1974-76 at the University of Iowa when Ken Bunch, with Fred Brungard an organizer of the first Midwest Pride Festivals, also organized a traveling drag troupe called the Sugar Plum Fairies. The nun habits came from a convent in Cedar Rapids where Mother Superior was told a production of "The Sound of Music" was planned.

Bunch and Brungard also became the first Iowans to apply for a same-sex marriage license --- on June 9, 1976. The application, of course, was rejected.

In 1977, Bunch moved to San Francisco --- taking the costumes with him. Brungard joined him there a year later. Bunch, Brungard and Bruce Golden loosed the sisters on San Francisco on Holy Saturday, 1979. The emergence of the sisters coincided with the beginnings of the AIDS pandemic, and the sisters became leaders in AIDS education and fund-raising for AIDS-related causes. That continues to be part of their mission, as is raising money for a variety of other causes. Sisters also stage events to call attention to intolerance and satarize issues of gender and morality. The costumes --- and the makeup --- have changed considerably over the years. Deceased sisters are referred to as Nuns of the Above.

Response to the sisters varies, both within and outside the LGBT community. Their parodies of Roman Catholicism receive the harshest criticism, but such stunts as "hunky Jesus contests" tend to draw ecumenical fire.
Posted by Frank D. Myers at 7:16 PM