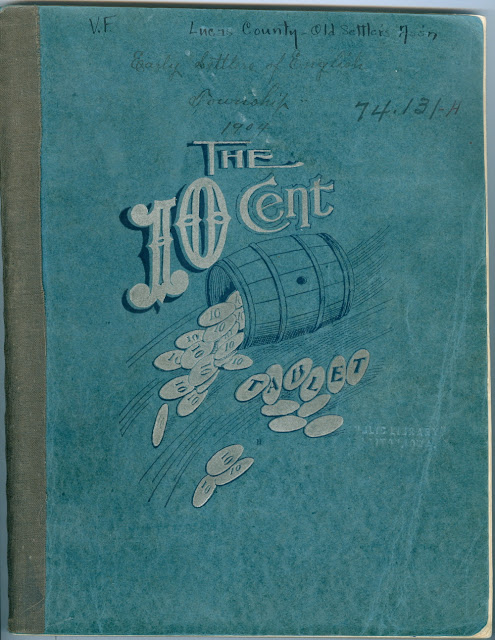 This little notebook, dating from the turn of the 20th century, is one of Lucas County's little treasures --- a compilation of handwritten biographies and reminiscenses regarding some pioneers of a neighborhood in English Township, south of Newbern. The compiler was Thomas Marshall Dunshee, motivated to undertake the task by the formation of Lucas County's first historical society.

That historical society was an Iowa pioneer, but short-lived. The pioneers themselves were interested and involved in the effort to collect their memories --- but their children really weren't. So after a few years, as its founders died, the historical society faded away. It's collection of documents, however, was preserved at the Chariton Public Library, then passed on during the 1970s to the reincarnated Lucas County Historical Society, organized in 1965.

Dunshee's own introduction, on the first page of the notebook, describes how the material it contains was collected: "The within sketches are imperfect, a mere outline of family history as given at the fireside, by the head of the family, as I visited different ones of my neighbors late in the fall of 1903. Since that time all but one or two have passed over the silent river. May 21, 1910. T.M. Dunshee."

The heart of this neighborhood was First Presbyterian Church of English, sometimes called the Cain Church, along the Newbern road. Although the church is long gone, its cemetery --- now known as Spring Hill --- remains.

The fist subject of Dunshee's attention, Duncan Breckenridge, lived just northwest of the cemetery and early plats suggests that it was in part formed from his land.

I was especially interested in a paragraph in the Breckenridge sketch involving a trip by horse and ox and wagon during 1857 to Macon, Missouri, to buy apples --- hauled back to the neighborhood and sold for a modest profit. One of the stops on Sunday's Farm Crawl was the Schneider Orchard, in the same neighborhood, where apples now are grown and sold a little closer to home.

I'll transcribe other material from this notebook as time passes. I'm fairly sure an earlier transcription may be found in the Lucas County Genealogical Society library --- but will have to check for sure.

Duncan Breckenridge was born in Scotland May 18, 1825. At the age of six years his father emigrated to the United States and settled in Washington County, Ohio. He was married in June, 1856, to Miss Margaret Dunlap of Ohio. Her parents, Alexander and Elizabeth Reed Dunlap, died in Scotland. The children, seven in number, came to this country and settled in Ohio.

Duncan and Margaret Breckenridge have had born to them five children, one son and four daughters, David A., Jane Elizabeth, Charlotta Bella, Martha Annetta, and Margaret, the latter dying in infancy. Jane Elizabeth died October 1st, 1886, and the rest are still living.

Mr. Breckenridge remained on the farm in Ohio until after he had attained his majority when he determined to try his fortune in the far west. He came to English in 1854, coming by the way of Lake Michigan to Chicago and to Rock Island by rail and thence by stage to Knoxville and overland to Newbern, Iowa. At that time there were but few settlers. The Rev. Joseph Howard and John Graves were the only old men in the community. The settlers were nearly all young men and women.

Mr. Breckenridge purchased of J.W. Runnels 120 acres situated in section eight. This place had a log cabin in the north forty. He owns at the present time 280 acres.

There were no churches, no school houses, and meetings were held in private houses or in groves. The common mode of travel being the wagon and ox team. Money was scarce; farmers were not able to hire, consequently neighbors had to exchange work back and forth. Market privileges were poor; the stock men that bought cattle and hogs had to drive to Eddyville, Burlington or Keokuk so that they could not pay good prices to the farmer and the farmer as usual had to content himself with what was left.

Milling was done at Red Rock on the Des Moines River. Corn was ground at Squire Ramsey's on Big Whitebreast, Liberty Township.

Mr. Breckenridge says, "William and Isaac Graves met at my house and we organized the Graves District. A tax was levied to build a school house as was done the same spring at the Foulks, Renfro, Mason and Spray Districts. Thus provision was made for the building of five school houses in the Township. This was in 1856.

"One evening in January 1857 there came to my house a man with wife and child wanting me to take them to Chariton. He had broke his buggy, so I hitched my ox team to the wagon and fastened the buggy on behind and we started. The day was not very cold. My man was an Irishman and like many of his kind was witty and jovial. Before we arrived at Chariton the weather turned colder, a blizzard came up from the northwest which filled the air with snow. The hotelkeeper and the Irishman both insisted on my staying all night, but I told them that my wife was alone and no one to look after the stock. I made the trip back but did not reach home until a late hour. My feet were so badly frozen, could not remove my leather boots, so had to take my knife and cut the boots to get them off. My feet were swollen and turned black. My wife got turnips from under the floor where we had them buried and made a poultice and placed on my feet, which relieved me of the severe pain. She then greased my feet with chicken grease. The nails afterward came off. My experiences that night has never been forgotten, the slow plodding of the ox team, the dim prairie road with but four or five cabins in the ten miles between my place and Chariton.

"About the fall of 1857 in company with James Leeper, George Leeper, and John Rogers went down to Missouri below Macon City for apples. Our teams consisted of two yoke of cattle and wagon and two teams of horses. We camped out and did our own cooking. We purchased our apples of Mr. Blake, a slave-holder, for thirty cents per bushel. We told the black boys to pitch in and help load the apples and they might go to a show that night at Macon. The darkies seemed to think pretty well of their master. They made quick work of loading the apples. Mr. Blake gave each one of them twent-five cents which made their faces shine. The apples that we purchased were hauled to Lucas County, a distance of 160 miles and sold for one dollar and one dollar and a quarter per bushel."
Mr. Breckenridge speaks of the leading merchants of Chariton back in 1854 as O. L. and Tom Palmer, Henry Simpson, old Billy Lewis, and Vansickle.

He has engaged in general farming, and for many years made a specialty of raising hogs of which he has been very successful. He is a careful man in his business methods, a man of good judgment. His father and mother were staunch Presbyterians. His wife and daughters are members of the First Presbyterian Church in English. While not a member himself, has always lent a generous support to church work. He was assessor of the township for a number of years and trustee, has been justice of the peace, and during the early days of English Township was one of the prominent figures. They are spending their delining years in a good home with plenty of the comforts of life. In politics, he is a Democrat, a typical gentleman of the old school. 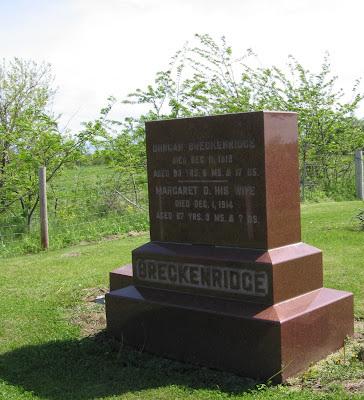 Duncan and Margaret Breckenridge and their daughters are buried in what now is called Spring Hill Cemetery.