Shoveled out, souped up 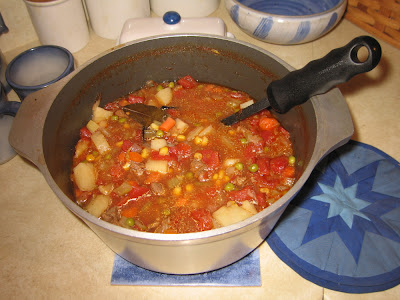 Zero before dawn here this morning, but it looks like minus-9 in Mason City (I check conditions there sometimes to remind myself of how glad I am not to live in Cerro Gordo County still in the winter). We might get up to 11 in Lucas County today, but the predicted high up thataway is zero. See what I mean? Brrr.
I've received a couple of phone calls, e-mails and Facebook messages congratulating me on the volume of snow in the front yard (it looks a little like much of what fell in the neighborhood gathered here), but the driveway is clear --- thanks to neighbor Don who came over with his snowblower as I was starting to chip away at it at midmorning. That's an amazing little machine --- took on drifts more than twice its height without wavering.
The big problem with the driveway is that the lawn rises to alley level north of it creating when the wind is just right the effect of living on the wrong side of snow fence. It's nice to think some of this will melt before the next major deposit, but that's a wait-and-see issue. Back in the good old days when I lived in Winnebago County there was the winter when the snow finally got so high on both sides of the drive that new accumulations could neither be shoveled nor blown over it --- had to get a tractor with a blade in to push it way back onto the lawn and that created the look of life in a parking lot.
+++
I could have taken a photo of the driveway, but that would have involved getting wrapped up and going outside yesterday afternoon. So I took a photo of the soup instead --- one more recipe and then I'll get off this Food Channel kick.
Keep in mind I'm not a foodie and will eat what ever's set (or that I set) before me --- and if it tastes good, don't get bored with repetition. So day after day I eat soup (rarely out of a can) at one meal --- quick, easy and simple to make; stores well; few dishes to wash when it's reheated. This recipe will (and has) fed 10, or keep me in soup for a week.
VEGETABLE BEEF SOUP
1 pound stew meat (bite-sized)
1 chopped onion
3 stalks celery, diced
1 big (or about 10 "baby") carrot, sliced or diced depending
2 potatoes, diced
1 cup frozen corn
1 cup frozen peas
2 14-ounce cans diced tomatoes with juice
2 14-ounce cans beef broth
4 cups water
2 bay leaves
2 teaspoons garlic powder
2 teaspoons hot pepper sauce
Brown the beef in a dutch oven or soup kettle; remove beef and sautee onions and celery in same; add beef and all other ingredients except the peas; bring to a boil, then reduce heat and simmer for an hour; add peas; cook at least a half hour longer.
Personally, I think the soup still is a little watery after an hour and a half and except in emergencies allow it to cook longer. Don't be frightened by the pepper sauce --- it sharpens the flavor but does not make the soup "hot" --- unless you want it to. If you do want it to, add it along with the peas after an hour and you'll get more bite.
Posted by Frank D. Myers at 7:53 AM

Sounds like you had more snow that we did. I deemed it not even worthy of shoveling off the drive though looking at the forecast this morning, perhaps I should have since it might not melt anytime soon.

By the way, I made your scalloped corn recipe this weekend and it stole the thunder from the ham and scalloped potatoes that I made with it. I ended up eating more of the corn dish than the others together. Thanks for posting and it will be a regular in our household especially when we have farm raised sweetcorn to put in it!

Think my new snow fencing is helping but discovered I need to park the car someplace else before a blizzard as it caused a big drift right across the sidewalk. Can't really complain, was not that much to shovel.

Sallie (the now indoor cat) made it outside this afternoon, just had to check for those "messages." Her smaller feral brother Pumpkin decided sleeping on a heating pad in my three season unheated porch was way better than being outdoors. By this afternoon we were good buds, even allowing me to pick him up and he snuggling my face, who knew!