Keep on the Sunnyside 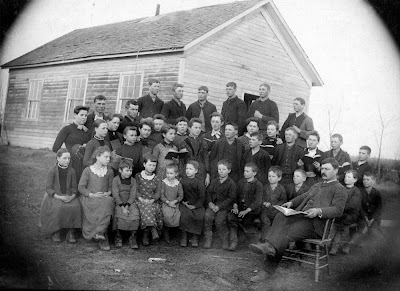 This photo of Sunnyside School, its scholars and their teacher, R.J. Woody, was taken during December of 1889. Identifications are below.
This old photo of scholars and their teacher at Sunnyside School predates Mother Maybelle and the rest of the Carter family by a good many years, but when you're reaching for a play on words, who cares?
This was taken during December of 1889, and it must have been quite an occasion. All the students are dressed in their Sunday-go-to-meeting best and I recognize the dresses and neckaces the Miller girls are wearing from a portrait of Joseph Cyrus and Mary Elizabeth (Clair) Miller's brood that must have been taken at about the same time, although the family portrait obviously was taken at a studio in Chariton.
The Sunnyside district comprised four sections beginning at the west edge of what now is Williamson --- there was no Williamson during 1889 --- in the extreme southeast corner of English Township, so named for English Creek, which rises in the Williamson Pond conservation area and flows down through the Miller farms still in the family before meandering off northeast to Gosport and Knoxville and then to the Des Moines River in eastern Marion County.
My great-great-grandparents, Jeremiah and Elizabeth (McMulin) Miller, moved from Monroe County to a farm just east of Sunnyside during the spring of 1867. Their four younger sons, Richard, James Harvey, Gerial Trescott and Harry, all attended Sunnyside, as did most of their grandchildren and many of their great-grandchildren. Some of the Miller boys taught there, and when the district finally was consolidated and disappeared, Granddad (William Ambrose Miller) received an odd little award from the state that's still around here somewhere acknowledging that Millers had served in various district board positions for a century, concluding with himself as the final treasurer.
Sunnyside, as was the case with most early rural schools, was the only public building in the neighborhood, so it served as a community center, too. Central Christian (Disciples of Christ) Church was not organized until the 1890s, so a Sunday school was organized at Sunnyside and preaching services were held there as well upon occasion. A Sunday school library was maintained at Sunnyside, so that youngsters would have access to elevating literature. Obviously, the separation of church and state in public schools had not yet become an issue.
Sunnyside vanished several years after having been allowed to deteriorate by the people who bought it from the consolidated Chariton school district. If you drive straight east out of Williamson to the "T," Sunnyside was there. A rickety old trailer house sits on the site now.
The teacher, seated in the foreground here, is R. J. Woody.
Seated in the front row are (from left) Emma Miller, Maude Brown, Anna Lawson, Louella Brown, Myra McDowell, Adda Miller, Otis Brown, Frank Patterson, Jimmie Brown, Chas. McDowell, Arthur Bungar and Lawrence Avitt.
The older boys standing at the back are (from left) James Brown, John Williamson, Patres Johnson, Charles Savage, Harry Miller, Dick Foster, Patres Lawson (or Edgerton, Granddad wasn't sure) and Dave Johnson.
Standing in the middle are (from left) Gaybrella Webb, Lizzie Miller, Cora Carson, Ida Patterson, Samantha Foster, Cora Patterson, Cora McDowell, Cora Williamson, Mattie Savage, Willie Miller (my grandfather), Willie McDowell, Laura Miller (Shockley; she had been adopted by Jeremiah and Elizabeth Miller), Harry Edson, Lena Foulks, Harvey Savage, Effie Avitt and Harry Foster. There's a glitch in the identifications in this row. Granddad neglected to identify one of the boys standing to his left, and I don't know which one, so the sequence may not be right.
This is a well-traveled old photograph. Granddad had it, but gave it to my Uncle Owen Miller, who took it home to his ranch north of Buffalo, Wyoming. Uncle Owen sent if off to our cousin, Elizabeth (Miller) Jordan, in Texas. And Elizabeth sent it back to me in Lucas County, keeping the circle unbroken, bye and bye, Lord, bye and bye ...
Posted by Frank D. Myers at 7:26 AM

I enjoy ALL of your work on your blog!!!