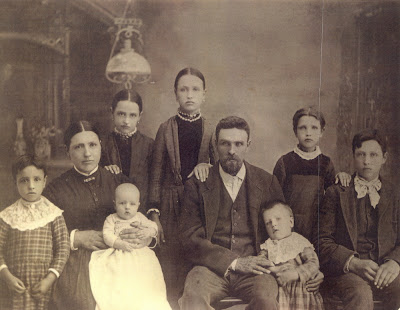 The Joseph Cyrus Miller family in 1890.
Here's a Joseph Cyrus Miller family portrait probably taken during late 1890. Note that Emma and Lizzie are wearing the same dresses and necklaces in both this photo and the Sunnyside School photo, below. Cyrus is seated in the center with Mary Elizabeth (Clair) Miller at his right. The daughters standing are (from left) Cynthia, Dora Emma, Elizabeth Mary and Adda. My grandfather, William Ambrose Miller, is seated at the right. Mary Elizabeth is holding daughter Easter, born Easter Sunday (6 April) 1890. James Clair Miller is at his father's knee. Jeremiah, born 30 April 1892, hadn't arrived on the scene yet.
Five years later, on 26 July 1895, Mary Elizabeth gave birth to the couple's final child, a boy named Joseph Cyrus for his father. The infant was sickly and Mary Elizabeth was not well herself. Medication was prescribed for both. On the 14th of August 1895, Cyrus confused the medications, accidentally giving baby Joseph a dose intended for his mother. The infant died. That tragedy broke Cyrus' heart. On the 15th of November, while hauling a wagon load of hogs into Chariton he collapsed, fell backwards among the animals and died.
William Ambrose Miller, teaching Centennial School that fall, gave up his dreams of pursuing a career in education and came home to help his mother farm and raise the children. Eventually, the family farm was divided, Granddad purchasing the larger portion. Great-uncle Jerry, the youngest son, purchased the remainder. Both farms remain in the hands of descendants.
Posted by Frank D. Myers at 9:25 AM

The account of the family is very nicely presented and informative. I have the photo. You give me more detail, Frank. Thank You, Marilyn Jackson